Home > Buzz Real Housewives of Dallas: God Save the Queen, B...

Real Housewives of Dallas: God Save the Queen, B... 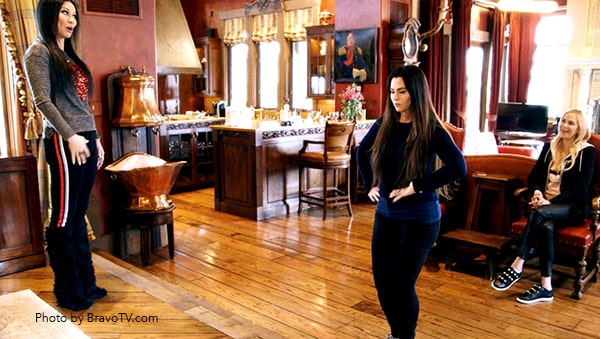 Last week, my boss at my grown up job gave our company (all 10 of us) five days off from work, beginning Thursday. We’re back at work now, and those days off now feel like a dream. Mainly because they went by too fast, but also because when I returned to RHOD, Kameron Westcott was STILL talking about the baby thing and the fight and I thought maybe I’d fallen asleep for a few minutes and had woken up for its continuation.

Yeah, it’s the next day and Kameron has yet to let it go, except now she’s upset about not knowing about Brandi Redmond’s baby AND at words that Stephanie Hollman never said. The words that never happened were “unacceptable”, proclaims Kameron, continuing with, “there’s no excuse for people using poor choice of words.” Especially when they’re one’s made up in Kameron’s head. Kameron goes on and on and on to Cary Deuber when Cary finally snaps, about an entire minute after I had. She tells Kameron that she’s partially to blame for the fight, to let it go, and if she does want to discuss it to ask for clarity instead of basically harping on it for all eternity. She then tells Kameron that, actually, the reason Brandi kept the baby a secret is none of her business, and then when Kameron tries to continue talking about it, Cary keeps shutting her up. #CaryforPresident2020. When Kameron is allowed to speak, she asks what her time limit is for being upset and basically dwell on it, and my vote is less than an episode.

Meanwhile, D’Andra Simmons is telling LeeAnne Locken about the fight, a reason LeeAnne cites for not wanting to drink and hang out with the women the night before. D’Andra has her own fight to worry about, though. She’s taken a page out of Kameron’s book and is STILL talking about the Adderall rumor she started about Brandi, and now she wants to confront Brandi about it. Again. This gives Brandi two fights to worry about. This is also reason number 473 why Cary is my favorite: she has zero fights to worry about.

With everyone fighting, it is now the perfect time for all of them to go snowmobiling. It’s awkward silence until Brandi breaks it by talking to Kameron about what happened and letting her know that she felt targeted. Kameron disagrees and then goes on to tell Brandi that she felt left out but at the end of the day, is genuinely happy for Brandi. Stephanie chimes in and basically apologizes for something she didn’t say, primarily just to keep the peace. D’Andra then steps in and pretty much tells Kameron how it is: she hears what she wants to hear. In attempt to reel back in the peace, LeeAnne tells Kameron not to focus on the words but instead, focus on Stephanie’s inventions, which did not include hurting Kameron’s feelings and I swear to the Real Housewives God, they better be over it.

They manage to make it to their destination (without killing each other) where they grab their gear, grab a snowmobile, and head out. Fun Fact: Stephanie is a horrible driver who has been warned by her husband that if she gets into one more accident he’s buying her the Scooby Doo van. First, who wouldn’t want to drive that? Second, that’s exactly who I would choose to ride on the back of a snowmobile with. They all end up making it to the top of the mountain (in one piece) where D’Andra decides is the perfect place to confront Brandi. She finally apologizes and claims her statement was about her because she has ADD and takes Adderall. “Now it makes sense”, says Brandi. It actually doesn’t but at least they’re past it and they can give being friends a shot. They even make snow angels to solidify their peace treaty.

Now that they’re all friends again, they head back down the mountain and into the cabin where they have some drinks – an action that worked out well the night before. The drinking continues at Kameron’s house where Brandi can’t quit expressing her attraction for D’Andra. They all appear to have a good time until we find out the next morning that D’Andra and LeeAnne got into a drunken, in each others face, fight about who was the queen of the group. That’s not a joke, it’s what happened.

They all sit down to breakfast and because the women have behaved for an entire day, Kameron releases them from the itinerary. They’re free! Before they venture out to do their own thing, Brandi pull Kameron aside to pitch an idea: throw a pageant where D’Andra and LeeAnne are the contestants and actually crown one of them queen of the group. Kameron loves it, but this is all for later. Brandi and D’Andra have some shopping to do.

The new best friends head out for some shopping and drinking. BTW, is it a requirement that you be rich to live in Beaver Creek or can you just like drinking? Asking for myself. Anyway, now that they’re friends D’Andra is beginning to appreciate certain things about Brandi, like her ability to have fun without caring what anyone thinks. D’Andra aspires to be this way one day, but is actually just a few shots away from. Meanwhile, LeeAnne and Kameron are getting massages. LeeAnne can’t believe that D’Andra and Brandi are now friends and hopes that Brandi doesn’t do something to mess it up. Geez. #letBrandibe

The women have all had a grand time being detached from the itinerary. Refreshed, they all meet for dinner. But not just any dinner. No. It’s pageant time. OK, did you know that LeeAnne used to be a pageant contestant? I did not. She’s still got it, too. I guess. I’m not very pageanty. They begin with the question portion. LeeAnne’s question is about her hands, to which she replies her hands are for helping and are from God, blah, blah, blah. Now it’s D’Andra’s turn, and her question is basically what would she do if someone farted in front of her. Her answer was just as good as LeeAnne’s so to me, they’re tied. Next, Brandi tells the girls they have to ask each other a question. And this is where the fun stops.

D’Andra asks LeeAnne does she think D’Andra’s happily married, to which she replies “yes”. Then D’Andra asks why she doesn’t think she can be happily married like her. Turns out, LeeAnne and her boyfriend have been engaged for NINE YEARS. Now that it’s out there, all of the ladies want to know what the deal is. First, LeeAnne says it’s because her boyfriend is in a bad place. Then, she says she’s the one who doesn’t want to get married because she doesn’t want to put him in a position where he’ll leave her. The story just keeps making less and less sense to the point that D’Andra gets in her face and tells her to get it together, which makes LeeAnne start to cry.

This situation is so uncomfortable that even LeeAnne’s eyelash tries to get away. Luckily, its attempted escape lightens the mood and they all tell her they just want her to be happy. And with that, the girls trip is over and the next day they all begin to head home.

BUT WAIT! Who won the pageant?! I’ll tell you. Before they leave, D’Andra and LeeAnne compete in the talent portion. LeeAnne raps and it, well, you have to see it. It’s.. You have to see it. But the real talent came from D’Andra who help a cup with a quarter in it in her butt cheeks and successfully dropped it on the floor. I give you the queen, ladies and gentlemen: D’Anrda Simmons.

Some of these women became friends again pretty quickly, what do you think about it? Do you think D’Andra and Brandi’s friendship will only survive with alcohol? Will LeeAnne’s relationship survive after that intervention? Do you think Kameron is really over the baby thing? Comment below!

Be the first to leave Comments for Real Housewives of Dallas: God Save the Queen, B…