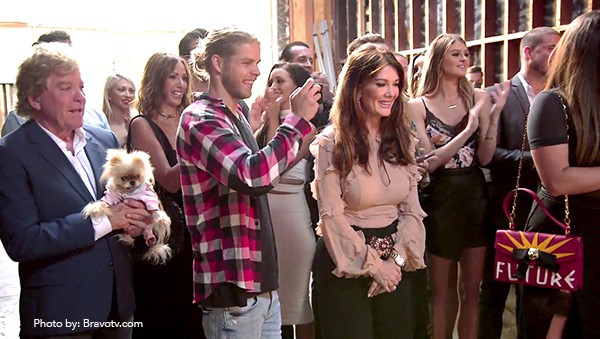 We made it. We’re here. 117 years later, we’ve reached the end of the season. I’ve aged an eternity. What year is it? I’ve invested so much time in the show I’m confused when I don’t see myself in the opening credits. Where was my invite to the TomTom Progress Party?

While they prepare for the party, the rest of the group gets ready. Jax Taylor gets dressed for the party, knowing he’s going to run into Brittany Cartwright. He’s been texting her and just can’t believe that she hasn’t text him back. Maybe Kelsey knows why? Meanwhile, Brittany is getting ready in her hotel with Stassi Schroeder. Earlier she stopped by the apartment to get clothes for the party and ran into Jax. They discuss what’s going to happen next: Brittany says she’s keeping the apartment, Jax says he’s staying in the building. She’s p**sed but manages to maintain her ability to do her makeup like a pro. I must be watching the wrong YouTube tutorials.

The Tom’s arrive at TomTom to prepare for the party; guests begin arriving shortly after. Everyone is impressed; now there’s tangible proof that the bar exists. Katie Maloney-Schwartz is excited about the prospect of one day achieving Lisa Vanderpump money. Ariana Madix is excited about the prospect of getting a bar stool with her name on it and being able to proudly share that her boyfriend is a 5% owner of the bar. #goals.

Unfortunately, Brittany doesn’t have the same excitement to share. She tells Kristen Doute and Scheana Marie about her fight with Jax and ponders why he isn’t moving to Florida like he kept telling everyone. At that very moment, Jax conveniently walks in, followed by a much more welcomed Ken and Lisa. Sandoval is excited to show Lisa his new contraption: a machine that freezes shots. Somehow he’s the only one in the nation to have one, but since this was filmed 100 years ago there’s probably at least one more bar that has one. After showing Lisa his machine, he shows her the uniforms he’s picked out for the bartenders. They’re actually really nice – the shirts don’t need to be ironed and instead of name tags or the need for screen printing, bartenders will be given TT pins. I want one. Lisa is impressed, the Tom’s have actually put some work into the bar. Schwartz is thrilled, he’s one step closer to realizing his dream of being Ken with a bad Australian accent.

From impressed to disgusted, Lisa addresses Jax, letting him know she would like to speak to him later. Naturally, he reacts like the world’s oldest 15-year-old, telling her he’ll leave if she wants and acting as obnoxious as he can.

Following this exchange, Sandoval walks everyone to the back to show them where the patio will be. Stassi likes it because it’s unfinished so she can bury bodies there, Kristen likes it because the bar is next to Pump and she’s ready to take her alcoholism to another level. Then this party takes a turn for the better. Scheana finds a pink hardhat (how convenient), puts it on, walks over to Rob and says “I’ll be wearing this later tonight.” Crickets. She says it again. Louder crickets – they’ve been drinking Sandoval’s new cocktails. Rob couldn’t have ignored her more than if she were watching the show from home alone and saying it to the TV. She’s really owned the role of making all of us uncomfortable.

While Scheana fails to get the hint, Jax talks to James Kennedy and congratulates him on his performance. Then, after being a complete jerk to James, goes into detail on why he broke up with Brittany, to which James replies “well I heard she went home with someone she met and In&Out Burger.” A less drunk James is a wittier James. Scheana is off taking selfies so Rob is able to make his escape. He joins Jax and James’ conversation, finding common ground with Jax as they both claim they don’t want to get married. Not to spoil the rest of the episode, but the validation Jax got from Rob reaffirming that Scheana’s relationship is all in her head is the only good thing that happens to him that entire night.

The party is wrapping up but before it does, the Tom’s pay Lisa the remaining $50K, and Ariana gives Sandoval a present that consists of a bottle of champagne and some sort of bartender machete to open it. Lisa ends the party with a speech, expressing her pride in watching everyone grow up, followed by mentioning the people who haven’t, looking right at Jax – what the kids call “throwing shade” if you will. Following the speech, the party moves over to Pump.

Shortly after arriving Patrick shows up, which makes Stassi giddy with delight as she can finally show people that he’s real. Stassi cannot wait for him to meet Lisa, which goes awry in mere moments. It turns out that Lisa has already met him. While doing a radio show in New York she located Patrick and waved hello. He remembers meeting her as well, commenting on “the view as she walked away.” A sane woman would take him back to TomTom and bury him in the back before they pour the concrete for the patio. But Stassi isn’t herself around him, giggling as he condescendingly answers Lisa’s questions about their relationship. Stassi is so blinded by love that when Lisa asks if she’s drunk, she gets offended and walks away, telling Lisa she’s going to protect her relationship.

Lisa sits down with Katie and they discuss Lisa’s encounter with him, expressing her concern for the way Stassi acts when she’s around him. Lisa decides to be the bigger person and walks back to their table to clear the air. Since Patrick is a colossal douche, how do you think that went? Patrick continues to comment on Lisa’s famous derrière before getting offended when Lisa tells Stassi that she just wants the best for her. Eventually, Lisa walks away and STASSI APOLOGIZES FOR LISA’S BEHAVIOR AND THEN BEGS HIM NOT TO BREAK UP WITH HER. I had to write that in caps because even I was blown away to see her act so opposite of all her murder talk. They’ve royally annoyed me so they leave. You’re welcome, viewers.

The night is almost coming to an end but before we get to the final showdown a few more things happen. James joins Ken and Lisa at their table; Ken tells James how much better he’s doing and then gives him an envelope full of money. Lisa follows that up by offering him his job back. James puts it best when he walks over to the bar, shows off his money and the fact that he got his job back and proudly proclaims: James = 1, Jax = 0. He’s not wrong, you know.

Meanwhile, everyone is telling Brittany how awesome she is, Lala Kent tells her that even “her man” thinks she’s hot and wants to pay her bills too, then Adam joins in on the praise of Brittany, all while Jax is watching.  Who’s not watching are Tom and Ariana – they’re happily making out which is a far cry from where they were a millennium ago when the season started. I’d already forgotten they hated each other, but thanks to Ariana refreshing my (I mean, our) memory, I began to remember and it’s nice to see them getting along again. Well done, you two.

Good for them, but don’t get too comfortable with the happiness. A while later, Brittany heads over to Jax and asks the Tom’s to excuse them. Brittany is p**sed. She tells him how wrong he was for the laundry list of nonsense he put her through. He isn’t done, though. He tries to make her, and us, believe that he does everything for her, which she shuts down in a heartbeat. Because he can no longer make her believe his lies, he gets up and walks away, letting her know that Jesus Christ can’t make him move out of that building. WHAT ABOUT FLORIDA, JAX?

Like the relationship Scheana believes she’s in, I’m convinced this job was pretend. (I can’t wait for the reunion!) Anyway, Jax isn’t finished getting his ass handed to him by women. Lisa pulls him outside to talk. He immediate begins with “You look lovely, I’m sorry for everything.” Lisa FINALLY isn’t having it. She reminds him of his actions, reenacting that tantrum he threw at SUR to give him the full effect. He replies with “I’ve ruined everyone’s life and I don’t know what to do anymore.” He follows up with “what do you want me to do?”, to which Lisa replies “grow the f*** up.” Then we’re given the answer to the question we’ve been asking since we saw the scene from a few seasons ago that showed his house decorated in items he stole from SUR – Lisa won’t fire him because she doesn’t want to give him the satisfaction of continuing to play the victim. Instead, she wants him to do what he should’ve done a long time ago: give her his resignation. AND HE DOES! Bye Jax!!

Record scratch: while I’m trying to be optimistic this isn’t the first time he’s quit. He quit in season one and ran back like 4 minutes after filming stopped. So I’m not convinced that he’s gone just yet.

What do you think? Is this it for Jax? Will he go to Florida just to prove us all wrong? Will he finally grow up? Comment Below!

one Comment for Vanderpump Rules Recap: Welcome to TomTom