LHH Round-Up: Apryl Is Playing With Fire And Two Men!

Don't shut me out. 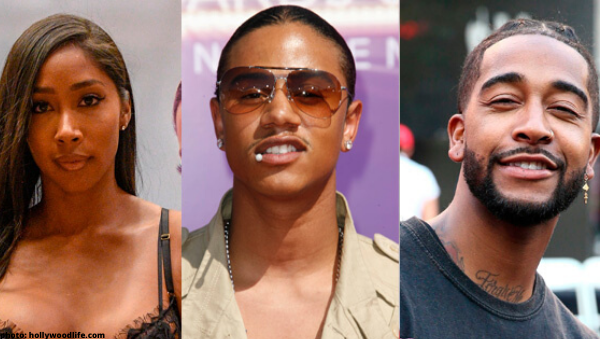 In the world of Hip Hop money talks, actions speak louder than words and no matter who you are the truth will always come out. You can only hide for so long and what is done in the dark will come out in the light to hurt those closest to you. Think before you act.

Love & Hip Hop Hollywood stars Lil Fizz and Apryl Jones made their relationship official on the show, however they became Instagram official over the weekend.

The couple have spent much of the season as well as months prior to this building a very particular narrative.

Fizz helped Apryl heal from her breakup with Omarion, the father of her two children and his bandmate. Apryl in return has spent months defending Fizz against Moniece Slaughter, the mother of his son.

Omarion has yet to make a statement about the new couple.  And Apryl has not taken that deflection well.

Good things come to those who wait.

The more Apryl posts the more fans and even male celebrities have gone on the attack.

Apryl Jones doesn’t have time to be upset. As we all know, Apryl Jones and Fizz are very much a couple proving that Moniece Slaughter was right all along when she dropped hints about the duo’s relationship many episodes ago on Love & Hip Hop: Hollywood. Joe Budden responded to the coupling on Twitter just yesterday when he wrote that Omarion (Apryl’s baby daddy) doesn’t get “enough credit” considering he and Fizz are B2K members. “Lol #MrPumpitUp clout chasing now,” Fizz responded. Now, Apryl has come through with a response of her own when she uploaded a video to Instagram that sees her going off about how happy she is and questions why everyone’s so mad. “It’s the best dick of my life. It really genuinely is, I can’t even be mad I can’t not be happy because the happiness comes from just being happy. […] Ya’ll tryna really make me mad but I don’t know how to be mad, I’m not a mad person,” she said. The rest of the video sees Apryl explain how happy she is to have a great group of friends and a partner to get sexual with. We can only assume that man laughing in the background of the video is Fizz himself – check it out in the FULL story at www.itsKenBarbie.com Thoughts? #apryljones #lilfizz #airfizzo #omarion #b2k #babymamadrama #monieceslaughter #lhhh #loveandhiphop #loveandhiphophollywood

Love & Hip Hop New York star and former rapper, Joe Budden of course had to step in and provide a little commentary.  Because you know, when is he not running his mouth.

He praised Omarion for not feeding into the drama and called Fizz a clout chaser for being a party to the nonsense.

Moniece has chosen to not be the bigger person.

#PressPlay: #MonieceSlaughter talks about what has been going on between her #Fizz and #AprylJones!!

Fans have thrown their support towards Omarion and pretty much called Apryl out on her attention seeking behavior.

Through it all Omarion remains unbothered.

Love & Hip Hop New York’s Rich Dollaz spent some time this last weekend behind bars after he was arrested for failure to pay child support.

According to sources Rich was arrested on October 24 at his home in New Jersey as he owes nearly $200,000 to the mother of one of his four children.

This is the third time on record that Richie Boy has been arrested for failing to take care of his kiddos.

Back in October of 2014 and then a year later, he was arrested for failing to cough up $30,000 for his then underage daughter Ashley Trowers who has appeared on LHHNY multiple times to provide Rich with a semblance of a storyline.

While he may have fallen on hard times, closed his restaurant Get Soul in New Rochelle, NY and hasn’t produced an artist in my lifetime; the kiddos still need to live.

Daddy’s Up to His Old Tricks

Most of the bigger names on Love & Hip Hop boast about the money they made and are still making.

For Love & Hip Hop Miami rapper and star Trick Daddy, it looks like the money train has dried up.

Trick filed for bankruptcy listing more than $800,000 owed to creditors.

According to court documents obtained by The Blast, the rapper filed for Chapter 13 bankruptcy on August 6.  He previously filed for bankruptcy three times and all cases were dismissed before his debt was discharged.

Sounds like Trick has a history of getting those pesky debts handled.  Maybe he’s smarter than the rest of us.

According to documents, Trick has $0 in his checking account and the stock in his Trick & Rick Music Publishing company is worth $0.  You buying that?  Yeah, me neither.

His debts include a mortgage, homeowner’s association, credit cards, back taxes and back child support.  What is with these men not paying their child support?

Will Apryl lose interest in Fizz once Omarion gives her the attention she wants?  Would you have your ex arrested for failing to pay child support?  Let me know in the comments below.

Be the first to leave Comments for LHH Round-Up: Apryl Is Playing With Fire And Two Men!