The two went IN today on social media. 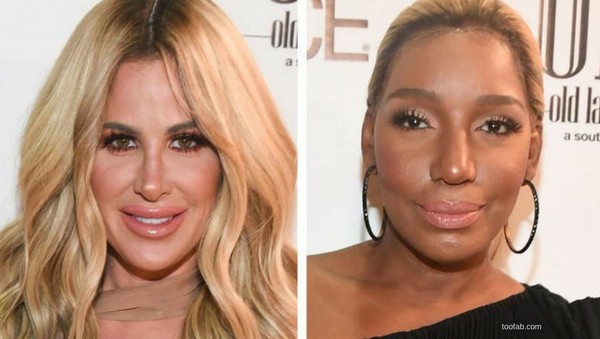 If there was ever any hope of NeNe Leakes and Kim Zolciak-Bierman making up after Roach-gate, think again. The two were at each other’s throats today on social media after the announcement that Sheree Whitfield’s recently confirmed boyfriend, Tyrone Gilliams, will be released from prison in 2022. NeNe, who has a very sordid history with the convicted inmate, fired the first shot over the news earlier on Instagram, where she wrote, “Well i guess we know who the real lier [sic] is after all.” On the same thread, Kim clapped back at the comment, saying “Learn how to spell LIAR!! Your whole life is a lie.” And those were some of the nicer things the two said to each other.

If you remember, NeNe and Tyrone have a sordid he said-she said history. In an earlier episode of The Real Housewives of Atlanta in January, Tyrone told Sheree on a phone call from prison that NeNe had tried to pursue a relationship with him while she was divorced from her now on-again husband Gregg. NeNe adamantly denied the accusation and on a later episode while the ladies were in Spain, tried to clear the air about her relationship with Tyrone,

Tyrone was also at the heart of one of the most epic blow-ups in RHOA history when he let it slip that NeNe had called him privately to negotiate a higher appearance fee than Sheree and Kim for an event he was booking on their behalf in Philadelphia.

The drama really got heated earlier today when the news dropped that Gilliams, who was arrested and sentenced to 120 months in 2013 for securities fraud and wire fraud charges, will not be released from prison until 2022. As RadarOnline reports, despite Sheree’s belief that Tyrone would be released early for good behavior, his efforts for an early release were blocked by a New York federal court.

That’s when things took a turn for the nasty. Taken from the  The Real Housewives of Atlanta Instagram account, NeNe made several pointed comments about Gilliams whom she calls “LIE’rone.”

Kim stuck up for Sheree, telling NeNe “Learn how to spell LIAR!!” To which NeNe fired back, “Kim mad cause you fired #rottenpeach.”

NeNe then posted a handwritten note on Instagram, where she has playfully re-worded the Erykah Badu song “Call Tyrone,” about a woman who breaks up with a no-good man, to say “You better call LIE’rone CALL’em.”

Then NeNe and Kim took the fight to Twitter, where the two went head to head for hours trading blows against past grievances and Kim even insinuated that NeNe “has to be on something.”

This is exactly why I said this bitch has to be on something. She's insane! Nobody wanted to be befriended by a bitch who consistently shows their ass. WE know who you are. The REAL you! Nobody values your friendship. Haven't for years! You have victims not friends.

NeNe, who dubbed Sheree “Wigfield” and Kim “Cigarette Breath” shot back saying that they, “tried 2 discredit me all season long! i pursued LIE’RONE, i stalked LIE’RONE, i got mug shots, my husband old meat, i did mortgage fraud & credit card fraud! They came n2 my house wit ROACH gate, I’m on drugs etc. I tried my best 2 befriend them but This is why U can never WIN when U play DIRTY.”

“The bug was in your house just a few months ago. FACT what else?” Kim fires back.

"Cigarette breathe? I haven't smoked a cigarette in years. The bug was in your house just a few months ago. FACT What else?"

“This is why I CHOSE NOT to do a show wit your lying miserable ass!” NeNe responds. “Remember that b**ch!”

@Kimzolciak this is why I CHOSE NOT to do a show wit your lying miserable ass! Remember that bitch! Yeah they made up an excuse 2 help u b/c i didn’t want to work wit yo ass (our schedules didn’t line up) I’m more than happy you have your OWN show that you DONT deserve #facts

@Kimzolciak i can speak a lot of FACTS so you might wanna shut the fuck up! I never LIE because i don’t have too☝🏾

And finally, in an attempt to end the madness Kim tried to sign off, but not before getting her final shots in, “I pray to god I’m not this miserable and bored at 50.” Ouch.

I pray to god I'm not this miserable and bored at 50 Imagine being so sad and stupid that the only time anyone's mentioning you is if you're mentioning someone you "have no time for" off to film my OWN show! Have a great day you guys! Stay blessed not stressed/pressed

But of course NeNe was not going to let Kim get the last word #rottenpeach.

What’s wrong with Costco though, NeNe? It looks like the two will never mend their old wounds and this fight has gone beyond petty. But I think we can all agree on one thing: Sheree, TYRONE HAS GOTTA GO.

Let us know if you’re Team Kim or Team NeNe in the comments!