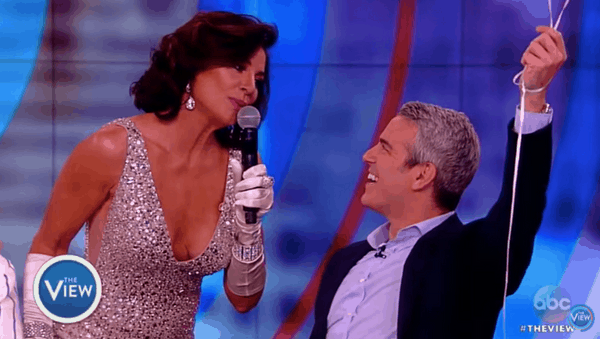 We guess she’s a Marilyn! Things got very retro on today’s episode of The View, when Real Housewife of New York, Luann de Lesseps surprised Bravo exec Andy Cohen for his 50th birthday.

The Countess made a surprise appearance on the daytime talkshow where Andy was a guest, performing a sultry (and highly auto-tuned) version of “Happy Birthday,” much like Marilyn Monroe did for John F. Kennedy for his 45th.

The Bravo host had been telling the ladies that for his 50th he was going to keep things low-key, saying, “a friend of mine is throwing a little thing and otherwise I’m just going to chill out.” Guess again, Andy!

After Luann finished her sexy song, Andy remarked that she “looked like a piece of cake!”

Luann, who has been headlining in her own cabaret show called, “The Countess and Friends,” has allegedly told friends that she wants to take her show on a national tour, according to Page Six.

A source tells the site that, “In spite of everything, she’s feeling really great about herself. Like, really great. It’s all because of the [cabaret] show.”

Thus far the reviews for the show have been mostly positive and Luann has successfully made a run in two major markets, New York and Los Angeles.

More from Taste of Reality: Cat Got His Tongue! Andy Cohen Scrambles to Do Damage Control After Interview Supporting Kim Z.

She then invited the cast to come to her performance. And I for one, would pay good money to see Whoopi Goldberg watch Luann de Lesseps sing.

Would you go to Luann’s show if she came to your town? Let us know in the comments!