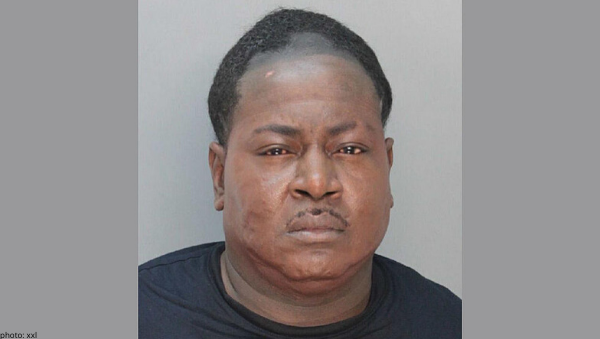 Love & Hip Hop Miami star and rapper, Trick Daddy was arrested early Saturday morning after leaving a club in Miami Gardens.  The rapper was pulled over following a call to Miami-Dade County Police of a driver hitting signs and running red lights while driving a dark colored Range Rover.  According to reports, when police knocked on the window the “driver appeared to be asleep behind the wheel”.

Trick Daddy, whose real name is Maurice Samuel Young, told police that he had been out clubbing earlier that night where he consumed five drinks. Trick shared that he was on his way home after dropping someone off.  Police recognized that he was intoxicated as his speech was slurred and his eyes were glassy.  Trick agreed to a field sobriety test which he of course failed.   He was then taken into custody under suspicion of DUI.

The good times kept rolling for Trick.  While in the middle of being booked at the Hammocks District Station on 142nd Avenue, cops found two more surprises.  Not only did Trick have cocaine on his person inside of a dollar bill, he was also sitting on an outstanding warrant for a separate DUI case.

The rapper was remanded to the Turner Guilford Knight Correctional Center and his bond was set for $6,000.

Trick Daddy has since been released from lock-up and clapping back at his so-called haters for snapping jokes about his most recent mugshot. I’m pretty sure that isn’t where his energy is best served right now.

Trick has released a statement regarding his mugshot and shared that his hair loss is as a result of an undisclosed battle with Lupus. And while I’m not accusing him of lying I do think that his defense has become a little bit stronger.  But I’m not a Lawyer so what do I know?

HU Staff: Kecia Gayle @kecia.kae Following Trick Daddy’s recent arrest for DUI and cocaine possession, we saw a whole bunch of memes created after Miami police released his mug shot. ——————————————————————————————— The shocking picture showed the rapper and “Love & Hip-Hop: Miami” star with missing hair and a pushed back hairline. Twitter users immediately poked fun at the pic and even photoshopped some new hairstyles for him. ——————————————————————————————— While it was unclear why he was missing parts of his hair at the time, a close source to Trick has revealed to TMZ that he reportedly suffers from lupus, which is known to affect almost any part of the body. Despite that, the source shared that Trick is completely unbothered by the jokes and doesn’t care one bit about what the “ignorant” people has to say. ——————————————————————————————— Read more at thehollywoodunlocked.com, link in bio.

Will Trick receive a jail sentence for this?  Which punishment fits the crime?  Let me know in the comments below.