LHHH stars Apryl Jones & Fizz Break Up to Make Up

Haters Gonna Say It’s Fake, Because It Is? 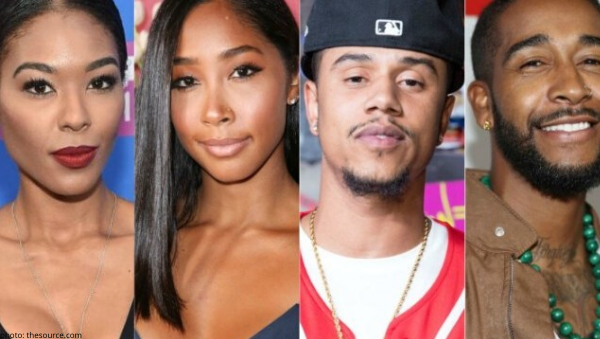 Love & Hip Hop stars Apryl Jones and Fizz have been busy this last week.  These two cannot just break up and let us all go about our merry way.  No, we must continue to speculate on whether or not the couple that may or may not have ever been a couple is indeed broken up or still together.

Early last week, Apryl and Fizz unfollowed each another on social media.  This had their followers and doubters in uproar.  Are they still together?  Were they ever together?  Is this all for clout?  What is happening in LaLa land?

It took several days for Apryl to finally speak out and confirm that the two had indeed split but will remain friends. Apryl finally answered questions about the rumored breakup when she sat down on “Out Loud with Claudia Jordan”.

Apryl’s direct quote was “umm, you know, Dreuxis a great man and his focus is on Kam. My focus is on my children. We are where we are. I kinda want to leave it there.”  She spoke a little on how she felt judged by celebrities and fans who were against the relationship.  Apryl also wanted the world to know that she is not the Yoko Ono of B2K and stressed that the group was broken up before the two started dating.

Basically, the two like being in the spotlight and have next to nothing going on right now so they want to keep the gossip lines open.

And then things got real when scorned ex and baby Mother Moniece Slaughter decided to reveal all.  Well perhaps her version of “all” but I’m here for it.

Moniece spoke with Baller Alert and called the duo out.  She disclosed that the two are still together and according to Moniece although the two have unfollowed each other on social media and haven’t been seen together in weeks, they are not broken up.

Homegirl proceeded to go IN on the duo.  She shared that the two are still living together and several of the recent photos that she shared with her daughter and friends recently were taken in Fizz’ home.  And while there was a rumor circulating that Apryl lost custody of her children to Omarion according to Moniece that is untrue.

Baller Alert Exclusive: Moniece Slaughter Confirms Apryl Jones and Lil Fizz Are Still Together; Says Jones Deleted Pictures To ”Get The Public of Their Asses”- written by @msJennyb ⠀⠀⠀⠀⠀⠀⠀⠀⠀ ⠀⠀⠀⠀⠀⠀⠀⠀⠀ Earlier this month, the controversial relationship between #LilFizz and #AprylJones seemingly came to an end, as both parties scrubbed their Instagram accounts of each other. ⠀⠀⠀⠀⠀⠀⠀⠀⠀ ⠀⠀⠀⠀⠀⠀⠀⠀⠀ While many fans claimed to have seen it coming, chalking the entire ordeal up to a storyline for “Love and Hip Hop,” others weren’t convinced that the relationship, which seemed to be going strong, ended abruptly after the new year. But apparently, according to a source close to the situation, the recent social media move is part of a larger legal battle between Apryl Jones and her ex, #Omarion. ⠀⠀⠀⠀⠀⠀⠀⠀⠀ ⠀⠀⠀⠀⠀⠀⠀⠀⠀ In an interview with Baller Alert, #MonieceSlaughter, mother of Fizz’s son Kameron, opened up about her relationship with the couple, and provided exclusive details about her co-parenting relationship with the two. ⠀⠀⠀⠀⠀⠀⠀⠀⠀ ⠀⠀⠀⠀⠀⠀⠀⠀⠀ “They’re still very much together. Still living together, and she has not lost custody,” Moniece said. “The pictures she’s been posting of her and her daughter with the stripper pole in the background are in Dreux’s house. The video of her sleep on the floor Christmas Day and toasting with her friends was at Dreux’s house as well. Her kids were with their dad this holiday, just like our son was with me. Because they took the kids out of state to her mom’s house for Christmas last year.” ⠀⠀⠀⠀⠀⠀⠀⠀⠀ ⠀⠀⠀⠀⠀⠀⠀⠀⠀ Apparently, the reignited beef between the three started with Fizz’s decision to throw his own birthday party for Kamron, for which Fizz invited Moniece’s estranged absuive biological father. ⠀⠀⠀⠀⠀⠀⠀⠀⠀ ⠀⠀⠀⠀⠀⠀⠀⠀⠀ “He threw a party. It wasn’t at his house. Apryl and her children were in attendance, along with my abusive sociopathic biological father, Michael Slaughter,” Moniece revealed. “I threw Kamron’s birthday party on January 4. Had over 75 guests in attendance. He was invited by Kamron and didn’t show up. It was his plan to separate the ….…to read the rest log on to BallerAlert.com (clickable link on profile)

I know this is the rantings of a bitter ex especially since Fizz continues to do Moniece dirty when it comes to co-parenting their son Kamron. On the one hand I wish she would just leave well enough alone and on the other hand how can we not appreciate all that good tea?

One final gem that the always dependable Moniece left for us is allegedly Omarion and Apryl have been in and out of court.  Omarion does not want Fizz around his children. And now that the secret is out of the bag, the unfollowing and shying away from the public makes more sense. That non-answer she gave on Out Loud with Claudia Jordan makes sense.

Just a little bit of advice to the maybe couple: Watch the bridges that you choose to burn because what’s done in the dark will always come out in the light.

Are Fizz & Apryl hiding their relationship right now?  Is Moniece playing the role of the bitter ex?  Let me know in the comments below.