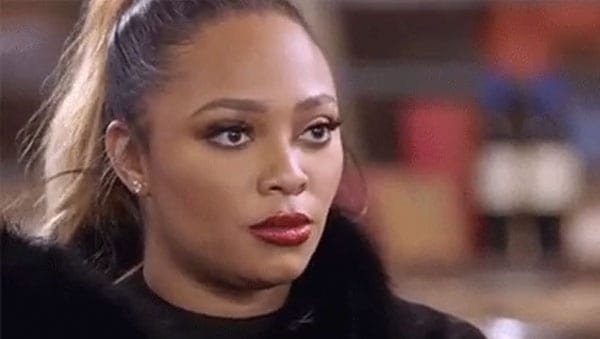 LHHH episode 8 picks up on Lyrica Anderson screaming at Safaree Samuels with Marcus Black, Brooke Valentine, Ray J and A1 at the table. This edit of the scene is slightly different than last week’s episode tho as we see more conversation. Safaree is sounding pretty shady as Lyrica calls him out for the lies she’s hearing. Ray suddenly jumps in and says he wants Safaree to come clean because they’re gonna have a baby and he’s thinking this baby could be Safaree’s. Lyrica’s just shocked and appalled that Ray would even say the baby could be Safaree’s!  That’s when Safaree pumps the break on the conversation and tries to get out of it. When Safaree gets up to go, A1 jumps up and starts running across the table. About six security guards rush in to grab A1 and hold Safaree. “That’s what you get for lyin’ on your d*ck.” -Lyrica

Ray and Safaree step outside and Safaree’s still sidestepping the question. And now mad at Ray for making a bigger mess of things after hearing A1 and Lyrica have a baby on the way. “I just hope the baby doesn’t look like you.” -Ray Brooke goes outside to find Lyrica and instead of asking her if she’s ok, she asks her to come straight about what’s up with Safaree. Lyrica gets p*ssed all over again that she doesn’t believe her. When Lyrica goes in to see A1, she swears she’ll take a lie detector test and although he’s mad, he says he doesn’t need one…

From hacks to hiding… Teairra is avoiding Paris P and Miss Nikki Baby after the video surfaces. She won’t return their calls or anything. And Paris feels bad for maybe having a part in why Akbar might have plot revenge on TT. Paris fills Nikki in on the mess that went down with his investment woman #1 and #2. “It just went all left and it’s weird that after all that happened this sh*t is on social media.” -Paris Nikki’s not sure if TT doesn’t have her part in this tho. Regardless, Nikki’s been where TT is with a sex tape scandal and had her own sex tape business to deal with and isn’t interested in revisiting. She doesn’t want any part of Akbar and his schemes.

Girlfriend #2 happens to be there and starts asking Teairra if she can prove he released the tape. She’s looking kinda guilty too. Teairra claims he’s the only one that had the tape and he has her IG password. He denies denies denies and tries to make it seem like she released it. And then has the balls to say he forgives her for breaking his windows and then asks her if she still loves him. When she says not anymore, his crazy ass responds “this too we shall overcome.” This guy is crazy AF and I hope to God Teairra doesn’t go back to him and that he is off the show. And seriously #2 looks psycho so obviously he’s got a thing for the wild women.

From revenge to rehearsals… Moniece Slaughter fills JayWill AKA Candy in on the TT sex tape. “I think it’s super wack to expose the woman that you say you love.” -Moniece  Turns out Moniece also has had a tape released of her so she can relate on a certain level. Her and TT had a falling out a while back and JayWill encourages her to reach out and be the bigger person because  maybe TT could use the support right now.

From shows of support to shutting down the haters… Lyrica and A1 are now on a united front against their family and their friends. They’re over all the drama and outside interference.

From shutting down to staying in… Teairra is hiding from everyone in bed (why producers have her in full makeup and lingerie during this stressful time leads me to believe this is all for the storyline). Her phone is blowing up and she’s even more angry to hear Akbar is accusing her of doing this as a publicity stunt. So she goes out and hires one of the biggest lawyers in town – Lisa Bloom. Lisa feels like TT has a strong revenge porn case since in California takes it serious as a crime. And of course once they file the lawsuit, there has to be a press conference.

From lawyers to Lucci life… Solo Lucci is still out living his best life rolling up at Brooke and Marcus’ pool party. Brooke can’t wait to spill the tea about Lyrica being pregnant AND the trick Ray J pulled with Safaree.  Marcus is defending A1 in being mad at Ray for bringing Safaree to the dinner, but Solo doesn’t think that’s right. So he suggests all the guys get together to try to clear the mess.

From pool parties to pool tables… Ray turns to RoccStar to hang since his homies are mad at him. Ray fills RoccStar in on the A1 /Lyrica / Safaree drama. RoccStar then tells Ray about the time Lyrica showed up dressed in leather with her boobs out talking about her probs with Aq. Then shows Ray texts that could look like they’re smashing! Ray’s head is spinning. But RoccStar denies they did, but Ray feels like all this mess needs to be cleared up before this baby comes.

From affairs to auditions… JayWill decides he wants to perform at Pride as himself instead of his alter ego Candy. La’Britney is supportive but surprised. Misster Ray is one of the judges and he’s for La’Britney. Unfortunately he’s not here for Jaywill. “There gonna be looking for the wig.” -Misster Ray

From alter egos to appearances… Teairra comes out of hiding, wearing a total scene for an outfit, to meet up with Paris. “This crime is being turned back on me an it’s just not f*cking right!” -Teairra Paris is quick to call her out tho that it seems like she’s still messing with Akbar or might go back to him. TT starts getting real mad and loud and tells her she’s going through with the lawyer. Paris is all smiles hearing this news, but when TT asks her to be there at the press conference, Paris draws the line because she’s still worried TT is gonna go back to this creep.

From conspiracies to card games… Solo gets the guys together to play some cards and clear the air between Ray and A1. A1 comes in p*ssed at Ray and Ray doesn’t understand why A1 doesn’t see how he was tryin’ to help a brother out. “You wanna take your anger out on somebody and I’m not the one.” -Ray

A1 doesn’t want to hear it and starts taking his hat off so Ray stands and takes his jacket off and even takes the time to fold it gently before they possibly come to blows. Security steps in and Ray decides he needs to defend himself more. So he drops RoccStar’s name and tells A1 to look into that. A1’s mad because he’ just trying move forward with Lyrica and Ray just keeps bringing sh*t up.

Who do you think leaked the video? Sound off in the comments!

KUWTK's Khloe Kardashian Wants Daughter, True, To Have A Sibling

“It’s going to be much more next season."

"It breaks my heart."

Find out who Luann de Lesseps said is "so self-absorbed it's crazy."