Tempers continue to flare at the LHHH reunion. 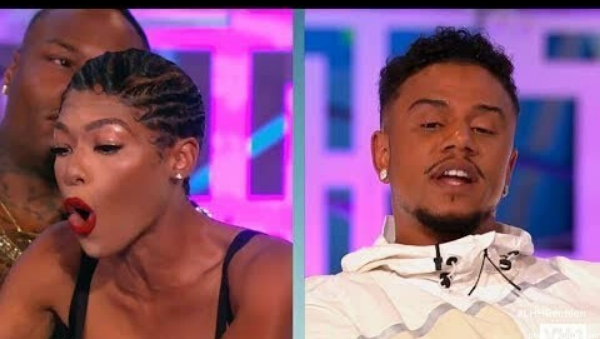 The second half of the Love & Hip Hop Hollywood was equally as intense and juvenile as the first.  My favorite part of the reunions is that we get to see the true colors of each castmate.  It becomes a game of who can defend themselves the best.  Which narrative will win this time around?

The Thirst Is Real.

Interestingly, Brittany B spent most of the reunion in screaming matches.  Finding her way into drama and topics that did not concern her.

This segment was basically a rehashing of the whole Brittany has beef with Lyrica Anderson and Sia storyline. Brittany met the pair before filming started and they had some sort of issue that goes unexplained. Lyrica and Brittany argue.  Sia contributed absolutely nothing this season so she posts up on Brittany and our favorite dollar store security guards earn their check for the day.

After security intervenes, exits the stage and things have calmed down Sia throws a pillow at Brittany which ends up hitting Ray J.

According to Brittany without her Lyrica would be penniless and starving.  This does not sit well with Lyrica and her estranged ex, A1 steps in to defend her honor.

I don't know about y'all but am team neutral. Follow @realitytvboss for more. #lhhh #lhhhreunion

My girl Nina Parker does her hosting duties and unlike security settles everyone down.  And end scene.

Fans were confused by this because this chick has zero storyline.  What do you do, Brittany?  Why are you on the show?  Why should we care?

She couldn’t answer that, so we’ll be moving along.

If we didn’t know that Fizz was the biggest jerk on the planet part two of the reunion cemented that for us.  And while Moniece Slaughter can be messy and arguably not someone I tend to root for, she has battled so much and been an advocate for not only her own mental health but the mental health of others.

Hearing Fizz and Apryl Jones essentially call her crazy and place an asterisk on mental illness was just the final straw for fans.

The second half of the reunion began with the cast continuing to grill Apryl and Fizz on their relationship.  And of course, the narrative continues to be that Moniece is jealous.  She shut that down hard.

“THIS was not my best friend!! Me and you haven’t slept together since I found out I got pregnant!” 👀 Moniece gives Apryl + Fizz a piece of her mind…🤯 What do y’all think about how this all went down? #LHHReunion #LHHH

And when that narrative wasn’t working the topic switched to Moniece’s ongoing struggle with her mental health.

Moniece shared her journey and requested that Fizz support her by being a better co-parent to their son, Cam.  She was vocal about Fizz being emotionally toxic towards her and not stepping up in the way that she needs him to.

And our good buddy Fizz went on to prove to us that he is an all-around not so great guy with the response of “give up custody as a parent since you’re not all there for the responsibility”.  That statement only enraged Moniece and she lunged at him.

“If it’s not your week, it doesn’t mean that you gotta give up full custody because you’re goin’ through something.” Who do y’all agree with on this one…Moniece + Booby or Apryl + Fizz? #LHHH #LHHReunion

And while I’m not saying that Moniece could use a little more support especially with caring for her son; telling a person let alone a Mother to give up her rights when she is asking for help just tells you all you need to know about a person.

Once things settled down Fizz stated that he would give custody back to Moniece if she were able to “prove that she is mentally capable of being a Mother”.

The majority of the cast was Team Moniece and with a child involved everyone hopes that the two will be able to work out a system that works best for all of them.

Don’t Come for Me.

Part two of the reunion was about Fizz and Apryl and the cast calling them out.  Like the fans of the show their fellow cast members smelled something fishy not only about the timeline of the relationship but the validity of it as well.

These two have been the poster couple for attention seeking the last few months and everyone is over it. Jason Lee came for Apryl and I enjoyed every moment of it.

The ladies and especially mothers of the group clapped back at Apryl for her judgment of their parenting skills.  Who are you to shade someone when you are all over social media talking about your sexual conquests?

I laugh so hard when celebrities claim their children will never see their shenanigans.  What decade are you living in because clearly, it’s not this one.

Moniece maintains that while she is unbothered by the couple’s relationship her issue with them is the constant lies.  She would rather for them be honest about when their hookup occurred since there have been photos of them hugged up for nearly two years.

“It just sounds weird that they saw that, and now it’s this…” 👀 do y’all think Apryl + Fizz have their story straight? #LHHH #LHHReunion

Of course, to divert attention off herself, Apryl goes in on Moniece and lashes out about her allegedly lying about Apryl being pregnant. Moniece says an acquaintance of Fizz told her Apryl was pregnant.

We find our way back to Jason Lee’s as well as much of the casts dislike for Apryl when the topic of Zell Swagg selling photos of Apryl and Fizz in bed to Jason.  Just like we all knew, Zell did it for the money and Jason released them because he has a business to run and could careless about Apryl.

“Nobody on this stage but Fizz thinks about you.” 🤯🙊 Jason Lee gets into it with Apryl + Fizz, but who do y’all think is in the wrong? Don’t miss PART TWO of the #LHHReunion TONIGHT at 10/9c on @vh1! #LHHH

Some of the cast is mature enough to know that selling stories and caring this much about a relationship that is not your own is wrong and unnecessary.  However, the remainder of the cast is over the dynamic duo and just as grateful as the rest of us that with the end of filming they can live in an Apryl and Fizz free zone.

And here is where I bid you adieu.  We can only hope that everyone gets their acts together for season seven.  Then again, why would we want that?  See you next season, my friends.

What are your thoughts on part two of the reunion?  Will you tune in for season seven?  Let me know in the comments below.