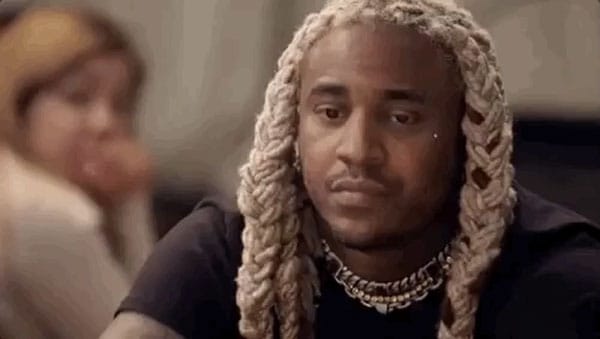 In the LHHH season 5 episode 7 opener, the fight continues between team Lyrica (Lyrica Anderson and her mom, Lyrica G) vs. A1’s family. Security sweeps the Lyrica’s out while A1 shames his family for the food fight that took place and the mess they left.  A1’s family doesn’t even know why the Lyrica’s were there since they thought A1 and Lyrica were on their way to divorce court. “You know why I involved them? Cause you have another grandkid on the way.” -A1 A1’s family gets more mad and start asking if he is sure the baby is even his! A1 leaves his crazy fam to go talk to the Lyrica’s in the car and that’s when baby Lyrica tells momma Lyrica that she’s having a baby… oh lawdy. Momma Lyrica is p*ssed and jumps out of the car in traffic and has a total meltdown in the street!

From one crazy mother to another… Shun Love is overseeing her daughter Amber Diamond‘s photo shoot for her album cover. “Wait a minute. It’s looking like your fat is poking out right there. Let’s fix that.” -Momager Shun tries to school her daughter and when Amber pushes back, Momager’s not having it.

From Momagers to mistresses…Miss Nikki Baby and Paris P finally have enough receipts to show Teairra that Akbar is a cheater. TT thinks Paris is still digging up dirt from the blogs. “There’s something in my gut, and I have a really big gut, I felt like he really was married.” -Paris They tell her all about meeting with the wife and finding about the other girlfriend – and how they all seem to know about Teairra! “I’m broken hearted by the whole situation.” -Teairra

From real cheaters to alleged cheaters… A1 and Lyrica are putting the Lyrica / Safaree cheating rumor past behind them and focusing on their future family. As they stroll hand-in-hand down the street, they recap how the baby announcement was a total bust with their families. Since their families aren’t happy they think maybe their friends will be. So they’re gonna attempt a second baby announcement meal…

From announcements to ammunition… K. Michelle is still recovering from her butt implant removal surgery and accepting visitors. And who should stop by today? Her old friend Safaree Samuels. Safaree is kinda mad at K. for using the information he entrusted in her about hooking up with Lyrica. K. tries to defend herself that Lyrica came for her she couldn’t help it. “Wasn’t there any other ammunition you could have used?” -Safaree “Well I had shot it all!” -K. She apologizes and Safaree is quick to accept so long as K. keeps her mouth closed about the new information he tells her. Yeah right!

From forgiveness til death do you part… Brooke Valentine surprises / dupes Marcus Black into a shotgun hotel room wedding. Marcus thinks he’s coming to the hotel for a romantic getaway and when he walks in, there’s Brooke in a black dress (interesting choice) with a preacher and Bridget Kelly standing by. And as Marcus is about to bolt… in walks his mom and Brooke’s mom. “Brooke this is not what I had in mind.” -Marcus It turns out what Marcus had in mind was a proposal! “Today, I don’t want to celebrate our marriage. Today I want to celebrate our engagement.” -Marcus

From bedroom proposals to bedrest… Ray J‘s trying to treat Princess Love like a princess while she’s on bedrest. But Princess needs to a break from the bed and what she wants from Ray J is to go to dinner with A1 and Lyrica. Ray’s been avoiding A1 since finding out about Safaree and Lyrica hooking up. “I’m having contractions.” -Ray

From avoiding to confronting… Teairra Mari brings Paris P along for date night with Akbar in order to confront him on the wife and girlfriend. Akbar just smiles, invites them in and in his own weird way comes clean. “I invest in women.” -Akbar

Srsly where do producers find these guys?! He claims he’s invested in making Teairra better just like the other women. The women who also happen to be there! Paris and TT are shocked. And then wifey Sade starts running her mouth, claiming she’s number one and anyone who is gonna deal with Akbar best believe they fall in pecking order. Well this doesn’t sit well with girlfriend (aka #2) and suddenly their having words. Security starts creeping in… Akbar tries to put Sade in her place.

Meanwhile TT can’t help but laugh and Paris can’t help but jump on the opportunity to antagonize #2. Things get tense and as they try to put TT in her place. She wants no part in it. Sade says on the DL “this is why you don’t pick without me.” Huh?!  What is this an Akbar cult? “This is what I said I’m not gonna do so I’m out.” -Teairra As she’s walking out the door, Sade and #2 go for her and Paris steps up to #2.

Security isn’t quick enough for Paris and she gets a good hold on #2’s hair as they try to break them up she’s pulling that weave hunni! Akbar’s just standing there not doing a damn thing. Unlike other fights on the show, this is legit chaos that the producers and security can’t control as Sade’s continuing to gun for TT and #2 makes another run for Paris. TT and Paris make it to the car fairly unscathed but #2 gotta be missing some hair!

From confrontation back to avoiding… Ray hasn’t been able to face A1 after hearing from Safaree that he hooked up with Lyrica.He feels like he’s in the middle of this mess (even though he put himself there).  He tells Safaree about how he’s asked Princess to avoid Lyrica too, but now they want to have dinner and Ray’s scared to face them knowing what he knows! Safaree feels bad. “We the three amigos.” -Safaree “I know we the three amigos, but one of the amigos ride on somebody else’s horse.” Ray suggests Safaree show up to the dinner and apologize for it to get ahead of this mess. Safaree agrees.

From forced apologies to forced fun… RoccStar has finally finished mastering Amber Diamond’s track. But he’s not confident that even he could pull off turning “tragic into magic”. So he’s text everybody to come and has even hired people to show up all for the purpose of “bobbing”. He needs to make sure Amber’s Momager sees the people moving to the music so she’ll pay her $20K balance due. The song comes on and everyone’s dancing as directed, even Amber gets into it. Everyone’s bobbing but momma. The autotune was so heavy she’s mad she can’t recognize Amber’s voice. Momma goes up and grabs the mic “For $20,000 that sh*t is bullsh*t.” -Shun The mic battle is on now! RoccStar insists they play Amber’s raw vocals which are just awful. This is totally embarrassing for Amber who goes and turns it off.

From dancing to date night… Ray J finally has to look A1 and Lyrica in the eye after learning the news that Safaree and Lyrica hooked up. Ray’s plan to clear all this mess up is for Safaree to show up and apologize but he doesn’t share this plan with Princess until they get there. She’s p*ssed knowing what a terrible idea this is.  “I’ll pay the bill.” -Ray The evening with the couples starts off with Brooke and Marcus’ engagement news! Everyone toasts to the happy couple! Yay! So Lyrica feels like it’s her and A1’s turn to share their good news! First off.. they’re back together! Secondly… they’re having a baby!

The women are so thrilled (especially pregnant Princess) but the look of utter shock on Marcus and Ray’s face is priceless! Ray couldn’t contain the question in his mind, who’s baby is this?! A1 or Safaree?! Princess then realizes that Ray’s about to pop their bubble by having Safaree roll up to this dinner party. So she pulls Lyrica aside to the ladies room. And while the women are away who should walk in? Safaree? A1 is not happy but Brooke is here for this tea. When Safaree is too afraid to come out with it, Ray feels the need to tell the table that Safaree told him he has sex with Lyrica. Brooke gets up and runs to the ladies run. Safaree is too quiet. A1 is too quiet. “This has become quite the uncomfortable space.”-Marcus You got that right Marcus! They are really building the tension up for this scene!

Before anyone can say anything, Lyrica comes out from the bathroom and just starts yelling “WHAT THE F&*K IS GOING ON?”The other diners are all startled and wondering the same thing! She’s coming at Safaree with rage after hearing he told Ray J they slept together. When Safaree finally speaks he says “I didn’t say that.” WTF! Although looking back it’s true he never said it. Safaree gets up to leave and just basically leaves it all at the table saying he doesn’t know what’s going on with them but he wants out of it. A1 lunges out of his seat and is on the table so fast it was a like straight out of an action movie leaving us with quite the cliff hanger!

What do you think about Safaree’s showing up to the dinner? Sound off in the comments!

Be the first to leave Comments for Love & Hip Hop Hollywood Recap: Shaking the Table