Home > Buzz LHHATL Reunion Part One: Do Your Worst

LHHATL Reunion Part One: Do Your Worst

Takes a lot to break me 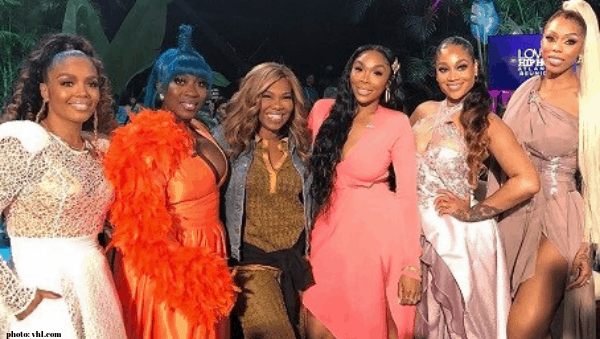 The time has finally come.  My entire being waits for the reunions and part one did not disappoint.

Get excited because you’re in for quite a ride.

In part one of the Love & Hip Hop Atlanta reunion the cast finally came together with no holds barred.

You Gets No Love

Let’s begin with Stevie J and only because he’s married to a legend.  He had zero storyline absent his usual nonsense, but the dude is married to Faith Evans, so I’ll give him top billing.

Faith is an absolute gem and while Mimi Faust wants to run her barely there baby father over with her car, she is vocal in her praise for Faith.

If you recall Stevie J spilled the beans of his marriage to his daughter without even informing Mimi that he was married.  Faith found out on camera and even she looked at the man with complete and utter disgust.

Girl, you couldn’t have been surprised.  You married Stevie J.  The king of no one matters but me.

Stevie apologized again, but honestly Mimi is over it.  She knows his apology means nothing and hopefully when they divorce, she’ll be first to know.

Out of left field, the reunion host, Nina Parker asked Stevie if he still carried a torch for Mimi because he legit tries to ruin every single one of her relationships.

And do you know that I never even thought about this?  It makes sense to the novice viewer, but we all know that Stevie cares about only himself.  He only wants Mimi to be alone so she can pine for him.

Ty Young thinks the idea has merit. In all honesty, Stevie is upset that Ty is a better parent to his child than he is.  She plays basketball not only across the country but at times in another country and still makes time for Eva. Eva has been very direct about the fact that she knows her Dad is a fun dude that hangs out with her sometimes.

The “poorly worded” back-handed apology that Stevie haphazardly awarded to Ty was resurrected and basically what we learned is that storyline will never end.

In the game of love, Kendra comes out on top.  For some reason this highly educated, beautiful woman wants to spend the rest of her life with Yung Joc.  Or you know long enough for her to get a few good seasons under her belt.

A reel of his sleaziest moments from the season was played and the audience and Kendra caught a glimpse of Joc’s continued poor decisions.

When an audience member posed the question of whether or not Joc & Karlie Redd had ht it and quit it sometime during the season both were adamant that the former couple have definitely gone their separate ways.

Kendra was in her feelings.  The audience rolled their eyes.  And the viewers at home are just over it.

You play, you pay

For some reason three grown adults have still not learned how to co-exist and co-parent.  Scrappy and Erica Dixon still hate each other.  Scrappy spends much of his time talking trash about the Mother of his daughter.  Then his wife, Bambi Benson is forever finding herself in grown-folks business.

I don’t have children nor do I have all of that ex drama, but for the love of lord Bambi mind your business.  You have a son now and I’m wondering how you would feel if another woman was constantly trash talking you in front of your child and making decisions about your child.

Food for thought my dear.

The reunion host did address that the three rarely if they actually ever did film together this past season. Emani’s hot mess of a birthday party was discussed and seriously that poor little girl.

Bambi claims that Erica is jealous of her place in Scrappy’s life especially now that she has his son.

Scrappy evidently has yet to learn his lesson in choosing his battles wisely. He co-signed Bambi’s words and basically said that Erica is petty.  So what was Erica to do but come for him and come for him hard.

Erica told the world that Scrappy is a deadbeat Daddy who has failed to pay his child support for the last three months. Not only is he failing to cough up money she holds Bambi responsible for their lack of relationship and co-parenting skills.

Girl, I was riding with you until that quote.  Don’t blame Bambi.  Yes, she’s a complete nuisance at times and I can see how you just don’t want to deal with her.  The real issue lies with Scrappy.  He must do better and want to be better for Emani, who is his child.

But mostly, they need to all stop acting like toddlers and learn how to set their differences aside so that they can prioritize Emani.

Thank you Rasheeda for being the voice of reason, as per usual.

Sierra Gates has been spending far too much time with Karlie who is clearly rubbing off on her.  And I can’t say that I’m all that bothered by it.

Karlie may be a bit too messy for me, but Pooh is the literal worst.  I just cannot take one more episode let alone season of that woman.  Mona, let us live.

Sierra found out some information on Pooh and in the last episode of the season she was undecided whether she would play the role of the bone collector.

Evidently, she had some time to think about it and gave us the mediocre juicy scoop.

Pooh Hicks and her husband Hiram Hicks are not legally married.  The reunion host confirmed that the show did their own research and backed up Sierra’s claims.

Pooh seemed unbothered and claims that she doesn’t need to dignify her marital status to a bunch of strangers. And while she is right, she cannot try and call everyone else out and then hide her own little secrets.

More importantly I don’t care, and I think the audience was as interested in that bland tea as I was.

The Lie Detector May Reveal All

The entire season has been a back and forth of Karlie against Pooh and who has a more plausible story.  Must we continue with this madness when we all know that there is some truth and a few more lies.  Mainly, no one cares!

Karlie underwent a lie detector test which refuted Pooh’s claims, but this did not satisfy the reunion audience and viewers because we all know how credible those are.

To put all the nonsense to rest, the LHH franchise administered their own lie detector test.  Karlie was down, however Pooh just cannot trust the show and wanted to bring in an unbiased third party.

Girl, what show have you been watching and infecting with your craziness this season?  They love calling Karlie out on her nonsense so if what you said happened then they’ll reveal it.

The new test results are of course being held over until part two of the reunion for dramatic effect.

How much you want to bet they’ll be inconclusive?

Tune in next week for a little more drama and just overall nonsense.   Good times ahead my friends.

Who do you believe, Karlie or Pooh?  Would you be able to co-parent with your ex and their new spouse? Let me know in the comments below.

Be the first to leave Comments for LHHATL Reunion Part One: Do Your Worst