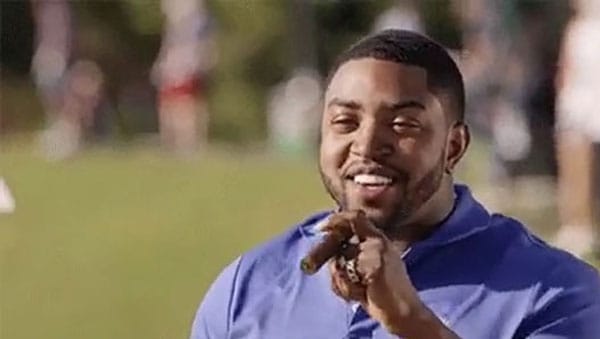 Love & Hip Hop Atlanta Season 7 is 6 episodes underway and who should return? Lil Scrappy! He surprises Momma Dee with his return from filming LHHMIA and as happy as she is to see her son, she was hoping it was Nurse Bae at the door. As we all were. While it’s happy reunion, Scrappy’s sad to hear about his momma’s marital troubles, and grateful things are so good at at home with his own marriage to Bambi. He drops the news that they’re pregnant! They’re trying to keep low key tho incase she has complications. “I’m so happy to be another glam grandmother.” -Momma Dee

From pregnancy news to producing, Tokyo‘s in the studio with Tabius working on a new music for her release party. She’s also invited Bleu Davinci (Keely’s baby daddy) to drop by the studio so she can invite him to her petty party where he’ll be in the room with her new nemesis Keely. To really stir the pot, Tokyo drops the news to Bleu that Keely’s now with K.Botchey who Bleu is cool with but had no idea they are hooking up. Bleu wants to see his kid and Keely’s been boxing him out so he’s in ATL to try to get some time with his son.

From Bleu to seeing red, K. Botchey is p*ssed Keely Hill never told him his buddy Bleu is her baby daddy. So he goes to her office to confront her. “Just to be clear, Botchey never asked me who my son’s father is.” -Keely. She’s got a point. She didn’t lie. He just never asked. So why he so mad? He can’t even answer because she just starts going off. Botchey breaks it off with her and tells her not to come to Tokyo’s event. Dumped and uninvited.

From break ups to bromance, buddies Joc and Stevie J welcome Scrappy back to ATL at the driving range. Scrappy brings cigars to celebrate being back in the A and shares the news he’s got a baby on the way. “With your wife right?” -Joc On this show it’s best to clarify who the baby momma is…

It’s good news tho. And Joc’s got some good news too. He’s opening a hair salon. The guys are surprised and probably a lil disappointed it’s not a strip club but hey, it’s cool. “We know damn well the only reason he opened a damn hair salon is so he can get some booty.” -Scrappy With all the changes with Scrappy and Joc, some things never change. Stevie’s smashing his latest artist Estelita. “I expect no less from you.” -Joc

From golf outings to guilt trips, Jessica Dime‘s been alone planning her wedding to Shawne and now pregnant and home solo. Shawne feels bad about it so he organizes a surprise visitor for her… her mom. They’ve been estranged and Shawne want her to make up with her so she can get some help with the baby. Dime just thinks her mom Diane adds more stress to the situation. So when mom shows up, she tries to clear the air. They have a good heart-to-heart so Jessica shares the news that she’s pregnant.

From one reunion to another, Tokyo hosts her album release party and it brings the group out with a special splash of petty. Karlie Redd, Sean Garrett, Joc, K.Botchey and Tabius are chilling VIP style. In rolls Bleu as disappointed as Tokyo is that Botchey uninvited Keely, Botchey is relieved.  Bleu and Botchey have a grown man conversation and they’re good so the awkwardness is clear. And surprise who should walk in uninvited?  Keely. She walks straight up to the VIP area and sets her sights on her baby daddy Bleu. These two side bar start yelling about Bleu not seeing his son. Keely comes back and starts in on Karlie. Bringing back up the rumors of Karlie and Tabius messing around. Karlie pops off and when Joc tries to settle her down, she goes off on him too.

To add fuel to the fire, Sierra Gates walks in with her friend who happens to be K.Botchey’s girlfriend. Krazy Keely just starts clapping. Knowing she’s getting set up in these games and she came to play. Turns out the girl Keely brought is Sierra’s estranged husband Shooter’s girlfriend. Sierra acts all cool then cocks back the purse and gets a full swing in clocking Keely in the head before security can break them up! The dog pile gets messy and Joc ends up a girl in his lap while security tries to untangle the hair pulling mess!

From breaking up fights to billiards, the guys meet to talk about WTF happened at Tokyo’s party. Joc and Botchey fill the guys in on Sierra going off! “Sierra 1 – Keely 0” -Botchey

From scores to sit downs, Sierra apologies to Tokyo for losing her sh*t at Tokyo’s party. They understand because after all they were scheming for a fight. “The b*tch had it coming.” -Karlie

The conversations go back and forth as we get to the bottom if who Crystal is. Botchey confesses to the guys that yeah that’s kinda his girlfriend and maybe her rolling up with Sierra was like an bomb going off. Sierra is all proud of the fact she got to put Keely in her place by introducing Crystal. Karlie of course needs the tea on how Crystal fits into this picture and she claims they’ve had an on/off relationship.

From new people to old castmates, Bambi is back and about to have a sit down with Momma Dee. Before she goes in, Scrappy confesses he told Joc, Stevie J and his momma about the baby. Momma Dee surprises Bambi with friend Rasheeda Frost and Tammy Rivera joining the dinner. Bambi’s kept a low profile since eloping and getting pregnant. That’s not the only surprise Momma Dee has in store. She brought gifts for the baby! So it forces Bambi comes clean she’s pregnant. They’re all happy about it and agree to keep her secret. Bambi being back is alright, but we should really talk Rasheeda serving serious looks in these scene! She needs more of this kinda screen time!

From mommas to messes, Sean strolls into Karlie’s store Merci Boutique to tell her he’s not into the drama that she brings. And how unhappy he is about his ass ending up on the floor when the women started brawling. “How old are you? You’re a grown ass woman and you gotta start acting like it.” -Sean She agrees she’s gotta do better and show him she’s wifey material.

From wifey to WTF, Tokyo hears her man Tabius might be hoeing around on her while she’s out of town. She saw a pic of him having tacos with some chick. Tabius claims he was out with his ex because her grandaddy just died so he was trying to show support as a friend.

“Because you’re a virgin you’re insecure about it.” -Tabius She tries to put hands on him but security breaks her up.  Tokyo’s going off with some funny slams on Tabius ex being a flight attendant.  “Go fly high with your Spirit hoe.” -Tokyo Even Tabius has to laugh as she walks away. “Like how you gonna leave first class for standby.” -Tokyo

Do you think Tokyo should be so suspicious of Tabius? Sound off in the comment!

“I did not get kicked out for doing p*rn.”