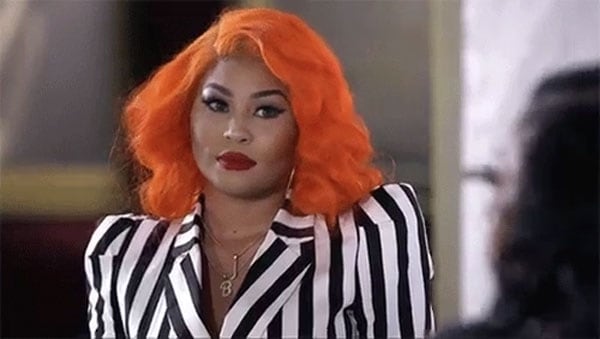 Love & Hip Hop Atlanta season 7 episode 7 actually opens with a little lovey dovey moment between Sierra Gates and BK Brasco. Strolling the streets hand-in-hand. Taking a horse drawn carriage. Then Sierra decides to take the romantic moment and ruin it by talking about her estranged hubby, Shooter. “I know this is probably the wrong time to have this conversation with you. But you know you’re my best friend I tell you everything.” -Sierra Um yeah… this is probably one of those times to shut your mouth and not friend zone your man on a romantic date.

From friend zone to flower delivery, Karen King drops by Momma Dee‘s house to check on her after surgery. KK didn’t just bring flowers to make her feel better, she brought Nurse Bae. “Yasss KK. Looking at Nurse Bae makes me want to put my new body to use.” -Momma Dee

When KK asks why Ernest hasn’t been around to help her out while she recovers, it’s time for Momma Dee to come clean about her husband. Turns out Ernest went missing and was found in a hotel room using crack again. He’s succumb to his demons and she has no idea what to do or how to save their marriage…

From convos with KK to cooking in the kitchen, things have gone from business to pleasure between Estelita Quintero and Stevie J. Estelita knows she’s gonna get sh*t for hooking up with Stevie but she doesn’t care. Stevie is now her MAN-ager so he’s in his Danger Zone messing around with yet another one of his fiery Latina artists. Kinda wishing Joseline was back on the show right now.

From papi to promoters, Tokyo sets up a meeting with K. Botchey to plan her album release party at his club. Sierra and Karlie Redd are along for the ride. Before they can talk about the event, Tokyo needs to know if Botchey can put a muzzle on his girlfriend Keely.  He keeps it professional and they appreciate how he handles his business despite his choice of women. But that doesn’t mean Sierra hasn’t done her research to come for Keely. She found out Botchey has another girlfriend! The tea is so hot, Karlie can’t contain herself!

From tea to Tiarra Becca, Just Brittany hits up her friend from the strip club days. Just Brittany is staying sober and is on a cleanse to keep her mind right for when the drunk b*tches come for her. The ego on this chick. She fills Tiarra in on the drama with working Stevie J. “If you don’t give up the coochie, it’s the contract” -Tiarra Just Brittany claims she’s not about opening her legs for the contract. That’s what they all say…

From coochie contracts to clearing up confusion, Rasheeda Frost literally tapes up the house to mark the areas Kirk Frost is allowed to go in the house. So it’s clear there are literal and figurative boundaries. Um isn’t it more confusing you let him move back in?  It’s a petty move making him stay on certain literal sides. Kirk is just happy to be back in but he still questions the tactics. “This sh*t looks crazy to me.” -Kirk

From pouty artists to pregnant women, Shawne Williams brings breakfast in bed for fiance Jessica Dime to break the news he got a job with the Iowa Wolves.  So now he won’t be around for 4 months so she’s gonna be pregnant and alone. Shawne tells her she needs to get back in touch with her momma. “Yeah but that b*tch is crazy.” -Jessica

From breakfast in bed to bro time, the guys all get together to show their support for Joc‘s new salon with business partner Sharonda. The guys all give them a hard time because it doesn’t look like the place is going to be ready to open in the two week timeline. “I wouldn’t have brought the fellas out if I knew it wasn’t ready.” -Joc

Joc tells the fellas to invite their ladies to the grand opening party and that opens up some issues. BK will want to bring Sierra, but she’s got beef with Botchey’s girl, Keely. Botchey doesn’t even want to bring Keely anyways because she always brings the drama. Then somehow it comes out that Botchey doesn’t know who Keely’s baby daddy is. So Joc breaks the news it’s Blue Davinci. We don’t exactly know what this means, but they are really building the Blue storyline up…

From Keely’s baby daddy to Keely’s beef with Just Brittany, the two former friends meet up. Just Brittany wants to understand what Keely’s problem is with her and why she switched sides. “You have a temper problem.” -Keely Just Brittany goes off and Keely couldn’t get a word in edgewise. And when Just Brittany is done running her mouth she gets up to leave. So Keely hurls her drink and the security guy tries to block the water and swoop in to pull these women apart. Both these women clearly have temper problems!

Why do you think the security guard tried to block the water? Sound off in the comments below?!

Be the first to leave Comments for Love & Hip Hop Atlanta Recap: Showing Out

Jen's charges were upgraded to 'Tier A' status as she is a "suspect with greater culpability."