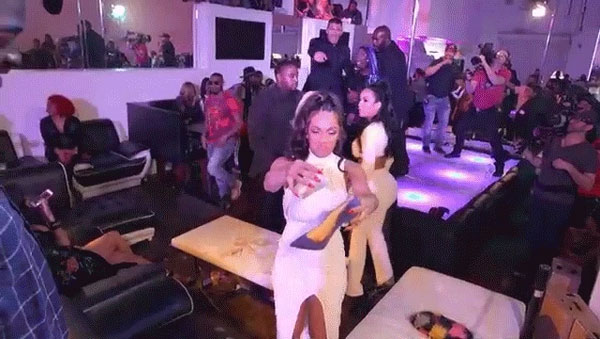 The LHHATL cast is all back from Houston and ready to get back to their ATL ways. Estelita Quintero is filming a music video with Spice there for support and Stevie J actually doing his job as Estelita’s manager. Stevie’s supposed to be organizing this showcase and with Just Brittany out, he needs to still find more talent. Spice thinks Stevie’s lucky Just Brittany’s not performing because her singing in Houston was laughable. And another laughable moment is when Sierra’s ex Shooter strolls in so Spice feels the need to share how disrespectful Sierra’s new man BK was to them in Houston. Shooter’s got more important things to worry about. And so do we quite frankly as this scene was just silly.

From silly drama to slaying the stage… Tokyo‘s focused on rockin the mic and keeping it cute for the fans but she’s irritated to see her ex Tabius doing the most and Keely Hill standing next to him.

Tabius is trying to win Tokyo back. And Keely Hill apparently wants to make up with Tokyo too. Tokyo refuses to talk to Keely and then gets mad at Tabius for inviting her. She’s in no mood to hear her or him out. “Tabius Bye.”

From pushing out to rolling up… Kirk Frost meets up with his daughter Kelsey Frost in a random location. Turns out it is a little bit of an ambush to let him know she met the baby brother he’s been hiding from everyone. She’s trying to convince him to go see the kid. “If you are going to be in his life don’t half ass it.” -Kelsey Oh turns out there’s no time like the present. Baby momma Jasmine Washington and Kannon are there and there’s no chance for him to worm out of it. The baby is so adorable it’s worth having to watch Kirk.

From Daddy duties to divorces… Sierra Gates and Shooter meet at the lawyer’s office to seal the deal. “Today is THE day.” -Sierra The lawyer leaves them with the paperwork and they agree they’re not compatible they’re still family with their kids. They sign amicably and now they’ll be officially divorced in 10 days.

From divorces back to Daddy duties… Kirk waits to tell Rasheeda Frost in person that he saw Kannon. But she already knows because she saw Kelsey posting on Instagram.

She’s already irritated he didn’t call her immediately and she’s still not hearing things from him first. All the more reason to leave him! But does she get that mad? No not really. And we are forced to watch this mess.  Kirk wants her and the kids to meet Kannon. She’s good with the kids meeting him but she’s gonna hold off a hot second.

From secret meet ups to organized talks… Tokyo asks Sierra to tag along as she speaks to a group of troubled young women. In the longest car ride ever, these two talk about their own troubles first and Sierra tries to convince Tokyo to give Tabius another chance.

From car rides to studio sessions… Stevie J rolls up on Sean Garrett while he’s working with BK Brasco. Sean asked Stevie to come by to make sure it’s cool if he works with Erica Mena. Stevie wishes him luck since she brings the drama. Stevie could care lessa bout Mena because he’s more focused on BK at the moment and wanting to get to the bottom of him calling Estelita a b*tch. “I’m not gonna respect you calling my chick a b*tch.” – Stevie BK owns it that he shouldn’t have and Stevie’s good with it. So yeah.

From egos to empowering speeches… Tokyo shares her story at the community center. And who should walk in as she’s up there talkin’? Tabius. It throws Tokyo off but she’s kinda happy he’s there. Turns out Sierra told him to come and Tokyo’s alright with her being #teamtabius. After she unloads on him, he calms her down and even gets her to agree to go out with him…

From apologies to autotune… Estelita is FINALLY performing this Danger Zone showcase that’s been built up all season long. It’s hard to tell what her voice really sounds like because it seems like she’ lip syncing over an insanely autotuned track but whatever. Erica Mena is here for it and all about supporting her friend.

Stevie is stoked to have everyone there… Mimi Faust, Spice, Keely, Sean, BK, Melissa Scott, Karlie Redd… well not quite everyone… Erica Mena he could do without. She’s been mad since hearing from Sean Stevie’s saying she can’t sing. (Surprisingly the producers didn’t get shady and cut to her terrible singing fiasco in LHHNY.) Everyone’s all chatting in the VIP area, congratulating Estelita when there’s all this commotion happening behind them.  Stevie’s daughter, Savannah, and Erica are getting held apart by security and Erica just keeps talking sh*t. The irony of Erica getting mad when Just Brittany talked trash about Erica’s son and now Erica talking trash to and about Stevie’s daughter doesn’t get past Mimi. Stevie sits back down and confronts Erica who just starts running her mouth.

Even Estelita tries to calm Mena down and Stevie just keeps repeating “watch your mouth.” As if that works!   But Stevie lucks out when Erica’s attention gets pulled away when her nemesis Just Brittany walks in. It just gets all the women screaming at her.. Keely, Spice, Estelita and Erica! They have to get Brittany outta the building with full security. And petty Mena tries to get the last laugh by pouring drinks in what she thinks are Brittany’s big shoes only to find out they were Spice’s!

From Mena messes to messy crossovers… Stevie calls in the ultimate Mena handler from NY… Rich Dollaz! And now we have to wait til next week so see out Stevie’s scheme plays out!

Were you surprised to see Rich?! Sound off in the comments!

Be the first to leave Comments for Love & Hip Hip Atlanta Recap: Showing Off

"He came up to me and introduced himself to me and gave me his number."