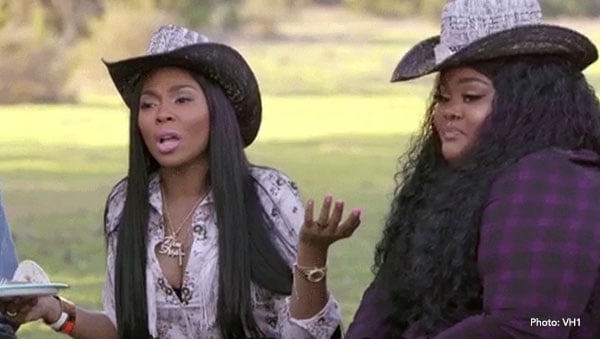 Love & Hip Hop Atlanta is taking a page out of the Housewives playbook and taking the cast on a trip! Where to this year? A dude ranch in Texas. Not as sexy as the Jamaica trip last year but hey! Any chance to get the cast together to stir up some bullsh*t, we’re here for it!

Speaking of stirring up sh*t… Jasmine Washington, Tiarra Becca and Just Brittany meet for champs to fill in Just Brittany on Jasmine’s confrontation with Rasheeda. Just Brittany is here for some serious tea, but not much really came of it other than Rasheeda called Jasmine “malicious”. When it turns out this story is boring, Just Brittany asks if they’re ready to hit her hometown sites and they both pass. Good. They can go home.

From boring scenes to bus rides… the rest of the cast takes a ride out to the dude ranch. It’s a long four hour ride and it gets even longer when one of the buses has a blow out. So while hanging out in the middle of nowhere, they made the best of it in the parking lot.

Eight hours later, they finally arrive at Silver Spur Ranch. They’re off the grid and all trapped together in basic conditions. But it’s a good excuse to sport their cowboy wear and Joc takes his outfit to another level with the matching red boots and shirt!

The city folk go on a hay ride to check out the ranch and are welcomed for chow time by Pistol Packin’ Paula! Not exactly the kind of gunslinging they’re used too..

Chow time turns into a chew out as Tokyo and Spice start going at it again. Spice brings Karlie Redd into the mess by ratting out some of the things she said before Spice even met Tokyo. Spice calls out Sierra for playing both sides. All the while Tokyo just keeps running her mouth. Damn sis did you even take a breath! Rasheeda Frost tries to put an end to it but there’s no shutting Tokyo up. Joc just goes and gets another burrito. Mimi Faust keeps eating her food. The rest of the group is just watching and waiting.

Tokyo finally says something to piss Spice off so bad she throws her plate at her. Security rushes in to break the two apart and it takes four guys to hold Tokyo back. She’s like a raging bull that sees red. BK Brasco tries to calm Tokyo down and while security is dealing with this mess, Estelita Quintero makes a go at Sierra Gates.

Estelita thinks Sierra’s a hypocrite by playing both sides in this fight. Rasheeda calls security over to hold these two apart before contact is even made. As they pull Estelita to Spice’s car, Estelita keeps talking sh*t to Sierra so her cheating ex BK steps up to defend and that just gets Estelita more riled up. “You wanna fight a b*tch?” -Estelita

As the van is pulling away with Spice and Estelita, Spice jumps out and tries to come for Tokyo again! This time she’s running and has to hold her boobs in her shirt so she’s slowed down a second. That slow down gives security the advantage and they’re able to snag her and round up Estelita again before anything else happens.

The ranch dudes are just watching this mess like WTF.  Meanwhile we’re all Erica Mena over here sipping that tea hunni.

Suddenly Sierra starts putting pieces together realizing Spice said Karlie was feeding her info and comes for Karlie. Karlie pops off and plays the sick dad card as a reason for her stress. Not really sure what her sick dad has to do with causing problems with Tokyo and getting up in Sierra and BK’s business but ok sis.

Karlie’s off walking by her lonesome after the blow up and Joc catches up with her. Joc and Karlie have a real talk and Joc asks about her dad. And as she’s all emotional and teary talking about her sick dad, Joc can’t help but fart. “My bad.” -Joc And the crass humor is much appreciated because it stops us from having to watch more of Karlie’s sob story!

Meddling Melissa Scott goes to talk to Tokyo about the fight. Tokyo’s issue is really with Karlie. Melissa gets that Karlie is messy but not meaning for people to get violent so she tries to press Tokyo on what made her snap off and throw her purse at Spice. Tokyo claims she’s trying to be mature and not go there, but she can’t help it. Especially when Spice came hard with the fat jokes, she just lost it.

As always, meddling Melissa wants to help broker peace and Tokyo agrees to sit down with Spice so long as she tones it down. Thank gawd it’s not Melissa mediating this sit down. Instead, Rasheeda’s in charge of the healing process . “I want you to have a grown woman conversation.” -Rasheeda Rasheeda ends up leaving so they can talk. They talk it out from separate tables and agree to just call a truce to enjoy the rest of the trip.

Now it’s time to smore it up as a big group around the campfire. Rasheeda says Tokyo and Spice squashed their beef so now it’s time to work through the Estelita and Sierra issue.  Estelita starts running her mouth and the situation gets tense again. And just as it’s looking like someone is gonna get burned… the show ends! Guess we gotta see what happens next week…

Do you think the beef between Tokyo and Spice is really squashed? Was Karlie to blame for all of it? Sound off in the comments!

Jen "made it rain on dancers and downed glasses of Don Julio and Veuve Clicquot champagne."

"He was saying one thing...and then doing a completely opposite thing."

"There [are] notes my friend gave me, and then she's reading my personal journal."

Eboni "spent the night unbothered by her castmates’ dramatic departures... she had a ball at the party."

It's not just us... Austen was shocked to find himself in a love triangle as well.