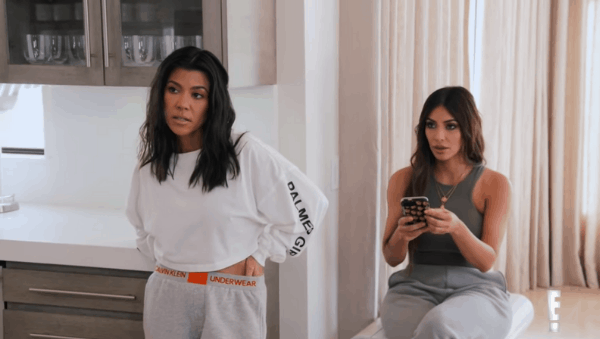 The latest episode of Keeping Up With the Kardashians was nothing short of intense. While the show tried to make viewers care about Kendall Jenner and Scott Disick skydiving or Kim Kardashian‘s ridiculous 20-year high school reunion woes, the only storyline worth noting revolved around Khloe Kardashian. So, that’s what we’re going to head right into today.

Seemingly all at once, the whole Kardashian Jenner crew learns about the Tristan Thompson cheating scandal. Like everyone else, they were suitably shocked upon hearing that Tristan was spotted with multiple women shortly before Khloe was due to give birth (in other words, he’s the lowest of the low). Kim texts everyone in their group chat. But, it’s Kylie Jenner who acts like a straight up G and sends Khloe the cheating allegations. She said that it would be best to come from one of them rather than the internet. And, she’s right.

In a later scene, Kim, Kris Jenner, and MJ Shannon discuss the allegations. Kim says that even more of them have come out now. MJ, as wise as ever, says that Tristan will never change if this is how he’s acting while Khloe‘s pregnant. She suggests that Khloe goes for a different kind of man, like an accountant. Honestly, can we get more of MJ on this show? She knows what’s up.

In the middle of the convo, Kris receives a call. After initially ignoring it her assistant comes in to tell her she absolutely needs to pick it up. Once she does, she receives the news that Khloe is having contractions and may be going into labor. Kris is pissed since she says they should have left for Cleveland the night before. She calls Dr. A, who is going to deliver the baby, to tell her they need to leave ASAP.

In a flurry, Kris tells Kourtney and Kim, who were still FaceTiming, to wrap things up, which they do. Kim calls Khloe to find out what’s going on. During the call, Kim realizes that she should indeed go to Cleveland to be with her sister, pushing her high school reunion to the side. Kim originally risking not being there for Khloe all for the sake of her high school reunion never made sense to me. Thankfully, she did go support her sister (because, obviously).

On a phone call, Khloe tells Kourtney that she wants everyone to be civil with Tristan during the situation. She said that she’s going to put her feelings aside because she still wants to enjoy the day with him. Just as Kim, Kourtney, and Malika Haqq are set to fly to Cleveland, Malika gives a talking-to to the sisters. She tells them that she’s tasked with keeping everyone in check so that Khloe has the best birthing experience possible. And, at this moment, I have never stanned Malika harder. She truly just wants the best for her bestie during this amazing experience. That’s a true friend right there.

Are you, like me, still not over this Tristan cheating scandal? Tell us your thoughts on this and more in the comments below!

Be the first to leave Comments for KUWTK Recap: The Betrayal