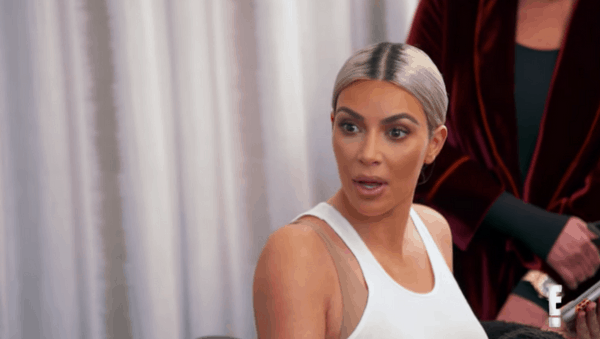 The 15th season of Keeping Up With the Kardashians started off with a bang. As you’re probably well aware by now, Kim Kardashian and Kourtney Kardashian had one of the worst fights ever in the history of the show. Seriously, it was bad. In case you missed all of the drama, we’re here to help. Read on to find out everything that happened in the Season 15 premiere of KUWTK.

The episode begins with Kim‘s birthday celebration. At the party, Kim and Kourtney talk about Khloé Kardashian‘s ongoing awkwardness with Kourtney. What they really mean is that they had one weird phone convo and that’s probably it. Kris Jenner then makes a toast in honor of Kim where she jokingly calls Kim her current favorite daughter. Kim hits back and says that everyone knows her fave is Kylie Jenner now and… that’s probably true.

During one of their hangouts, Kim tells Kourtney about her Christmas card idea. She wants to bring the tradition back since they didn’t have a card last year. Kourtney is seemingly all for it, as is Khloé, who Kim calls on the phone. So, nothing could go wrong!

Backstage at Jimmy Kimmel Live, Scott Disick chats with Kim. Besides the Xmas card fiasco, the other topic at hand this episode has to do with Scott and his teenage girlfriend Sofia Richie. They don’t get into too many details before Kim heads onstage to Kimmel’s substitute co-host, and everyone’s annoying “BFF,” Jennifer Lawrence.

Kim, Khloé, and Kourtney all meet up to discuss the Xmas card situation. Kim, who’s been planning the whole ordeal, asks for some help with her other tasks since she’s too busy. Khloé offers to help with baby shower planning while Kourtney remains radio silent. Neither Kim nor Khloé are there for Kourtney‘s attitude.

Scott meets with Cici, the cousin of Robert Kardashian Sr. because they apparently have a good relationship? She first asks him if he’s sober. He replies that he’s not completely sober but does have his drinking under control. Cici then asks him about the other topic at hand, Sofia. Scott relates that he is happy in his relationship with her. He also shared a similar sentiment with a friend while on a hike. Still, am I the only one who’s hoping for a Scott and Kourtney reconciliation?

Then, the drama you’ve been waiting for. Kourtney brings up to Kim that she’s not happy about the Xmas card shoot’s schedule. She absolutely needs a hard-out at four so that she can spend time with her kids. Kim is instantly frustrated, which is understandable. After all, she’s been planning it with a zillion famous, busy KarJenners in mind. However, her frustration didn’t give her the right to tear down Kourtney like she did.

Kim says that everyone has businesses that they have to handle. Since Kourtney doesn’t, she should be a lot more accommodating than she’s being. Kourtney says that she doesn’t even want to do the shoot, which was evident from the get-go really. She then storms out. When she leaves, Kim tells Khloé and Kris that it’s fine if she’s not in the shoot because “she is the least interesting to look at.” It’s simply not true. It’s also one of the harshest things I’ve ever heard anyone say about a family member on reality TV. Of course, Kourtney overheard it before leaving.

The ladies are all shocked that Kourtney left. Really? Did they tune out that whole verbal beatdown or something? Khloé calls Kourtney to find out what’s wrong (lol). Kourtney says that the way Kim spoke to her was disgusting (true). Kim overhears it and yells some more about Kourtney‘s presumed laziness. Kourtney replies, through tears, and says that these photo shoots and such aren’t as important to her as being a mother is. None of her family members seem to be at all sympathetic to Kourtney in this moment. It’s actually really sad.

Kourtney comes back to the scene to explain herself. All she does is double down on what she said before, as does Kim. Kim proceeds to give her the lamest apology I’ve ever heard. Kourtney, rightly, calls her out on her insincerity. Before Kourtney leaves once again, she relates that she’s over these “fake relationships” with her family, which cuts close to Khloé. Kim doesn’t seem to care at all, though. Kourtney also vows not to come to the photo shoot.

Cut to the Xmas shoot and… Kourtney‘s there, of course. She relates that she’s doing it for her kids. But, the tension between her and Kim is so thick that you could cut it with a knife. I mean, they were posing side by side and barely stole a glance at each other. It really shed a new, awkward light on their 25 Days of Christmas series, huh? Another thing that was awkward? Kendall Jenner had to be photoshopped into the family’s card at a later date. That had nothing to do with the drama, but it was weirdly hilarious.

Kim eventually had her baby shower for Chicago, which was gorgeous btw. But, Kourtney, unfortunately, missed out because she was still in a bad place with Kim. Hopefully, those two can get their relationship back on track sooner rather than later.

Did you think Kim’s verbal attack on Kourtney was out of line? Let us know in the comments below!

Be the first to leave Comments for KUWTK Recap: Photo Shoot Dispute