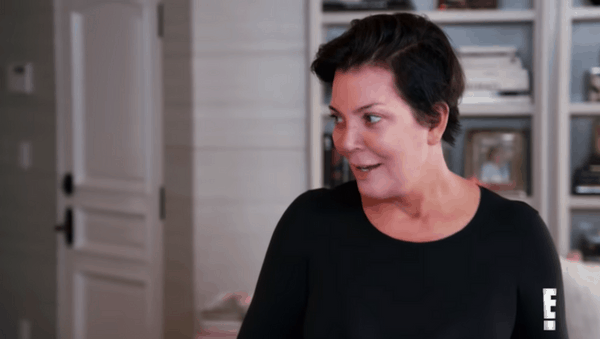 We got a respite from the more intense Kourtney Kardashian-related drama this week. In the latest episode of Keeping Up With the Kardashians, it was all about Khloé Kardashian‘s pregnancy, Scott Disick‘s everlasting immaturity, and Kim Kardashian‘s random as all hell new interest. So, it was still a lot.

The episode starts off with Kim, Khloé, and Kourtney talking about dead people and being drunk, really. Kim said that a friend of hers recently went to a funeral. At the funeral, the friend said that the deceased individual looked different in their casket. Somehow this anecdote made Kim interested in the life of a mortician. Yeah, I don’t get it, either.

Kris Jenner and Khloé then have a discussion about Khloé‘s pregnancy. Khloé says that she doesn’ really have any intense cravings. Kris thinks that that’s crazy. She wants Khloé to enjoy her pregnancy and eat what she wants. However, as she’ll soon learn, it’s not that simple.

Scott Disick meets up with Kris to tell her about his interest in the real estate industry. In other words, this is a not-so-subtle set-up for his KUWTK spin-off. He asks Kris to be his business partner because who doesn’t want to team up with Kris on any business project?

Then, Khloé explains to Kim why she’s not down with Kris‘ all-you-can-eat pregnancy plan. Since she and Tristan Thompson are taller, bigger individuals, her doctor is worried that their baby could grow so big that Khloé would need a C-section. Khloé explains that she wants to avoid that, so she can’t exactly gain an extreme amount of weight or anything.

Scott and Corey Gamble hang out together. Talk about a random pairing. But, here we are. The guys head to a ski supply shop together as they discuss their upcoming Art Basel trip to Miami. Apparently, they’re teaming up to networking with the best of the art world. Nothing could go wrong there, right?

Kim then tries to get her mortician on, with some help from Kris. She has her mom lay down, to play dead so that she can do her makeup. Where did this morbid, new obsession come from anyway? She does do a good job on her makeup though, despite Kris scaring her at one point.

Cut to Art Basel and there’s already trouble. A producer tells Corey, who just arrived, that Scott is “dead asleep” and MIA. So, basically, Corey came all the way to Miami (specifically for Scott) for nothing. Later, Corey tells Kim and Kris about the situation. And it’s safe to say that Kris especially is less than pleased by Scott‘s behavior.

Kris, still not understanding Khloé‘s situation, brings her dozens of Krispy Kreme donuts. Khloé explains her C-section worries to Kris but she still doesn’t quite get it. It seems like Kris really does mean well, though. She just wants Khloé to enjoy her pregnancy.

Kim goes all-out with this mortician dream as she heads to a mortuary with her makeup artist, Mario. A mortician takes them on a tour of the facility and explains exactly how she dresses a body. I’ll spare you the details because they were pretty graphic. Kim and Mario then get to put their mortician skills to use on a (faux) dead body. While they do well, Kim realizes that she’s not as into it as she once was.

Scott meets up with Kris and she seeks an explanation for his poor behavior. He doesn’t see anything wrong in how he acted and doesn’t offer up any kind of apology. He says that he can let loose when he wants to. That’s true but not when you freakin’ made set plans with someone, Scott. By the way, Scott is in his 30’s, this crap just ain’t cute. However, he does note that he appreciates Kris‘ input and concern.

The episode ends with Kris attending one of Khloé‘s check-ups with her doctor. It’s then that she finally realizes that Khloé wants to maintain a healthy diet in order to avoid a C-section situation. The doctor also reveals that Khloé is indeed on track to have a natural birth. So, the episode gets to end on a positive note!

What did you think of Scott’s behavior here? Should he have apologized for bailing on Corey? Tell us your thoughts on the situation in the comments below!

Be the first to leave Comments for KUWTK Recap: Drop Dead Gorgeous