Home > Buzz Kenya Moore and Michael Rapaport Get in Ugly Fight on WWHL, 'You Know You're the Villain Right?'

Kenya Moore and Michael Rapaport Get in Ugly Fight on WWHL, 'You Know You're the Villain Right?'

The video of last night's show is CRINGY 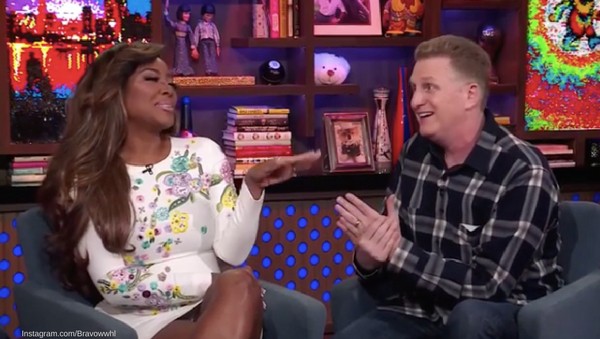 We didn’t see this one coming. Real Housewives of Atlanta star, Kenya Moore, and actor Michael Rapaport got into BIG time on Watch What Happens Live Sunday night. The two have been beefing ever since they went to war two years ago over Twitter, but on Sunday things got ugly as host Andy Cohen asked Kenya and Michael to explain why they had so much animosity between them.

It all started in 2016, when Michael, who is apparently a huge RHOA fan, decided to chime in with his feelings on the fight between Kenya and Porsha Willaims. “Krazy @KenyaMoore was bullying @Porhsa4real [when] she got the wig snatched, she should have no regrets about that wig snatch,” he wrote in April of 2016.

Krazy @KenyaMoore was bullying @Porsha4real went she got the wig snatched,she should have no regrets about that wig snatch #RHOA @Andy

Of course Kenya was not going to take Michael’s criticism laying down. She hit the reply button lightening quick and let Michael know where he can keep his opinions (to himself). She writes, “@MichaelRapaport u are pathetic & ignorant 4promoting violence on any level. Please get a job 2 keep ur cable 2 watch me every week.”

@MichaelRapaport u are pathetic & ignorant 4promoting violence on any level. Please get a job 2 keep ur cable 2 watch me every week #RHOA

The two had seemed to drop their fight, but things got fired up again when Michael reacted to Kenya’s feud with season 8’s Kim Fields. “Krazy @kenyaMoore is lucky Kim Fields didnt go Rambo on that ass for physically touchin her,” he writes.

It should have come as no surprise that when both Kenya and Michael were booked for WWHL, that the two were going to have to eventually address the elephant in the room. Luckily Andy Cohen was there to facilitate a peaceful ceasefire. (I’m kidding. Andy would never do that.).

“You do know that you are ‘on the show’ like, a villain, right?” Michael asked Kenya with unnecessary air-quotes. “You have to know this, correct?”

“Michael I don’t need you to tell me what I am or am not,” Kenya retorted. “I appreciate you being a fan though. Thank you for watching, keep the cable on. A new job would help with that.”

Michael tried to save face and attempted a feeble clapback, “Oh Kenya, you wish you were me, Kenya.”

Kenya had the last laugh though and she didn’t even break a sweat, “A middle-aged, fat, white guy, NO!” she quipped. “And out of work!” she added.

Michael scrambled to find something to fire back at Kenya and all he came up with was that she came with a big glam-squad. Okay, we get it, Michael. You aren’t a professional shade-thrower like the housewives, but even we have to admit that that was pretty lame.

Then Kenya, trying to end this for once and for all, laid the smack down, “You do know that the housewives are all women right? We’re not giving out any peaches.”

Things got even uglier on the WWHL After Show, when a fan called in and told Kenya that “if Michael wanted to he could bring the noise.” To which Kenya told her, “he’s had a lot of opportunities honey and it was a little squeak.”  Michael, seemingly trying to prove that he could “bring the noise,” tried to put Kenya down again by saying “Kenya’s feet are ashy as f***. Them s***s are ashy. I didn’t wanna say it on live TV ’cause I’m a gentleman, but pan down to them s***s. She can cut glass with them s***s.”

As ugly as their feud has been, it is not a good idea for the “old, fat, white guy,” to tell an African-American woman that her feet are “ashy as f***.  This kind of barb speaks to a real ignorance that Rapaport has consistently displayed and is sadly not surprising, as he has been trading on the culture of POC since the beginning of his career. Kenya is flawed, but Michael is the worst kind of culture-vulture and we do not need him as a spokesperson of the peanut gallery.

In short, he sucks.

Please let your next book be entitled "The time when kenya moore read TF out of me" 😘👸🏾 Be well! https://t.co/3VM5GavSpj

Let us know if you’re Team Kenya or Team Michael in the comments!

2 Comments for Kenya Moore and Michael Rapaport Get in Ugly Fight on WWHL, ‘You Know You’re the Villain Right?’