From singing to selling to serving, RHOA's original boss b**** is doing it all! 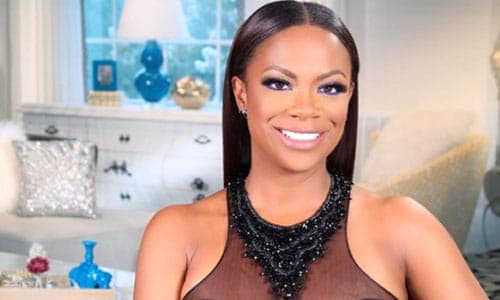 2017 is the year of Kandi Burruss! The Real Housewives of Atlanta star is a recent Fortune Insider award winner for being an influential player in business and beyond. It’s easy to see why this Bravolebrity is so hot! Her career this year alone consists of singing and performing, acting in a movie, opening a restaurant, running her clothing boutique, launching a children’s product line, and promoting her collection of sex toys. Phew. We have no idea how this mother of two finds the time, but it’s NO LIE, this woman’s hustle on the Burruss brand is real!

Since it's #MoneyMonday I decided to post this quote from me when I was speaking on the Power Panel at #essencefestival2017. A lot of people feel like they can't be cool or support other people who have businesses in the same lane as they have. I personally have no problem being friends with & supporting people who have some of the same businesses. When I go to Macy's there are tons of cosmetic lines right next to each other in the same area of the store & they are all making money. I use this as example to show that we can all post each others brands, do pop up shops together, & celebrate each other's success. No one's success has to hinder the other. Network & build each other up! This is for all my #PowerPlayers out there! #WeBleedSuccess

The Grammy Award winning singer / producer made headlines when she reunited with her 90’s group members Tameka ‘Tiny’ Cottle-Harris, LaTocha Scott and Tamika Scott. Their breakup was dramatic so the reunion 20 years later for the Essence Festival was one of the most anticipated performances of the year. The news of the reunion fired up their fans so much they added a BET awards performance and launched an Xscape reunion tour. The reunion also inspired Love & Hip Hop franchise producer Mona Scott-Young to create a reality show documenting their coming together and preparation. The docuseries is set to air on Bravo in November along side RHOA season 10!

This pic describes how we felt when we found out our concert SOLD OUT in 1 DAY!!!!! Thanks to everyone in Detroit who bought tickets! We love y'all! Can't wait to hit the stage with #NEXT & #Total.

Pics from last nights #XSCAPE show! All of us serenaded our husbands. I brought my love @todd167 on the stage. Thank you @angelbrinks @erika_lapearl_mua & @thatshekinah for getting me right for the night! & thank you #NoIGDexter for the pic.

Lights camera action! Thanks @sewjodie & @latashawright for getting me together! #Xscape 📸

In 2011 Kandi launched Bedroom Kandi, the successful multi-level marketing brand of affordable luxury sex toys and products. To ensure her fans have a happy ending at the Xscape concert, Kandi has been cross-promoting her sex toy line with exclusive appearances for fans who buy the products at their shows!

It's time! Meet me & the #BedroomKandi team at the Cobb Energy Center tonight. 7-9pm

Come see me after the show!

Kandi Burruss’ restaurant, Old Lady Gang, was inspired by the Southern recipes mama Joyce Jones and aunts Bertha Jones and Nora Wilcox, affectionately known as the “Old Lady Gang,” taught Kandi in the kitchen! In a joint effort with husband Todd Tucker, OLG opened in Atlanta so Kandi can share her favorite dishes on the menu with her fans and celebrity friends!

Starting today @oldladygang Southern Eatery is open at noon Tuesday-Sunday. Stop by for lunch! Thank you @hannah_davanzo for stopping by & making this video.

Looks like I was giving @monascottyoung an earful! 😂😂😂. @rasheedadabosschick & Mona came thru to @oldladygang today. 😁

Inspired by Kandi and Todd’s adorable baby boy Ace Wells Tucker, Kandi recently launched Raising Ace. A company with a cause, Raising Ace creates high-quality uni-sex baby and children’s products that make parenting fun and engaging.  The company also contributes a percentage of its earnings to non-profit organizations that support single parents, parents struggling to get by, and organizations that promote parenting education.

Morning cuteness! My little Ace! Go to @acewellstucker's page to see the other pics. This is after he calmed down…. 😂 towel from RaisingAce.com

I will be presenting my brand new baby collection at #Babypalooza at Blogger Bash in NYC! I can't wait for you to see #RaisingAce @shopraisingace @bloggerbashnyc #rhoa #bbnyc #Babypalooza #babyproducts

Kandi’s clothing store, Tags Boutique, first opened its Atlanta doors in 2009 and expanded to a second location in Las Vegas. Kandi has been modeling her wares on Instagram to promote both shops lately. Tags ATL has also made some cameo appearances on RHOA!

Last night's look rocking another dress from @tagsboutique. We have so much new inventory. Shop now at TagsAtl.com. Thank you @thatshekinah 💇🏽 & @erika_lapearl_mua for getting me together yesterday!

I brought the #OldLadyGang to Vegas. We had to stop by @tagsboutique while we are here! 6569 S LasVegas Blvd Suite C172.

Beat pics of Kandi started circulating on Instagram scaring fans! She came clean that she took the unexpected role for Never Heard, a story centered around one man’s struggle to avoid the sins of his father. Never Heard opens in theaters October 2017 – just before the premiere of RHOA and the Xscape docuseries!!

So many people asked me about this photo. I played the role of a mother addicted to drugs in @neverheardmovie that is going to release in October. I loved this role because it's not what people would expect from me. I can't wait for it to release so that you can see it! Swipe left if you haven't seen the preview clip. #NeverHeardMyFatherSpeak #Actress 🎥 #entrepreneur #songwriter #singer #IDontFitInABox

Nene Leakes is taking her peach back, Kenya Moore might get cut if her new hubby isn’t on the show and questions still swirl as to whether Phaedra Parks will be back after the explosive lies she spread about Kandi in season 9. One thing is for sure, the OG RHOA star is already filming and taking home trophies for slaying Cynthia Bailey looks!

She's Ready For More! Kandi Burruss Confirmed To US Weekly That She's Returning To RHOA For Season 10, In Addition To Starring In Bravo's Upcoming Xscape Docuseries. "Yes, Actually I Am Doing Housewives Now And Xscape Is Having A Reality Show As Well, Im Doing Both At The Same Time. Right Now We're Taping Both Shows. Xscape Will Be On Bravo This Fall Along With Housewives. I Hope Everybody Supports The Show As Much As They Support Housewives." The Reality Star Told US At The BET Awards On Sunday, June 25th. In Fact, Kandi Believes This Season May Be Wilder Than The Last. "It Was A Lot Of Drama Last Season, So I Kind Of Prepared Myself Now That Im Coming In This Season, Season 10, Its Gonna Be Even Crazier," She Said. "Its A Lot Of Different Things Going On, Not Just With Me, But Some Of Our Past Castmates Are Coming Back, And We're Gonna See How That Goes. We Just Started Taping This Past Week. I Havent Even Seen Everybody Yet." She Said. #RHOA #RHOA10 #KandiBurruss #Xscape

Tonight was the #50Cynt challenge! We all were suppose to dress up as different versions of @cynthiabailey10. Thanks @carmoncambrice for coming up with the idea to do the coke Can wig pic of Cynthia! Thanks @latashawright for that mean Smokey eye & red lip! @gochasalon you killed that coke can wig!!!! What do y'all think?! Did I pull it off???

Check out all the hot spots Kandi Burruss has been on Real Housewives of Atlanta!

Have RHOA questions? We have answers! Check out our RHOA Q&A!