Jill is not feeling the hate. 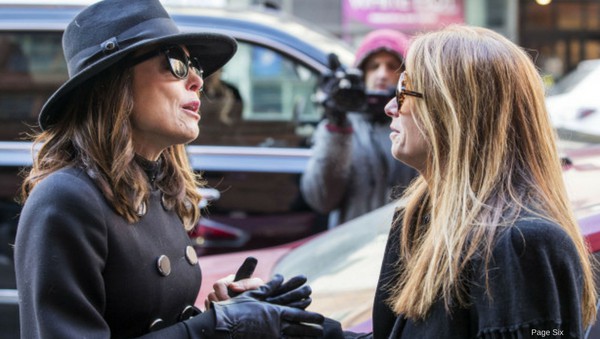 It looks like Bethenny Frankel has gotten herself into some hot water, but this time her former-friend Jill Zarin is here to back her up! Twitter recently took Bethenny to task for making insensitive comments at Jill’s husband’s, Bobby, funeral. But the Zarin Fabrics owner was quick to correct fans that she wasn’t offended by Bethenny’s remarks.

The drama started when fans were quick to react to Wednesday’s episode of the Real Housewives of New York. In the episode, Bethenny and Jill meet face-to-face for the first time in eight years, after Bethenny decides to pay her respects to Bobby.

In the episode, Jill bursts into tears when she sees Bethenny, “I’m alone now,” she says. “I don’t know what I’m going to do without him.  I haven’t been alone since I was 20 years old.”

The comment seemed to be a lightening rod for some Bethenny-hate, as some fans on social media felt that Bethenny was selfish for saying that she was alone too.

“Who says “I’m alone, too” to a woman who just lost her husband?” writes one Twitter user.

Who says "I'm alone, too" to a woman who has just lost her husband?#RHONY

While this user writes, “Everything with Bethenny is a competition. Even death and I’m no fan of Jill.”

Everything with Bethenny is a competition. Even death and I'm no fan of Jill. #RHONY

And this fan wants Bethenny to know that it’s “not all about you!”

Jill crying to Bethenny: "I'm alone, what am I going to do?"

Bethenny crying to Jill: "I know. I'm alone too."

Really Bethenny? Her husband just died! It's not about you! 🙄😒 #RHONY

However, despite the social media backlash, Jill spoke out in support of Bethenny. Responding on Twitter that it is hard to know what to say at a funeral and that she “never took it as selfish.”

Don’t be hard on her. Who knows what to say in situation like that? She was trying to make me feel better and never took it as selfish. Her coming meant the world to me and Ally but especially Bobby who was only 10 feet away if you watch the videos the press took. https://t.co/c62cxBsLV4

Bethenny herself has yet to respond to the haters (quite frankly, she has bigger fish to fry between Carole and Ramona), but it is nice to see Jill clearing up this bit of RHONY drama.

Do you think Bethenny was being selfish for her comment at Bobby’s funeral? Let us know in the comments!