Jersey Shore stars Snooki and 'The Situation' dish how Ronnie Ortiz-Magro has ignored them since his arrest. 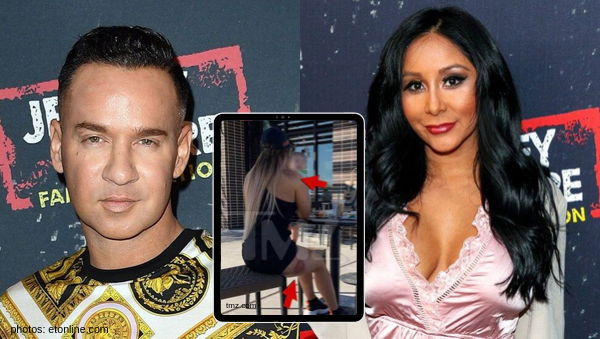 No time for GTL until we get to the bottom of this drama!

Jersey Shore star, Snooki Polizzi, slams Jen Harley‘s injury pics as she and Mike ‘The Situation’ Sorrentino dish how Ronnie Ortiz-Magro is ignoring them. The tea was spilled on the It’s Happening with Snooki & Joey podcast.

Mike is newly released from federal prison and sounded frustrated after his multiple attempts to get in touch with Ronnie, to which he hasn’t replied. The Situation told Ronnie to “wake the f**k up” before changing his tone. Snooki said also reached out to her troubled costar, to no response.

Snooki focused her attention at Ronnie’s baby mama, Jen, for the paparazzi photos showing off the injuries stemming from an alleged domestic violence issue with Ronnie. “My thing is with Jen in this photo. Cause there’s a photo released. She’s out to lunch with Ariana. She’s wearing a tank top and shorts, and she has bruises everywhere. I feel like she went out intentionally to get a photo of her.”

Snooki’s podcast rant continued with “You don’t have to be wearing a tank top, showing your bruises and the bruise on your leg. She’s wearing booty shorts to show it off. Like, ‘Girl, you can go out with your daughter and have lunch but cover those up so it’s not a thing.’ She wants it to be a thing.”

Do you agree with Snooki in that Jen is trying to make her bruises a thing? Sound off in the comments!