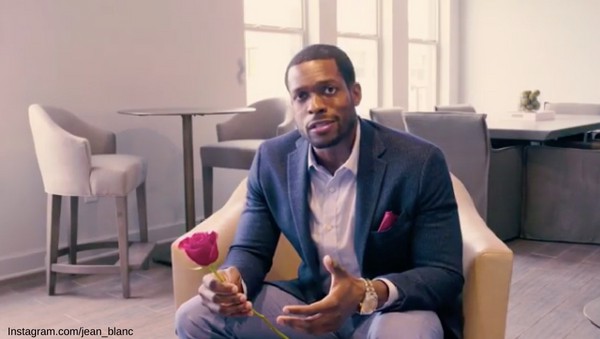 We guess he really wasn’t there for the right reasons. After being kicked off of the current season of The Bachelorette last night, colognoisseur, Jean Blanc, has released a press statement today, unveiling his new perfume for women, Toujours Rose.

While many contestants on The Bachelor and The Bachelorette use their platforms as a means for personal gain (hello, Instagram sponsorship deals!), this business launch leaves a particularly bad taste in our mouths.

According to the press release, Jean Blanc has partnered with, “internationally renowned fragrance manufacturer, Alpha Aromatics, and turnkey product development company, Gynex Fragrances, to bring to market the first of a series of fragrant jewels he has tailored and blended to empower, celebrate, and encourage confidence for today’s woman.”

Jean Blanc also posted about his new product on Instagram, writing that “part of the proceeds from the sale of my new fragrance #toujoursrose (forever rose) to the #metoo movement, as well as another charity to be named at a later time.” This bottle looks exactly like Miss. Doir, right?

“Empowering women through fragrance” Proud to announce that we are donating part of the proceeds from the sale of my new fragrance #toujoursrose (forever rose) to the #metoo movement, as well as another charity to be named at a later time. Can’t wait to discuss this at great length. “The longest lasting rose-scented fragrance ever created” through microencapsulation 🌹 🌹 🌹 🌹 🌹 🌹 🌹 🌹 🌹 #femaleempowerment #colognoisseur #toujoursrose #newventure #enterpreneur #FragranceLaunch #PerfumeLaunch #SoExcitied #OpeningWeek #DiscountDaily #Fragrance #Perfumes #Beauty #JeanBlanc #ToujourRose #Bachelorette #Becca #TheBachelorette #Bachelor #ABC #PrimeTime #Entrepreneur #CEO

A product launch where the proceeds go towards female empowerment would be endearing if he were to announce the percentage of the price that will be donated and which charity he will be working with (a later video published to Instagram says, Girls for Gender Equity and another charity which will be announced in the future). Otherwise….this is sort of meaningless.

Introducing #toujoursrose by 🌹Jean Blanc Boutique. Sometimes you have to revisit your first love to get over a recent heartbreak. Thank you everyone for your support. This is the only thing that has kept me positive throughout this entire situation. #jeanblanc #liquidluxury #jeanblancboutique Coupon code: JEAN Www.jeanblancboutique.com @cameraandflask thanks for the quick turn around!

Due to the overwhelming response to my website I’ve decided to drop this video today! To clarify, I am indeed donating part of the proceeds to the #metoo movement, Girls for Gender Inequality, as well as another charity to be named at a later date. Please dm @jeanblancboutique for details “Empowering women through fragrance”. Apologies for the website being down for a bit, it is back up now. Coupon code expires later this week. The buying experience is a lot smoother via PC. #metoo #colognoisseur #toujoursrose #liquidluxury #empowerment #ABC #TheBachelorette #bachelorette #bachelornation

If you’ve already forgotten, Jean Blanc made a major party foul last night when he handed Becca a custom made perfume called, Miss Becca Blanc (yikes!) and then confessed that he was falling in love with her. Jean Blanc went in for the kiss (which Becca seemed uncomfortable receiving), and then told him that she did not feel the same way.

Becca decided that perhaps Jean Blanc’s time in the mansion was over and as Becca walked Jean Blanc out, he asked her IF HE COULD GET THE PERFUME BACK (awkward) and then he told Becca that he only told her that he was falling in love with her because he thought that was what she wanted to hear.

Obviously, Jean Blanc messed up big time, making himself not only into a villain for Becca’s season, but labeling himself as not there for the right reason, which is a serious accusation on the franchise.

So..launching a perfume…seems a little opportunistic and tone deaf, no?

Would you buy Jean Blanc’s perfume? Let us know in the comments!