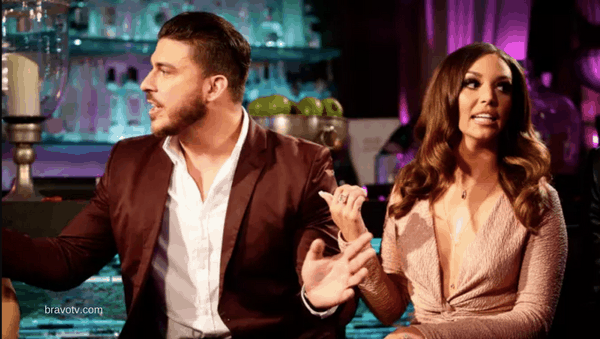 Another day another messy Twitter fight between the cast of Vanderpump Rules.  The drama unfolded after the last episode of the show where viewers saw Scheana Shay introduce Brittany Cartwright to a new man behind her boyfriend Jax Taylor’s back. Now Jax is firing back on social media and the two reality stars are officially on the outs with each other.

Taking to Twitter on Thursday, Jax lashed out at Scheana, writing that she needs to butt out of his relationship and caustically tweeting that Scheana “can’t keep a man.” Ouch. The 38-year-old Jax was responding to a question posed by the Bravo Twitter account, which asked him what he thought of Scheana’s shady set-up.

Well Britt I are doing amazing and she can’t keep a man… that is fact so … https://t.co/MEBygeDYeu

A fan on Twitter also wrote in to the reality star, tweeting, “Shady move, but you gotta love @scheana.” But Jax didn’t seem to feel be feeling the love, writing that it must “make her feel better I guess who knows…”

That’s what she does..makes her feel better I guess who knows.. https://t.co/IEEnv6HJH0

He also wondered, “why people need to involve themselves in my relationship when they can’t even keep there [sic] own going is beyond me.” Damn, that is cold.

Why people need to involve themselves in my relationship when they can’t even keep there own going is beyond me. But whatever makes ya happy in life. https://t.co/t8S02Qoywu

Scheana has yet to address Jax’s remarks on social media, however she did have plenty to say on the Vanderpump Rules After Show. In a group interview with some of the cast, Scheana gets candid about her fiery relationship with her co-star. “When it comes to [Jax]… I’m like, ‘oh you want to come for me, here’s the thing honey, I got someone younger, taller, and hotter who’s interested in your girl.'” And she clearly isn’t afraid to use this new guy to break Jax and Brittany up!

What do you think about @scheana inviting another guy out for @BNCartwright? She has some thoughts and some shade for @mrjaxtaylor, on the #PumpRules After Show: https://t.co/qYm8eYHwm3 pic.twitter.com/vIcgkHVeZN

Interestingly, this whole exchange has come out just after RadarOnline has reported that Jax’s mistress, Faith Stowers, will be appearing on the Vanderpump Rules reunion show. Meanwhile, The Daily Mail is reporting that Brittany was seen wearing an engagement while walking around SXSW this weekend. Can you say yikes?

We all know that Jax has a little *problem* with staying faithful, but tell us if you think that what Scheana did was downright shady in the comments!

Be the first to leave Comments for Jax Taylor Slams Scheana Shay on Twitter, “She Can’t Keep a Man”