After an alleged reservation snafu, the celebrity chef criticizes Alinea Restaurant on Instagram, forcing the restaurant owner to get involved. 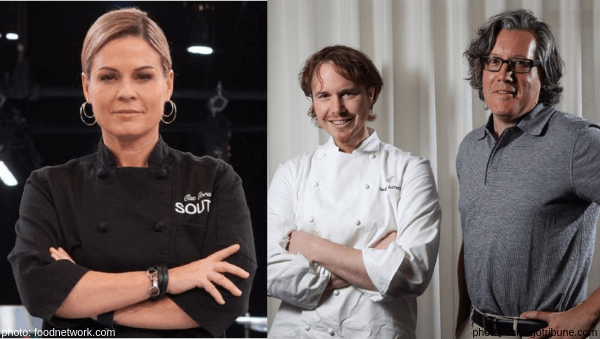 Friends, two of my favorite worlds have crossed leaving me hungry for more: food and fueds. This is especially exciting because it involves Cat Cora, a ‘celebrity chef,’ VS Alinea, a Three Star Michelin Restaurant. Try to keep up…

Iron Chef Cat Cora’s assistant, Veronica Van Sant, requested a reservation for her boss at Chicago’s Alinea, one of the best restaurants in the country. With such short notice, Alinea offered a table at 5 p.m. Friday in its Gallery room, instead of the Saturday reservation originally requested by the Iron Chef’s assistant.

Well, Iron Chef Cat Cora did not show up to her Friday reservation, but DID show up to the reservation she originally requested that Alinea couldn’t honor. That’s when it got ugly.

This is a screenshot, because the Iron Chef took this post down…

Nick Kokonas, the owner of Alinea, didn’t waste any time before sharing his side of the story. He shared an image of the emailed counteroffer with the Chicago Tribune, as well as a screenshot of confirmation and payment for the Friday reservation, which was in the name of Cora’s assistant.

The next morning, Nick responded. First, with a still image from Alinea’s security cameras revealing the celebrity chef flipping off the restaurant staff. Way to keep it classy, Cat.

Later, Nick shared the post, revealing Alinea’s timeline with some other juicy details. Cora admitted to flipping off the staff in a comment on Nick’s Instagram post, “As I left I did flip them off for being so rude and disgraceful,” wrote the rude and disgraceful Iron Chef. SMH.

This was shocking. Nick noted in both his IG post and later emails with the Chicago Tribune that Alinea staff described the situation as among the “most difficult” they’ve experienced. I’ve worked in restaurants. Hungry people are the worst, so to say a fellow chef is the ‘most difficult’ guest they’ve had is gross. Cat Cora should be ashamed of herself.

Cat couldn’t resist sharing her side of the story to the Chicago Tribune as well. “After a frustrating encounter, the post was originally to start a conversation about what hospitality means to people. My wife and I did not like the way the restaurant handled the mistake they made with our reservation. They took their post down, we took our post down. We accomplished what we wanted: A conversation. We wish Grant (Achatz), who is undeniably one of the most accomplished chefs, only the best. We always try to support local restaurants and chefs where ever (sic) we go and will continue to do so. We Love Chicago, it’s one of our favorite cities and we can’t wait to come back.” Sounds to me like she realized how entitled she came across and was trying to save face.

Nick is my second favorite restaurant owner, to Lisa Vanderpump of course, because he laid into Cat: “No error was made with the reservation. It was clear when she arrived that she knew she didn’t have a spot… and she was nearly 20 minutes late to the supposed reservation anyways. Her PR team is trying to create ambiguity where she acknowledged at the time that there wasn’t any — she’s just used to be accommodated by restaurants… at Alinea it’s simply not possible to do a dinner ‘on the fly’… or desirable to our team or other guests.” Nick Kokonas is the REAL Slim Shady. Respect.

The shade didn’t stop there… “Grant has never met her,” Nick continued. “Phone call notes from our side state that it is clear that she might show up trying ‘to get in anyways.’” Alinea’s owner also addressed Cat’s original post: “Her post was in no way a catalyst for conversation… nor is saying f-you to our staff. She’s the worst of our industry… that simple,” according to the Chicago Tribune. I love Nick so much, for the record!

I’d like to give a shout out to a podcast I heard this story on earlier today. Do you remember Richard Blais from Top Chef? I was a big fan of his from the hit Bravo show, and now I listen to the podcast he does with his wife called Starving For Attention with Richard Blais. This was my favorite episode yet, probably because of all the tea spilled. Click here if you would like to listen for yourself!

Whose side are you on? Comment Team Cat or Team Alinea with your reason why in the comment section!