The RHOC star celebrated her future with Steve Lodge and her costars! 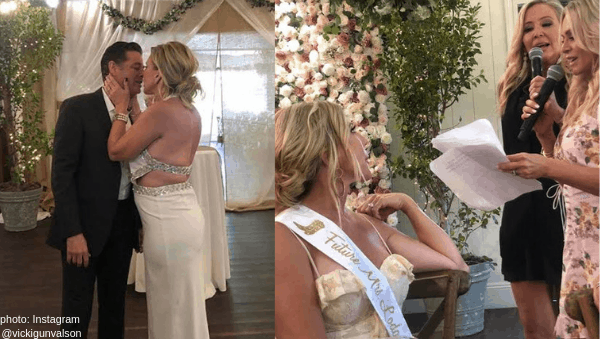 Congratulations to the OG of the OC, Vicki Gunvalson, as she celebrated her engagement to Steve Lodge. The Real Housewives of Orange County star was treated to the party by her costars, Shannon Beador and Tamra Judge.

Thanks to @tamrajudge and @shannonbeador for hosting such an beautiful engagement party for @stevelodge_oc and I. We loved every minute of it. I’m still trying to learn the 2step. #season14, #finalparty #engagementparty

The bash was held at the Coto Valley Country Club in Trabuco Canyon, California and had a western theme. Shannon and Tamra definitely were dressed the part!

In addition to 2/3 of the tres amigas celebrating their partner in crime, Emily Simpson also joined the OC housewives to celebrate the happy couple!

Kelly Dodd attended the party also- joined by NY Times bestselling author and therapist, Dr. Mike Dow. More to come as more dirt about this odd couple is revealed! (I have soooo many questions!)

Coming to you with acts of love & kindness . .. the mantra thanks @drmikedow

Though I didn’t see any photos of Vicki’s costar, Gina Kirschenheiter, at  at the party, according to the recently divorced mom’s instagram page, it appears she also attended the bash. Check out her ‘hoedown’ attire!

One final hoedown for the season… coming soon 🍊#RHOC

If you ask me, it looks like Steve gave Bravo what they wanted from Vicki to stay relevant- an engagement. According to Emily’s Instagram caption, it looks like the engagement party was the finale to the season, “Yee haw! That’s a wrap! Congrats @vickigunvalson ❤️🌸🌺🍩⭐️ @tamrajudge #rhoc#party #weout #season14.”

Are you excited to see Vicki’s engagement play out for the upcoming RHOC season? Sound off in the comments!