Spread the Love for Orlando 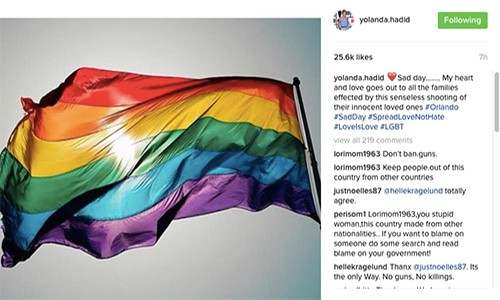 After Sunday’s deadly shooting at Orlando gay nightclub Pulse, Bravo’s Real Housewives reacted and shared their support for the victims and their families. Many are long-time supporters of the LGBT community and helped get the word out using hashtags #MoreLoveNotHate and #PrayForOrlando.

❤️Sad day…….. My heart and love goes out to all the families effected by this senseless shooting of their innocent loved ones #Orlando #SadDay #SpreadLoveNotHate #LoveIsLove #LGBT

What an effed up world. Sad and heartbroken. Thinking of the families and those loved ones lost in Orlando. #prayfororlando

I know prayer changes things and people. Lift up the victims, families, police officers, physicians and nurses who experienced this great tragedy this morning. None of their lives will ever be the same. ?? #prayforpeace #prayforwisdom #prayforourleaders #prayforOrlando

Waking up to this news and I am heartbroken. Honestly at a loss for words … Yesterday Christina Grimmie and now this… ? #prayfororlando

My thoughts and prayers are with you.

When is enough, enough? First the heartbreaking shooting of Christina Grimmie and now the horrific shooting at Pulse Night Club in Orlando. It's time to wake up… Violence, of any kind, is not the answer. #prayfororlando

Can't believe this us happening right in our backyards. Praying for the lives lost and their loved ones in these senseless shootings early this morning. #prayForTheWorld #prayForPeace

Our deepest sympathy to the families of the victims of the senseless, horrific shooting in Orlando. #lovewins

Amen sister ???? @Repost @joyce_giraud ・・・ In these difficult times we must all come together #NoHate #ThankYou to all those amazing people in Orlando waiting to give blood and help our peers ? God Bless you ALL??? #PrayForOrlando

Worst shooting in USA history !!! What is happening to our country #prayfororlando

Prayers for the Victims and their families in Orlando. My heart is heavy and I'm angry. Please pray with me.

????? Rip to the innocent victims. #stopthehate

Prayers and love for Orlando and all the victims and their families. My heart and thoughts are with you❤️???? #prayfororlando #dontletanyonestealyourpride

More love, less hate… My thoughts and prayers are with the #Orlando victims and their families. #loveislove #PrayForOrlando

?? #Peace. Terrorism will not make us afraid and will not stop us from living our lives. #freedom ❤️?????

I am so unbelievably #sad today. Devastating… I won't send thoughts & prayers… I'll send #LOVE. I'm crying just thinking of all the mothers calling their sons in #Orlando, holding onto #hope and their faith in God's mercy. This is where my heart breaks again and again. #? #reality #?

The TOR team’s thoughts go out to the victims, the wounded, and all of their loved ones.