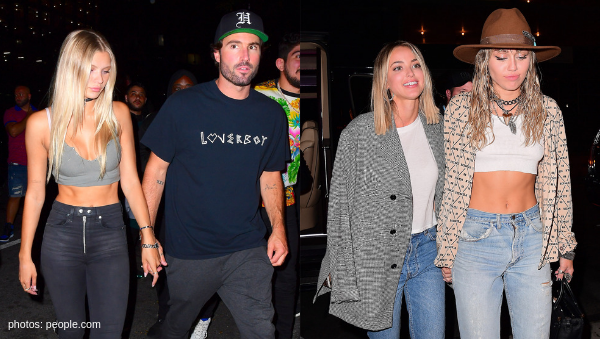 Returning star from the original show, The Hills, Brody Jenner, and his ex wife/fiance/girlfriend, Kaitlynn Carter, were photographed with their new ladies, Josie Canseco and Miley Cyrus at the same VMA after party!

In case you missed the actual awards show, People reported that Kaitlynn joined Miley backstage and supported her ahead of her performance of the break up song, Slide Away, about Miley’s ex-husband, actor and super hottie, Liam Hemsworth. A VMA backstage source told Page Six that Miley was seen “giving a sweet kiss” to Kaitlynn before taking the stage.

Liam filed for divorce from the singer/actress after seven months of marriage. According to People.com, “As Cyrus prepared for her performance behind the curtains, MTV cameras caught a moment between the pair with Carter placing her hand on the singer’s head before she went on the Prudential Center stage.”

Do you predict a future for either of these couples? Sound off in the comments!