From fiction and food to advice and autobiographies, theses stars have been quite prolific! 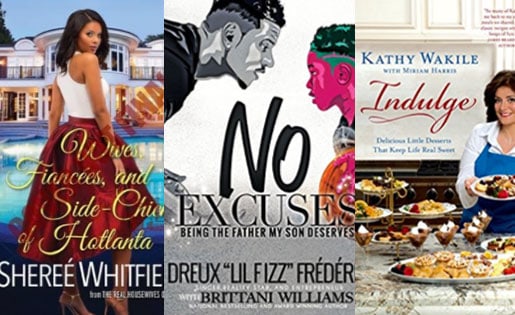 It seems reality stars were quite prolific this winter and everyone is getting into the literary game!  A new slew of books are on shelves just in time for spring break and summer vacay. From Sheree Whitfield’s fictional story to Lil Fizz’s fatherhood autobiography to more of Kathy Wakile’s tasty treats, we can all get a little off-screen entertainment from these reality stars!

The RHOA star’s debut novel is a mix of humor, fiction, and a tantalizing dash of reality…

Woke up this morning feeling blessed…🙏 Thank you to everyone who has supported #WivesFianceesandSidechicksofHotlanta! 💋

Southern Charm’s scene stealer shares advice on how to throw a fabulous cocktail party, to decoding the dress code for any event, to handling to delivering the perfectly phrased insult.

The Art of Southern Charm is officially out on April 18th! Tap the link in my bio to pre order the book to get lower pricing.

Having the drama of her friendships play out on Love & Hip Hop Hollywood, Girl Code: Ethics As A Lifestyle is a guide to encourage women to stick together, while building untouchable friendships.

Parts of Love & Hip Hop Hollywood may be staged, but there’s no doubting the realness of Fizz’s love for his son and striving to be the best father he can be. He now shares his side of the story without the cameras.

4 days till in stores!!! Make sure to get your copy Tuesday April 4th !!! #booksamillion #barnesandnoble #target #indiebound #amazon

The babies and the baby mama drama have long been part of life on Love & Hip Hop New York and now the original star of the franchise has created a children’s book to help explain the concept of blended families.

Famed Olympic athlete turned reality tv dad in KUWTK turned leading transgender figure, Caitlyn Jenner shares her journey in The Secrets of My Life on becoming her most authentic self.

Read about my journey in my book The Secrets of My Life released April, 25! #SecretsOfMyLife

The now friend of RHONJ has released a new cookbook Indulge featuring 75 of her favorite sweet treats and dessert recipes.

As the only American on Ladies of London, Marissa is bring both worlds together with crafted recipes that draw inspiration from growing up in California and now living in London.

Be the first to leave Comments for Get Real: New Spring Reads