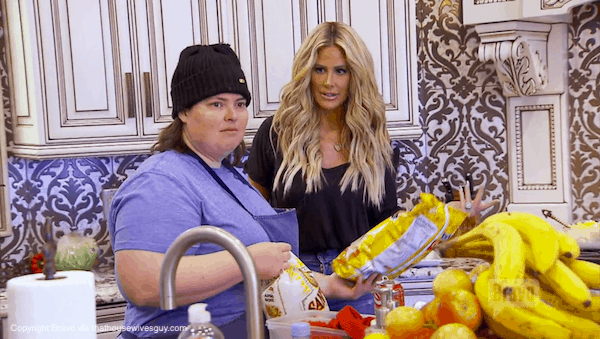 The hilarious and talented former Top Chef contestant and current chef to the Biermann family on Don’t Be Tardy , Tracey Bloom, is recovering after an intense surgery last week.

Tracey found out that she needed to have a cyst on her ovary removed via invasive surgery after experiencing severe pain a few months back. Having to deal with that physical pain had to be a challenge in and of itself ; but dealing with that and dealing with Kim Zolciak  and her baseball team of hungry kids? Wow. If I were Tracey, I probably would have faked multiple surgeries by now just to get a break from the crazy Biermann household. 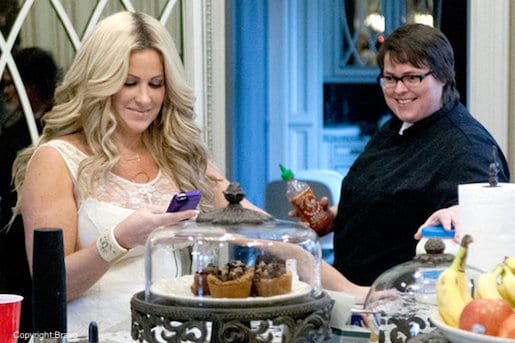 Of course, the family was nothing but supportive for their chef whom they consider another member of the family. Prior to the surgery, Kim posted on social media asking fans to pray for Tracey’s health and quick recovery. At one point before the chef was diagnosed, the family was even afraid she might have had cancer. Tracey discussed her health scare on an emotional episode of Kim’s podcast. She  talked about having to go to the ER in the middle of the night from intense pain.

Luckily, all went well with the procedure. Tracey and Kim both posted on social media last week letting fans know the surgery was a success. Tracey posted while still high from the drugs she was administered, uploading a selfie which calls for a new Corey Hart song, “Sunglasses at Surgery.” Doctors switched the blade on the girl in shades, and now she’s quickly recovering. 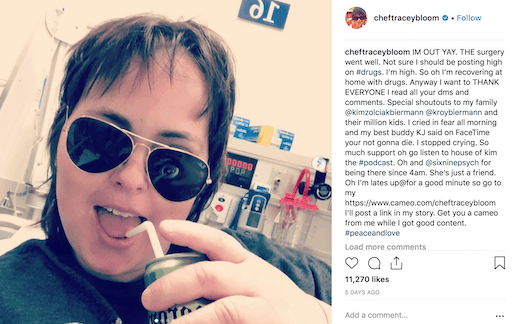 However, she admits to being understandably scared and nervous in the days leading up to her hospital visit. All of the Biermanns showed their love and support for the chef, but one of Kim’s sons in particular helped to calm down both Tracey and Kim. KJ facetimed Tracey before the procedure and reassured her everything would be okay and that she “wouldn’t die.” I tend to trust anyone who says what I want to hear, but hearing it from a sweet kid I’m sure made it a lot better.

Hopefully, Tracey will get well soon so she can go back to cooking and pouring Kim her signature red solo cup of wine.