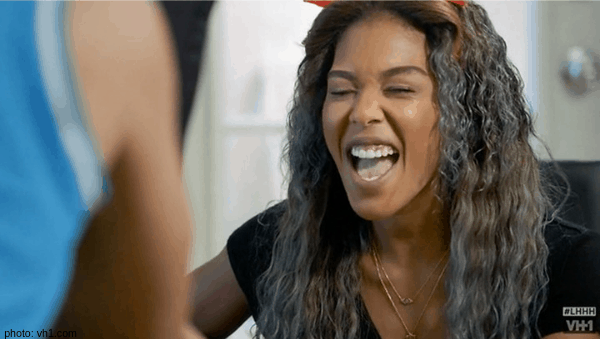 Coleman is not allowed within 100 yards of the reality star as it is alleged that he was harassing both Moniece and her nine-year-old son.

The judge also granted Moniece sole possession of a Great Dane that Coleman allegedly tried to claim ownership of.

Coleman has claimed that Moniece assaulted him, and he also filed a restraining order which was not extended as the judge decided that Moniece was the one being threatened.

Next time, Moniece might want to do an enhanced background check.  Thankfully all ended well.

Bad Day for You

The rapper whose real name is Jamal Rashid claims that he is the victim of an extortion scheme.

The raid was part of an investigation that stems from 2016 into human and exotic animal trafficking claims.  Seized in the raid were numerous exotic animals along with firearms.

He was detained and released under suspicion for illegal wild life, sexual assault and trafficking. Not sure what’s going on but worth keeping an eye on as most entertainers are in a panic. All videos, images and pictures that don’t belong to me, they are property of their respected owners. Copyright Disclaimer Under Section 107 of the Copyright Act 1976, allowance is made for "fair use" for purposes such as criticism, comment, news reporting, teaching, scholarship, and research. Fair use is a use permitted by copyright statute that might otherwise be infringing. Non-profit, educational or personal use tips the balance in favor of fair use.

Four women have come forward alleging that they were assaulted by Mally Mall.  Sources close to the rapper are adamant that all interactions have been consensual, and they have text messages as well as voicemails to prove that at least one incident is part of an extortion scheme.

The rapper was detained and released following the raid, but the investigation is ongoing.  He has also not been arrested for the alleged sexual assaults.

When the Timing is Right.

La Negra shared that she met her boyfriend Emjay at a basketball game in 2017.  And here’s a little tea for you.  Emjay happens to be castmate Shay Johnson’s brother.

I foresee that being a good time next season.

Apparently, the couple did not meet through Shay and neither had any idea that they shared a mutual acquaintance.

Here’s a funny story This picture was taken in 2017 thats when we met I didn’t even know @iamshayjohnson nonetheless that they were family and I only sat next to him because they were no more seats available 😂 lol that was just pure coincidence and a paparazzi took a picture of me but I always say that God has a funny way of working.. it’s all about timing. I know you guys have been trying to figure out who he is and check him out on Instagram so here y’all go.. @officialemjay and no this is not a @loveandhiphop storyline.

Amara wants everyone to know that her relationship is not for a story-line and that she is living her best life.

It remains unclear how long the couple has been together, but no worries Shay has given her stamp of approval.

Good luck to Amara.  Hopefully all the other women on her show will stop accusing her of trying to steal their men.

Will these new plot twists be used as story-lines?  Let me know in the comments below.

Be the first to leave Comments for LHH Round-Up: Catching Cases and Feelings