Is Carole speaking out of turn? 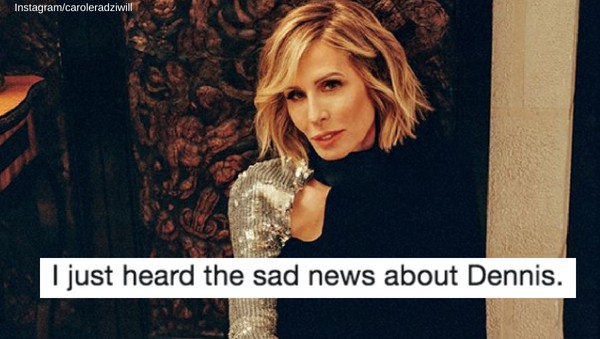 As the internet is still processing the shocking death of Bethenny Frankel’s on-again/off-again boyfriend, Dennis Shields, the Real Housewives of New York star has yet to make a statement publicly about the tragic incident. However, that hasn’t stopped her former BFF, Carole Radziwill from speaking out about the event, much to the chagrin of Bravo fans everywhere who are slamming Radziwill for talking out of turn.

Early today, news broke that 51-year-old, Dennis Shields had died from an alleged overdose of prescription pills. At 9 a.m. this morning, Shield’s asked his assistant to Narcan – an emergency medication which reverses the effects of an narcotic overdose – but according to reports the life saving spray unfortunately failed to revive Shields and he shortly died.

While Bethenny, with whom Shields was only recently in a relationship, has yet to publicly speak out about the death. E! News is reporting that a source told them that Frankel is “heartbroken” over Shield’s death.

“This is really bad,” the source said. “It’s dreadful. She’s known him for over 20 years. She’s heartbroken.” And while B has decided to keep quiet for the moment about the tragic event, her former BFF Carole took to twitter earlier this afternoon to send her condolences to Shield’s friends and family.

I just heard the sad news about Dennis. He was a good man. My condolences to all his family and friends. So tragic.

But people online noticed that there was one person suspiciously missing from Carole’s well-wishes.

Really!? Can’t even mention @Bethenny by name even here. Shows me just what kind of person you are.

“[It] shows how awful Carole is…in my opinion,” wrote a fan on the social media site.

I was thinking the same thing ..what a back handed condolence..shows just how awful carol is..in my opinion

And many just felt that Carole should keep quiet until Bethenny has said her peace.

Though Carole did have her supporters. This user felt that Carole would have gotten criticized even if she had mentioned B.

And another person thought that Carole’s tweet was completely appropriate.

Carole is sending condolences to the immediate family as she should!

We guess we won’t know the real deal until Bethenny lets us know how she feels about it.

Do you think Carole was rude to not include Bethenny in her well-wishes?