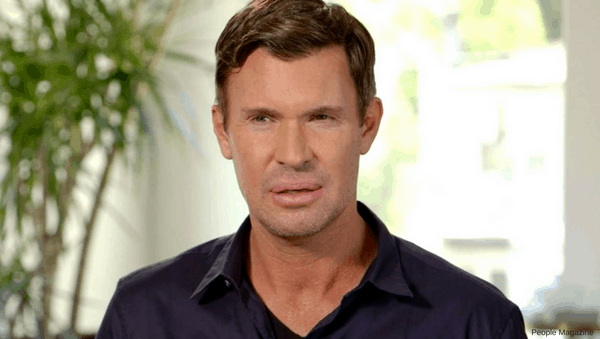 It looks like someone at Bravo has some explaining to do! On Tuesday, Alexandra Trent, the surrogate for Flipping Out star Jeff Lewis and his partner Gage Edwards, filed a lawsuit against Bravo, claiming that she never gave Bravo permission to film her during childbirth. But wait, it gets worse. According to Trent, she was also deeply humiliated by the embarrassing comments that Lewis made about her body on camera!

According to Variety, Trent claims that the network filmed her vagina without her permission and that she was mortified by Jeff’s lewd comments about her lady bits.

“If I was a surrogate, and I had known there was going to be an audience, I probably would have waxed,” he says on the show. “And that was the shocking part for Gage. I don’t think Gage had ever seen a vagina, let alone one that big.”

What a thing to say about the woman who is giving birth to your child!

In her suit, Trent says that she met Lewis and Edwards in 2015 after answering a classified ad. She was not aware of the Lewis’ television show and had no desire to be on TV. She claims that she only consented to having her ultrasounds filmed to promote surrogacy, but the network took advantage of her trust.

Trent says that she told Bravo that they could not film her while giving birth, but that footage was taken without her permission from behind a curtain. She claims that neither herself, nor her doctor, had any idea that there were cameras rolling while she giving birth.

She also claims that she wasn’t even aware of her big scene until well after the episode aired. Trent says she has asked Bravo numerous times to have the clips removed from their website, but they never responded to her efforts.

Trent is suing Bravo for unlawful recording, invasion of privacy, and fraud. And this line from her lawsuit seems to sum it all up quite nicely, “In their quest for ratings, Defendants have deeply damaged Trent and have caused incredible anguish, self-loathing, contempt and depression.”

Again, what a thing to do to someone who works for you.

Who do you think is at fault for this, Bravo or Jeff Lewis? Let us know in the comments!

Be the first to leave Comments for Bravo Sued For Filming Jeff Lewis’ Surrogate Give Birth!