Look at all these opinions that nobody asked for. 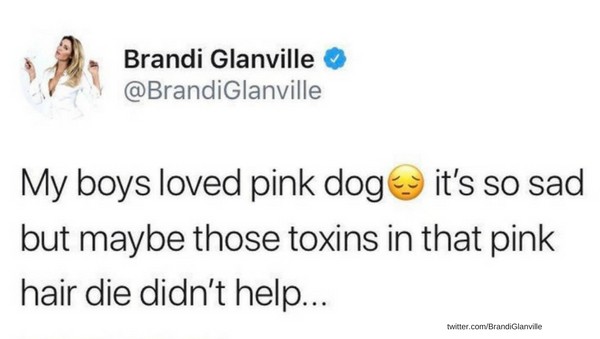 Brandi Glanville has really managed to step in it and this time she’s squaring up against the Grand Dame of The Real Housewives of Beverly Hills, Lisa Vanderpump. The 45-year-old Celebrity Big Brother cast member sent out some pretty inflammatory tweets this morning following last night’s episode of RHOBH and fans are not amused. The actress even insinuated that perhaps Pink Dog’s death wasn’t so incidental… 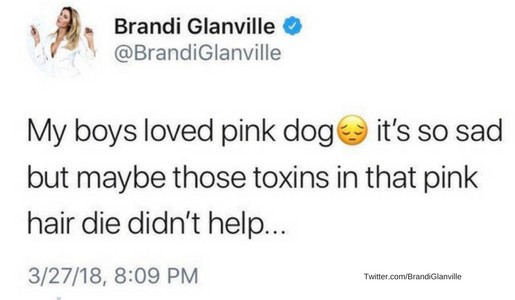 The tweet, which has since been deleted, was sent out this morning, presumably after watching last night’s episode of RHOBH which showed Ken and Lisa still mourning over their two beloved pooches’ deaths.  “My boys loved pink dog,” Brandi writes, “Maybe those toxins in that pink hair die [sic] didn’t help.” Oh, Brandi….

The woman does not know when to keep her mouth shut. Lisa Vanderpump saw the misguided tweet and shot back in the thread, “No toxins…never would,” and then angrily adds, “Now go back to the hole where you came from.” 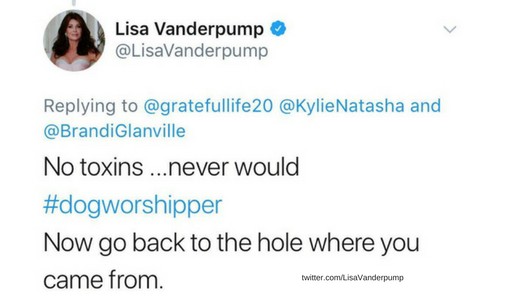 One would think that getting bodied like that would teach Brandi to keep her mouth shut and let Lisa Vanderpump mourn in peace, but no, now she has to say something about Nannygate…

Never once did LVC mention Nanny K to me in the many years of our friendship. Ummm the pizza place that went under Kyle told me about…

For some reason Brandi felt the need to clarify whether she did or did not know about Nanny Kay. She writes, “Never once did LVC (Lisa VanderCunt) mention Nanny K to me […] the pizza place that went under Kyle told me about…”

Got it, both Lisa and Kyle are liars or casually forget what they tell people. Moving on. Of course, this wouldn’t be Real Housewives drama if their fans didn’t have something to say about it. 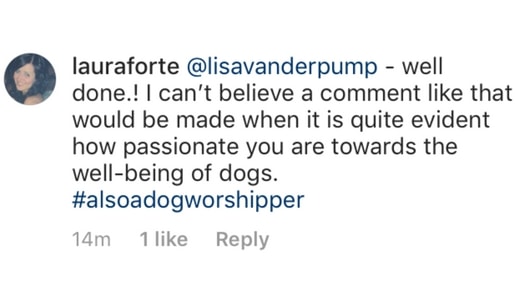 One fan said even said that Brandi was “a horrible human” with “zero class.” 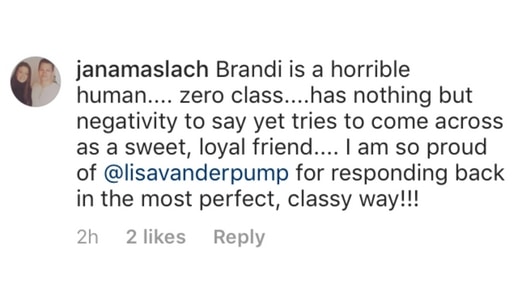 And this fan did not mince words. 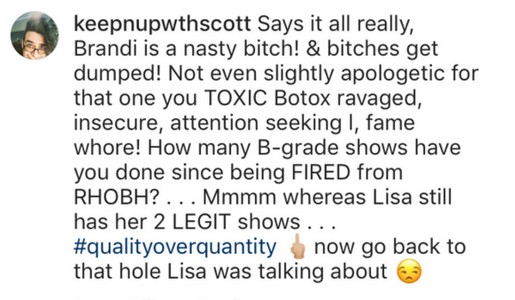 “Brandi is a nasty b**ch!” this Instagram user writes, “now go back to that hole Lisa was talking about.”

Okay, so maybe things have gotten a little out of hand. But we have to admit that Brandi’s attempts to stay relevant are not a good look on her and she should have just kept her mouth shut. As we all know by now, you don’t mess with the Queen of Beverly Hills.

Tell us if how you feel about Brandi’s tweets in the comments!