Home > Buzz The Bachelorette Recap: A Lumberjack For Every Lumberjill

The Bachelorette Recap: A Lumberjack For Every Lumberjill

It isn't easy being the Bachelorette. 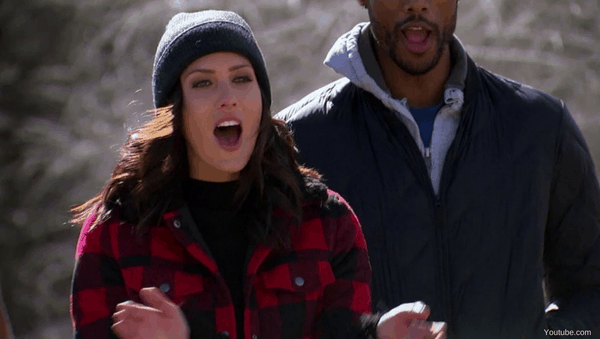 What happens when we start to see the cracks behind The Bachelorette’s facade? Just ask Jean Blanc, who face-planted this episode because he forced his hand in the game, or perhaps he was overly confident in his connection to Becca. Either way, this episode was a painful reminder that while yes, The Bachelorette is about finding love, it’s also a game. One that can be lost when authenticity isn’t found. But we’ll get to the fall of Jean Blanc in a second.

David’s back and his feud with Jordan is just as strong as ever. While the men all seem to gather around David and congratulate him on making it back to the mansion, we hear Jordan once again tell us that he talks to God and when he does this sometimes bad things happen to people who cross him…..Okay.

Was it not incredibly awkward to see Becca and Jordan not only have a conversation together, but then kiss? Gold booty shorts or not, Becca is not into Jordan and I predict that he has another episode or two before he finally gets the axe.

Becca welcomes David back into the fray and quickly gives him a rose so that he can go up to his room and recover. It’s a nice gesture, but given his consistent antagonism of Jordan the chances of David going all the way keeps plummeting every episode.

What is more upsetting is that Colton is getting into the Jordan/David beef. Apropos of nothing, Colton decides that Jordan is a clown and needs to be told off on Becca’s behalf. Colton obviously realized that his screen time this episode was running low.

We finally get the rose ceremony that we missed last week due to David’s fall. Mike goes home (blonde manbun), but his exit sort of goes unnoticed.

Then Becca makes an announcement that the group will be traveling to Park City, Utah. The land of… snow? Anyway, Becca and Garrett (boo) have a one-on-one, and if Garrett hadn’t shown his true colors I would be all for this romance. Clearly Garrett and Becca seem to have a genuine connection and after a slide down the old bobsled (not a euphemism), Becca gives Garrett a date rose.

Perhaps I could have taken more enjoyment out of Lincoln revealing that he is a flat earther, if the story that he has been accused of assault hadn’t surfaced this week….perhaps.

The guys have a lumberjack date, where the surprising winner was Venmo John. Becca, I feel like we’ve spoken about this before, but lock down John, creator of Venmo, asap. He has brains and can chop a block of wood. He is the perfect man for you. John wins both an incredibly huge trophy and the chance for a one-on-one with Becca. I’m counting on you John to seal the deal.

Jean Blanc, who truly used the gimmick of being a colongoisseur to it’s last drop, brings Becca a perfume that he made with “one of the world’s top fragrance makers” and then tries to seal the deal with a kiss. The whole thing is very awkward. Then Jean makes his fatal  mistake, he tells Becca that he’s falling in love with her wayyy to early in the season. Confessing that you’re falling in love with the Bachelor/Bachelorette IS a way to gain points in this game, but it’s usually reserved for the final four, or at least someone who is a clear frontrunner. Becca is understandably creeped out. Imagine someone telling you that they’re falling in love with you, like the third time you talk to them.

Becca decides that this Jean Blanc thing has gone far enough and decides that it’s time for Jean Blanc to go home. She asks him if he wants the perfume he made her back, and Jean Blanc says that because Becca didn’t respond the way that he hoped she would, that he didn’t really mean what he said. He thought that’s what she would want to hear (and grossly overestimated how far along he was in the game). Becca is P**SED (rightfully so) over Jean Blanc admitting that he was an insincere a**hole, and walks back into the mansion like demon out of Hell.

She tells the guys that if anyone else if not here for the right reasons that they can leave right now. She already dealt with Arie professing his love to her and then taking it back and now that Jean Blanc has also crossed over to jerk territory, Becca is over the night and over the men. She demands that the next night they skip the cocktail party and instead go straight to the rose ceremony.

The next morning, Wills has the tough job of going on a date with Becca after the debacle that was Jean Blanc. She tells us that she doesn’t know where her head is at and seems a little over the whole Bachelorette process. But the producers were smart pairing Becca with Wills for the day. Wills is not a drama king and while I definitely don’t think there is a love match between the two, Wills isn’t going to try and mess around with Becca’s emotions on their date.

Much to David and Colton’s chagrin, Jordan is given a rose at the rose ceremony, though given the previews for next week I assume we are going to have an awkward two-on-one between Becca, David, and Jordan.

Did Jean Blanc push his luck? Let us know what you think in the comments!

Be the first to leave Comments for The Bachelorette Recap: A Lumberjack For Every Lumberjill