Ashley Jacobs Explains Her Decision to Leave 'Southern Charm,' Gets Shaded To Filth By Patrica Altschul

And this is why Pat is Queen. 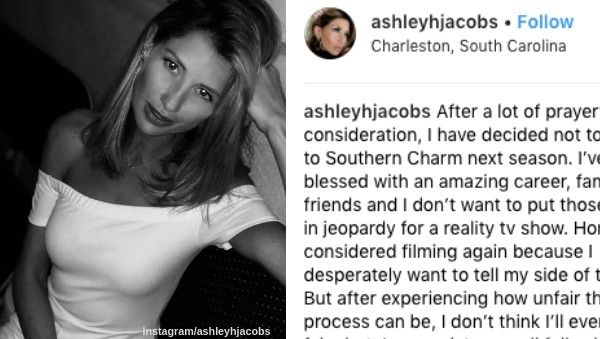 Well, it looks our long national crises is over. Ashley Jacobs will NOT be returning to Southern Charm next season.

The *ahem* former reality villain took to Instagram to deliver the news that she will not be joining the cast on season six of the hit Bravo franchise. But as some have pointed out under her announcement post, the reasons Ashley have given for the break have been conflicting.

In a post on written on November 6th, Ashley said that she decided to leave the show, “after a lot of prayerful consideration.”

“I’ve been blessed with an amazing career, family, & friends and I don’t want to put those things in jeopardy for a reality tv show,” she continued. The hospice nurse added that she had originally considered filming again because “I desperately want to tell my side of the story.”

“But after experiencing how unfair the editing process can be, I don’t think I’ll ever have a fair shot.”

After a lot of prayerful consideration, I have decided not to return to Southern Charm next season. I’ve been blessed with an amazing career, family, & friends and I don’t want to put those things in jeopardy for a reality tv show. Honestly I considered filming again because I desperately want to tell my side of the story. But after experiencing how unfair the editing process can be, I don’t think I’ll ever have a fair shot. I appreciate you all following me throughout this journey. Photo by: @kdimeg_photo

But of course, she wrote this on the internet and one observant fan was not going to let this answer fly without pointing out that Ashley had completely changed her story.

“Wait, in a comment on your last post you said it was because they weren’t offering you enough $$. Which is it?” wrote user Ksouthern321.

In a post written on October 13th, Ashley had addressed a fan in the comments who said she would be sad to see Ashley go if she didn’t get asked back to Southern Charm.

To which Ashley responded:

“I was asked back but eventually declined because what Bravo wanted to compensate me with was only a tiny fraction of what everyone else is making. Especially in light of all the hate I have incurred this past year… it was an easy decision for me to walk away. I find my job as a nurse more rewarding. All that drama that comes with reality tv I find unhealthy. I’m just not cut out for reality TV. With that said, I wish everyone on the show well!!”

But to be honest, both of Ashley’s answers have us feeling a little 🤔🤔🤔. 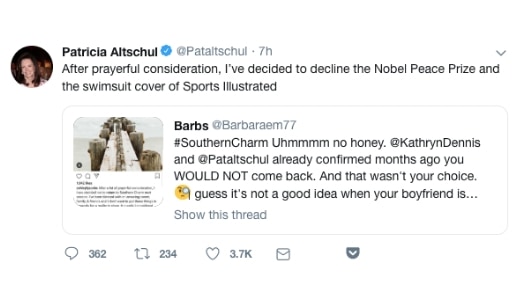 Maybe we’ll never know the real reason why Ashley won’t be returning, but most likely we all probably do.

Who will be the next drama Queen/King on Southern Charm?

Be the first to leave Comments for Ashley Jacobs Explains Her Decision to Leave ‘Southern Charm,’ Gets Shaded To Filth By Patrica Altschul

Bravoholics Respond To News That RHONY Will Not Have A Reunion

"So we could figure out how to do a reunion at the height of the pandemic but y’all can’t figure this out now?"

"It is hard to go through what she went through."

"Things take a long time to come out — but everybody in that industry knew about it."

Will Michelle Young's Former Suitor Clayton Echard Be The Next Bachelor?

The former Seattle Seahawk “impressed everyone on set.”

CATFISHES IN THE CIRCLE SEASON 3 WITH LEE/RIVER

Breaking down the Circle Season 3 with alumni Lee/River!

"TV land is really into like sparkly over-the-top characters and I was nailing it."

This is on the heels of the revelation that Kanye was unfaithful during their marriage.