Andy Cohen And Your Favorite Bravolebrities At The NYC Pride Parade

The only thing to upstage the Bravo float was the RHONY fight in the car before the event! 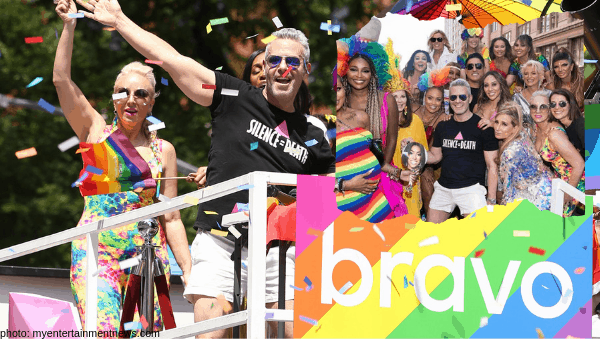 Bravo‘s Daddy, Andy Cohen, and his mixed-bag of Bravolebrities celebrated World Pride and the 50th anniversary of the Stonewall Riots – which started the gay rights movement, in NYC. This was the biggest gathering of Bravolebrities since Andy’s baby shower for his real-life baby, Benjamin Allen…not just for middle-aged drunks, but I should speak for myself.

Housewives in attendance were NeNe Leakes, Cynthia Bailey, Eva Marcille, and Marlo Hampton from Real Housewives of Atlanta. (In case you were wondering, Eva the Diva and her baby bump won best dressed for me!)

#worldpride2019 with @bravotv so I showed up as the #peacock 😂😜🏳️‍🌈🏳️‍🌈🏳️‍🌈 .. #lovewins #lgbtq #lgbt #pride #bravotv #nbcout #rhod #loveislove #leeannelocken

Vanderpump Rules cast member, Billie Lee, made lemonade of her lemons from not being with her VPR co-stars at Jax Taylor and Brittany Cartwright‘s wedding, and joined Andy et al for NYC’s Pride Parade. Billie Lee spent some quality time with Below Deck: Mediterranean‘s Captain Sandy Yawn, Patricia Altschul from Southern Charm, as well as Watch What Happens Live‘s mascot, the Gay Shark.

Leave it to the RHONY ladies to deliver above and beyond any other franchise: Dorinda Medley from Real Housewives of New York City, was joined by the parade’s MVPs, Tinsley Mortimer, and Sonja Morgan.

Another deleted scene from this season of RHONY….JK this is from today 👏🏼👏🏼👏🏼 thank the lord Kelly Dodd captured yet another epic RHONY moment. #RHONY #happypride #morganletters #youdonttouchthemorganletters #rhoc #loveislove #worldpridenyc #andycohen #bravotv

Sonja is still yelling at Tinsley for not saying ‘thank you’ for staying at the townhouse while Tinsley yells that she was being “abused mentally and physically by a man”. Sonja, being Sonja screamed back “IT’S NOT ABOUT YOU!”

Kelly Dodd wasn’t the only one doing God’s work – the amazing folks at @facereality on Instagram posted part two of the fight an hour later.

LeeAnne made it crystal clear that she had enough of the fighting, while Reza coached the RHONY gals in getting their sh*t together before leaving the car.

THIS is why I love Bravo.

Whose side are you on? Leave Team Sonja or Team Tinsley in the comments!