Should Tre tell Audriana the truth? 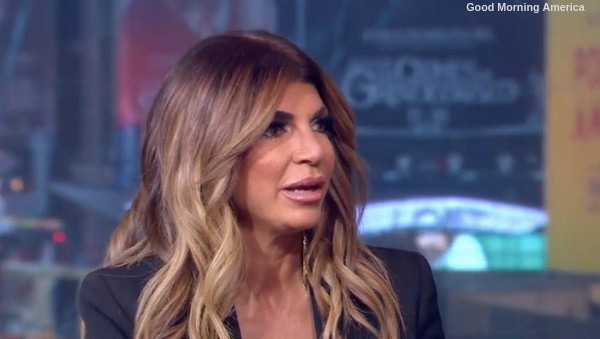 Teresa Giudice from the Real Housewives of New Jersey is sharing more information about her husband Joe Giudice’s impending deportation and the real toll that the news has taken on their four daughters.

In an interview with Good Morning America on November 6th, Teresa joined host Michael Strahan and admitted that her husband’s recent sentence to be deported back Italy has been “heartbreaking” for her family.

“The girls are really upset. You know, it’s hard for them … Adults can handle anything. It’s hard for children to go through this. They’re asking themselves, ‘Why is this happening to me?'” she explained.

Each Teresa’s daughters has had their own reaction to the devastating news, though the reality mom said that she’d received a lot of strength from her oldest daughter Gia, age 17. ‘”She’s like the rock of her sisters, she’s helping me explain things to them,” Teresa said.

This is one of my favorite pictures of me and my dad❤️ my father is no threat to society he is one of the most warm hearted people I know, he would never harm a soul. He puts everyone else before himself. I know who my father is and I think many of you do too. My father did his time and learned from his mistakes. Isn’t being in there supposed to make you realize your mistakes so you can become a better person? And that’s exactly what my father did. He hasn’t felt or looked this good since he was in his 30’s. We have so many plans to do as a family when he gets out. I need my father to be here. My father belongs with us and his entire family. My father came into this country when he was one years old, the United States is the only country he knows, spread the word #bringjoehome

Though the mom admitted that she has yet to tell her 9-year-old Audriana about her dad’s prison sentence.  “Like, we keep saying that he’s at work but, you know, I’m sure [Audriana] hears when he calls, it says, ‘calling from a federal prison.’”

I never thought I would be in this position,” Teresa continued. “We’ve been through a lot. I’ve gone through ups and downs, like being angry — but listen, I have to stay strong. I have four beautiful daughters that, you know, they need their mommy.”

My dad , who is the best dad in the world, needs to come home. We aren’t done fighting dad. I can’t believe this is happening. I can’t imagine another day without you. We are gonna do everything we can to fight this daddy!! I love you with all my heart buddy❤️❤️❤️❤️❤️#heartbroken💔😢

When Strahan asked the Bravo performer why her husband had never applied for United States Citizenship before, she told him, “I guess that’s something you would have to ask his parents. You know, his dad became an American citizen before he was 18. And then his mom did it after he was 18, and then the laws changed … I don’t know why they never made him an American citizen.”

And Teresa even clapped back against people who criticize her for being on reality TV while her family goes through such personal chaos.

“I mean, I’ve been doing this now almost, what, ten years?” the reality star said. “This is how I make a living. I have four daughters to raise, and I don’t understand why people would criticize me for that. I mean, I’m doing it all by myself … If I don’t work, nobody — how are they going to live?”

According to Us Weekly, on October 10th, a judge sentenced Joe to be deported back to his birth country, Italy. After serving a 41-month sentence for 41 counts of fraud, including mail, wire and bankruptcy fraud and failing to pay $200, 000 in taxes.  Joe’s prison sentence will be over in March, but Teresa shared that they are hoping to appeal the decision and keep her husband in the country.

She said that for now Joe is “being very positive” about the appeal and added that they’re taking things “one day at a time.”

Should Teresa tell Audriana that her father’s going to get deported? Sound off in the comments!