Was Jihoon's proposal the best thing we've ever seen in our lives? 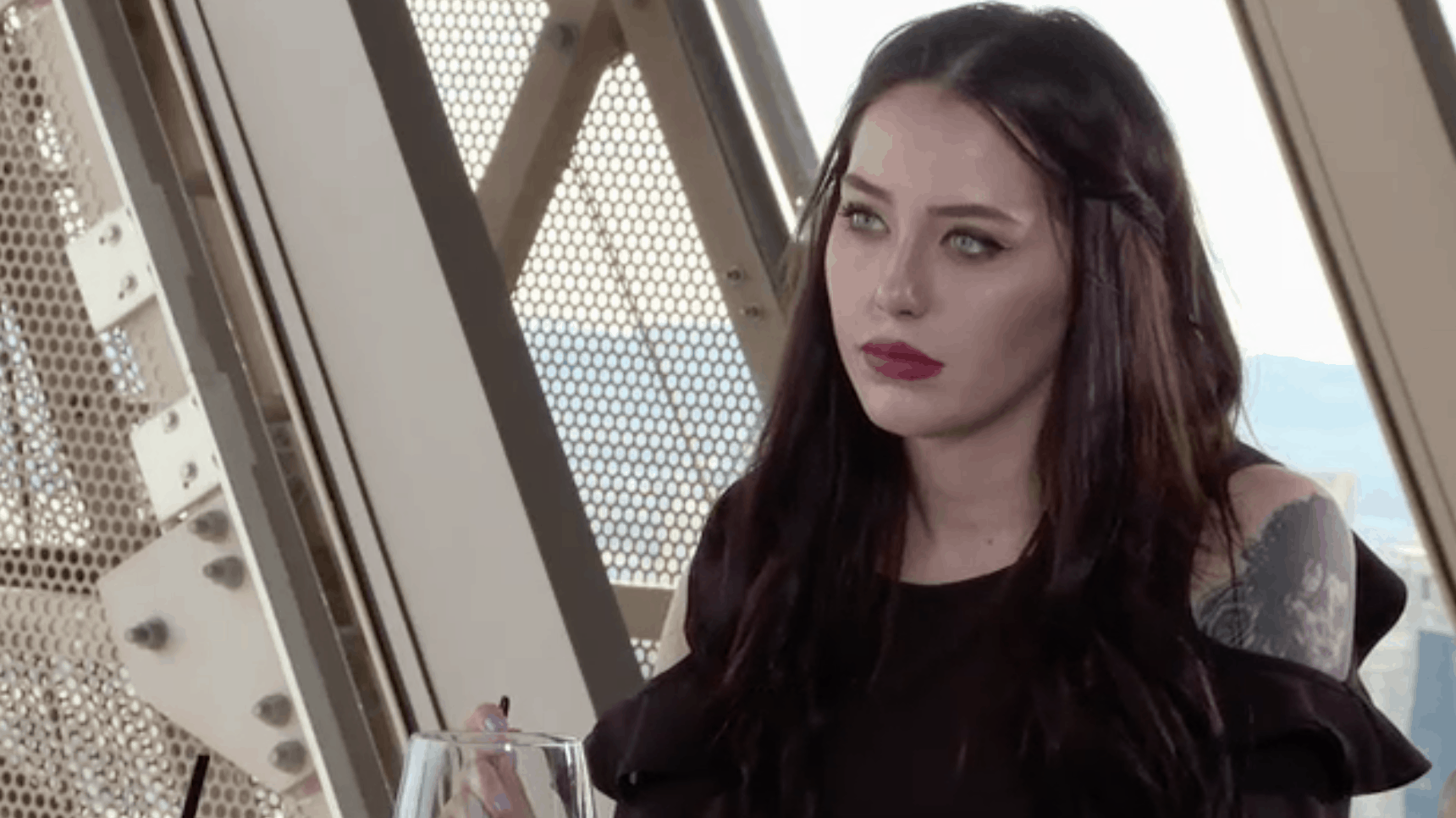 I am now fully invested in the outcome of Deavan & Jihoon’s love story, if only to get more camera time with The Family Jihoon. Based on the events that unfolded this week, it looks like these crazy kids are going to make it! So, let’s start our 90 Day Fiance: The Other Way journey with them. 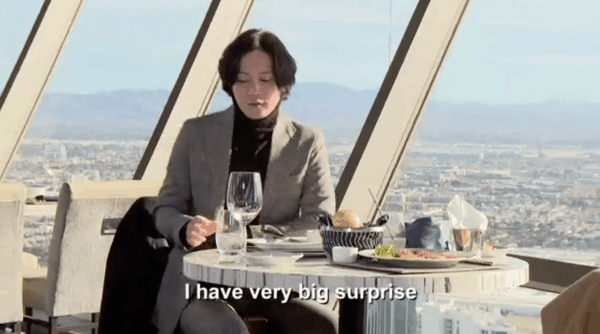 Jihoon proposes to Deavan atop the Stratosphere Casino in Vegas, and botches it so stupendously that we can’t help but love him more. After tossing an engagement ring in a champagne glass, sucking the glass dry, and breaking everything on the table, Jihoon finally puts the ring on Deavan’s finger and officially asks her to marry him. 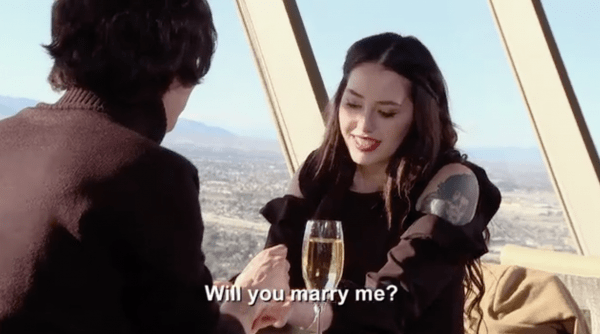 “Yes!” she laughs, not even flinching at the mayhem happening around them. This broad lives with Drascilla after all. #ShesSeenSomeThings

Jihoon later describes his efforts as “most very dumb propose!” But Deavan, who looks beautiful in their joint interview segment, is still thrilled with it. Awww. 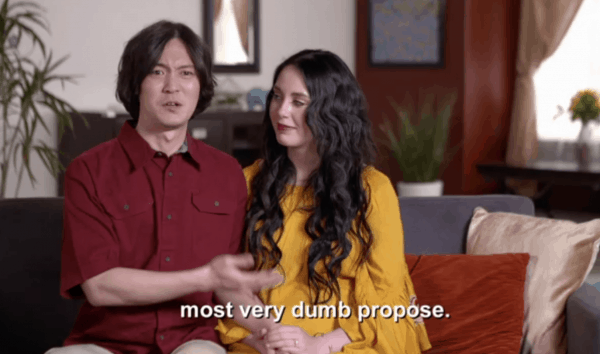 On their last day in Vegas, Jihoon promises to come back to see Deavan in time for the birth of their baby. She’s nervous that he won’t ge there in time, and also anxious about uprooting her entire life to move permanently to South Korea. (But, hey – It’s still not clear why Jihoon can’t move to Utah, right? What’s the deal? Hmm.) 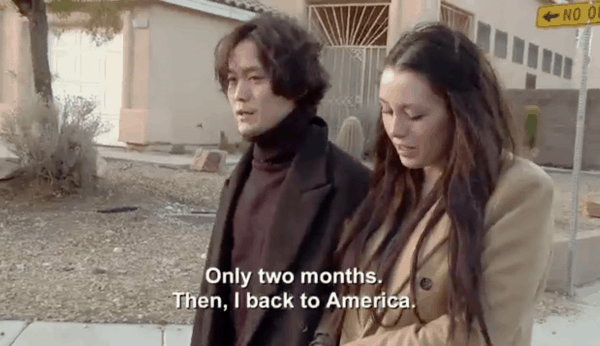 At least Mother & Father Jihoon have turned out to be lovely/hilarious humans, and they seem to be totally on board with Deavan now – despite the breakfast that nearly killed them and despite Drascilla crawling backwards up walls. Soon, they will all be together as a HAMILY! <endless heart emojis>

You know what a great conversation to have with an 8-year old is? Human trafficking! At least that’s what Ronald thinks as he drives Tiffany and Daniel through some sketchy areas of South Africa. “Safety is my main concern now,” says Tiffany, who’s become increasingly freaked out by the crime and poverty surrounding her. Meanwhile, Ronald explains to Daniel how people “steal little boys like you and sell them.” Ummm, PLEASE STFU NOW SIR. Poor, sweet Daniel looks like he’s going to puke. 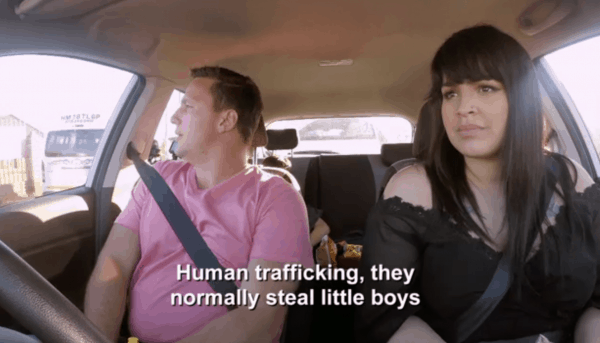 Ronald’s like, “Yes, there’s murders, bombings, theft. Still, it’s a nice place to live!” Daniel isn’t so sure he wants to stay in this strange place forever, though, even though Tiffany and Ronald pressure him to make this move all about staying together as a family. Just a thought, people, but maybe pump the breaks on “people like to steal little boys” language if you want this kid to feel all warm and fuzzy about living here. JAYZUS. 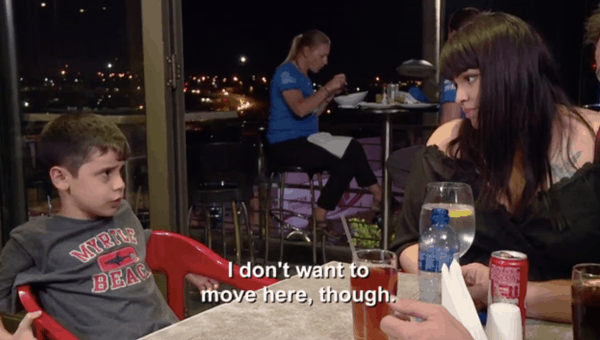 Later on, Tiffany confronts Ronald about the details of his multiple arrests. It seems like a good time to do this, considering they are getting married in, like, 3 days. Ronald fesses up that he was guilty for one of his crimes, but the rest were just misunderstandings. You know how it is – you borrow your mate’s jacket at the club and, whoops! You’re arrested for heroin, LSD, and other Paul Staehle-related crimes. 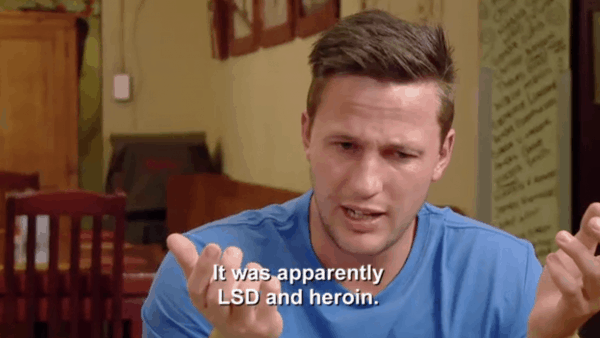 Now it’s Tiffany who looks like she’s going to puke. How can one person simply be in the wrong place at the wrong time so many times? The short answer is that THEY CANNOT. Ronald did a lot of sordid sh*t when he was deep into his addiction, and Tiffany is hitching her- and her son’s – wagon to a horse that already broke bad.

Since Jenny and Sumit were thrown a curveball at the marriage license office, the only thing left to do is come clean with Sumit’s parents. One problem: Sumit is still committed to the lie. As much as he assures Jenny that he will fight for her (and he does, when it comes to clapping back at a$$holes in restaurants!), he’s still sheepish when his father calls. 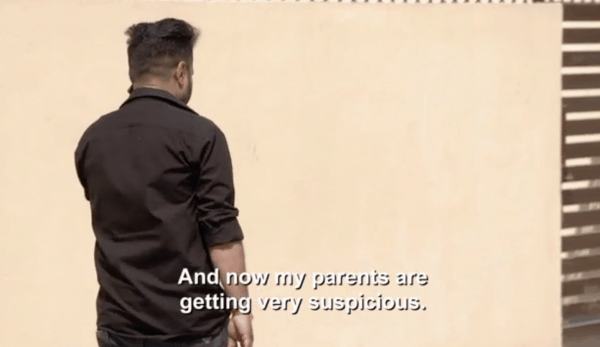 Outside of their apartment, Sumit tells his dad that he’ll come home soon, but NO, he will not send him the live location tracker from his phone! Damn. He’s on board with marrying Jenny, but not with getting stoned/murdered by the village for it. Not yet anyway. He is feeling very put off by everyone judging him for his choice in women, though. He’s all, I love Jenny and I chose her, so what the f**k, man? Why does anyone care if we marry? 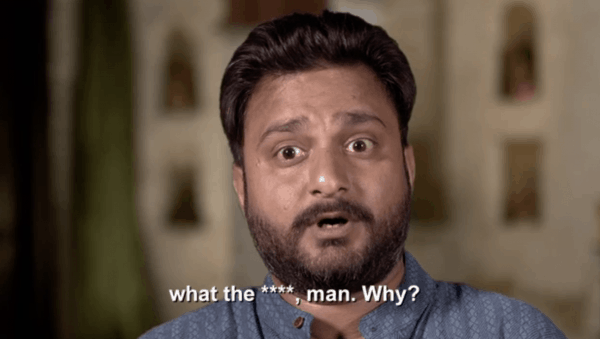 Sumit also wins points back this week by once again showing what a catch he is when he helps Jenny out with some…ahem…personal grooming matters. Yes, this is the man who will LITERALLY CLIP YOUR TOENAILS, ladies. Need I say more? #TotalPackage #CatfishMeBruh #MichaelJonesWho #IveGotACallousHereWithYourNameOnIt 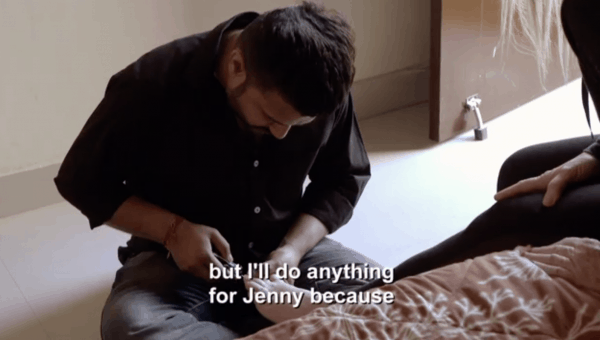 Yo, is Evelin just plain evil? Or is she playing it up for the cameras? Whatever the case may be, Corey has gotten himself into some deep sh*t with this one – $40K deep, to be precise. 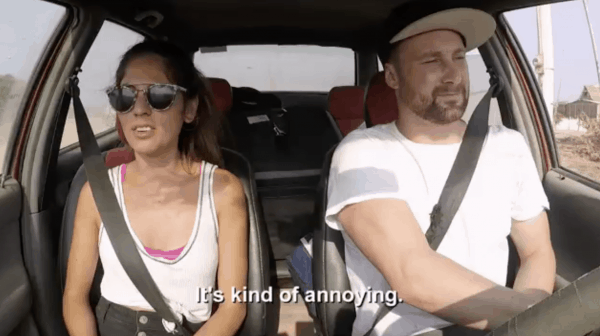 It’s finally time to head back to their beach-front apartment (ya know, the one that Corey BOUGHT?), so Corey and Evelin depart from grandma’s house in their very broken down car. Corey remembers his car back on the cult compound fondly, recalling making out with it just prior to letting it go. Now he drives around in this sh*tbox, which sounds like one of the angry dinosaurs in Jurassic Park, yet cost him a cool $7K. OH HELL NO. This vehicle is legitimately what my grandmother would official call a “jalopy.” 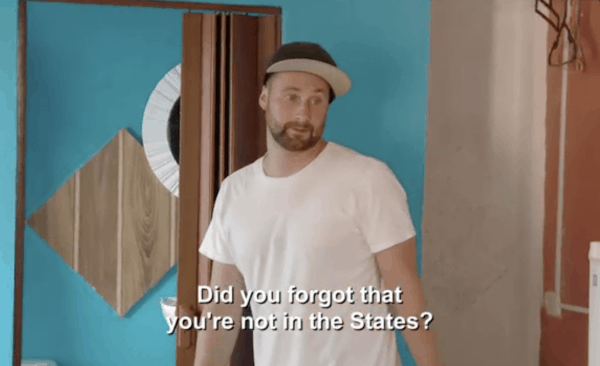 As they drive, Corey complains about the mosquitoes, which immediately sends Evelin over the edge. “Stop complaining! It’s annoying!” she barks. Back at the apartment, Corey is further depressed to find that their pots/pans/stove/entire life has been ruined by ocean air and decay. Apparently, there’s also no hot water. 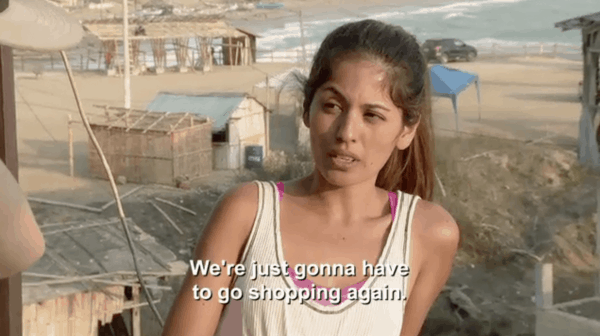 Evelin has no time for Corey complaining about the property HE BOUGHT WITH HIS OWN MONEY, and goads him endlessly about essentially being a “spoiled American.” She doesn’t give two sh*ts about their stuff being ruined, shrugging her shoulders and quipping that they’ll “just have to go shoppin again.” With. Corey’s. Money. 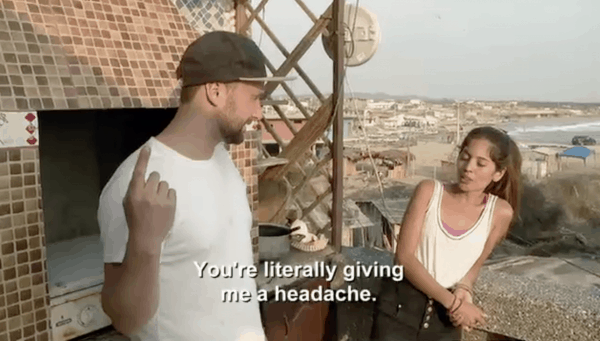 Because 1) Corey has no backbone or 2) Evelin has a truly magical vajajay, he just backs down from her verbal lashing, eventually apologizing to HER fort being so grumpy. WHAAAAAA? Okay, dude. This man needs an intervention. Then again, he’s the type of guy who thinks living on a compound and card tricks are a good time. So, maybe there’s no hope?

It was only a matter of time, but you guys – the POOP WATER has returned! And Paul is just as petrified as ever to see the rivers of brown water spurting forth from every faucet on the boat Karine & he take back to her hometown. Here he is, caught without his giant Hefty garbage bag swimsuit and penis sheath again. 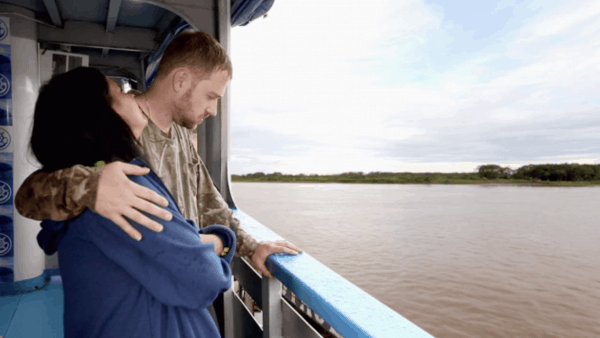 Before they make their way back home, Paul and Karine visit the OB/GYN to check on the baby. Karine is two months away from delivery, and everything is looking good, despite her having a possible bladder infection (ouch!). In a rare moment of tenderness, Paul lights up when they hear that they’re having a boy. Karine is, as usual, just exhausted and ready to be surrounded by loved ones who can actually speak her language. 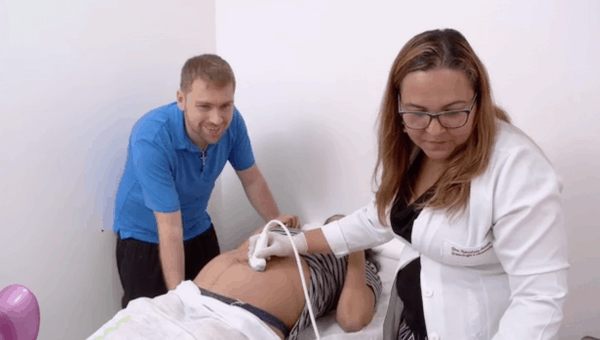 Because Sharp Entertainment loves us, we are treated to a montage of Paul doing many epic PAUL THINGS as he gets them situated on the boat. In no particular order are… 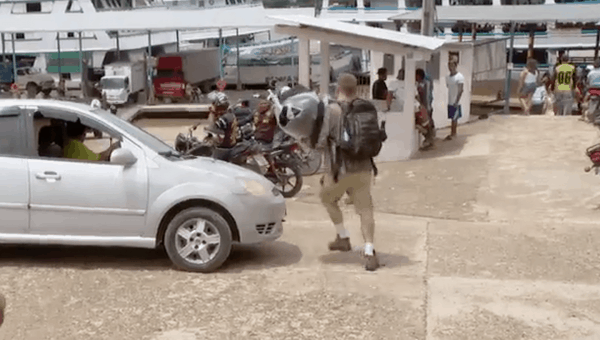 Paul unsuccessfully shoving a suitcase up a flight of stairs. 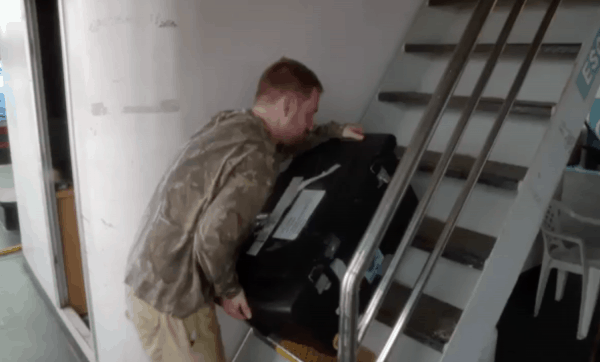 Paul unleashing a mosquito net so savagely, it practically knocks his pregnant wife out. 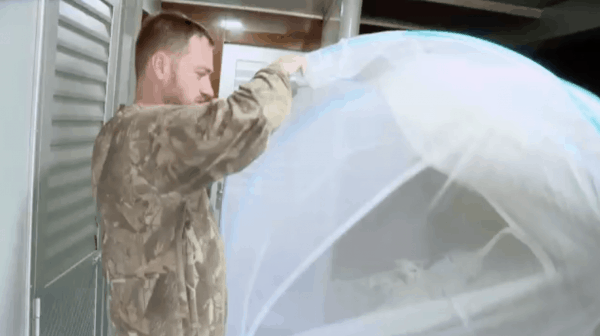 After enduring this comi-tragedy for what seems like hours, Karine’s response is as follows, which sums up all of our feelings about Paul at this juncture: 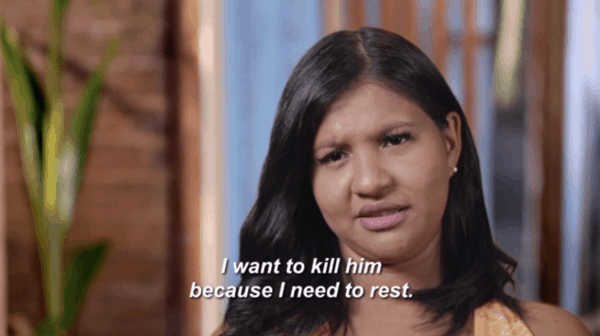 Oh, TLC! Thank you from the bottom of our little black hearts for this gem of a sequence. I can’t get enough of Paul trying to adult in the Amazon, and truly, need this to be a spinoff all on its own. Who cares about him possibly getting deported? Just film his narrow a$$ running into jungles and losing his goddamn mind on this Heart of Darkness barge EVERY day, ALL day.

Thoughts on Jihoon’s proposal? Do we need more footage of Paul on boats? Comment below!

Be the first to leave Comments for 90 Day Fiance The Other Way Recap: Ripped Apart