This 90 Day Fiance fan has news regarding Larissa appearing in front of a judge. 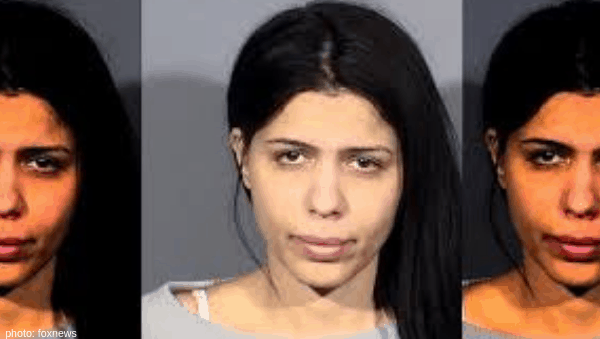 90 Day Fiance fans, is all this Larissa Dos Santos Lima and Colt Johnson drama filling the whole in your heart you thought could never be mended? Same here!

I live in Las Vegas and have been keeping a close eye on what’s happening with Larissa’s incarceration. My boots were on the ground!

According to Clark County records, Larissa was to be held for 12 hours with a $3,000 bail. She was admitted at 5 am Friday morning, so she should have been released at 5 pm. 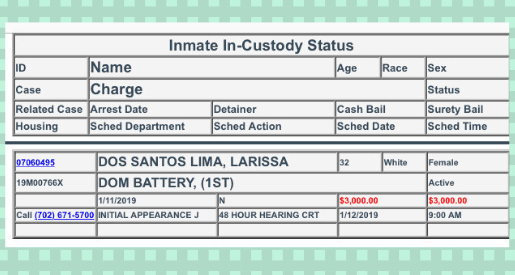 I went to the Clark County Detention Center to try to get an interview with Larissa. I spoke with staff members at the Detention Center who said that the hold is 12-24 hours and they were running very, very behind.

Still motivated to meet Larissa and share her story, I confirmed exactly where the Brazilian would be released, so I was ready (though no one could confirm what time it would happen.) 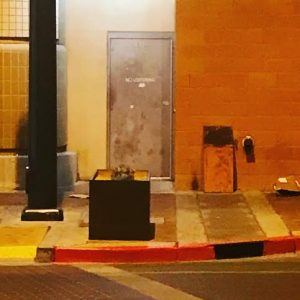 As several inmates were released, I asked them about the status of Colt’s wife. None of them were able to give me any dirt on her, specifically. One lady did tell me how far behind the Detention Center was; she was expected to be released Wednesday evening and was just getting out when I spoke with her at 7 pm Friday night. 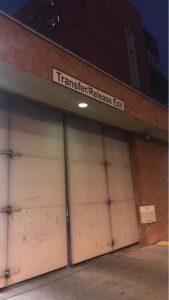 Thankfully for the newly released, there is help nearby! 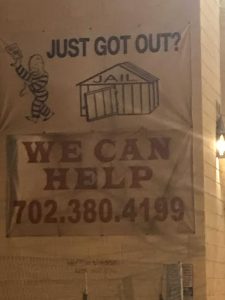 I hung out for a while longer still feeling hopeful, but decided to leave when I saw on Larissa’s Instagram page (that her friend Carmen allegedly has taken over while Larissa is unreachable) that Carmen went to bail Larissa out for $800. Just a reminder that the legal document said the bail was $3,000. 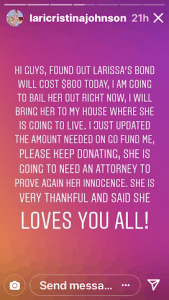 I decided to go home and further my investigation from the comfort of my home. I found some shady information online that didn’t add up. Let’s start with the Go Fund Me. It originally started at $5,000. Larissa’s Instagram page provided updates toward the goal, but then changed the goal to $3,000 when it looked like the goal was almost met. Weird, especially since Larissa IG page said the bail was $800. I asked one of the employees at the Justice Center about the discrepancy in the bail out amount. He wasn’t positive for this exact case, but typically what the court report says goes!

Again, on the Clark County website, I learned that Larissa was expected to meet with the Judge at 9 am this morning. I did what any normal person would do… I reached out to all of my contacts and got some dirt. I had multiple sources direct me to the exact spot where the Brazilian firecracker was expected to be.

So, I went to the Regional Justice Center this morning to get the scoop! I gained access to the inside the court room and was able to ask the court personnel for answers. 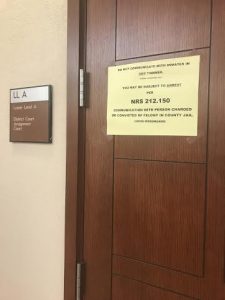 What I learned: Larissa WAS released from the Clark County Detention Center sometime between last night and this morning at 9 am. The staff was unsure exactly who bailed her out.

Larissa’s hearing was postponed. She will be appearing in front of Las Vegas’ Honorable Judge Sullivan on 2/12/19 in room 7C. Yes, I will be there to keep you in the loop!

What are your feelings on Larissa and Colt’s insane start to 2019? Whose side are you on? Respond with #TeamLarissa or #TeamColt in the comment section. Don’t forget to tell me why!

Be the first to leave Comments for 90 Day Fiance: A Larissa Dos Santos Lima Update from the Detention Center