Home > Buzz Hostess with the Least-est: The 4 Things Dorinda Did Wrong at her Halloween Party

Hostess with the Least-est: The 4 Things Dorinda Did Wrong at her Halloween Party

Dorinda's Halloween party proved she is no longer the hostess with the mostest. 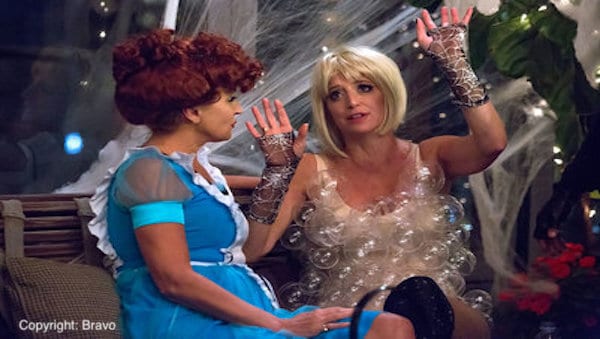 The season premiere of RHONY last week featured Dorinda’s extravagant Halloween party. But for the self-proclaimed “hostess with the mostest”, the scariest thing about the night was her poor manners.  Here are the top four faux pas Dorinda made at her party.

1. She got white girl wasted.

Now, this in and of itself is not a problem. In fact, drunk Dorinda is often the most entertaining. It’s her party; she’ll get drunk if she wants to. I mean, the stress alone of paying someone to plan your party and make your outfit is reason enough to drink (*sarcastic eye-roll*). But seriously, let her drink and have fun, who cares? The issue is she wasn’t making sure everyone else was having fun. Her personality quickly became a lot less bubbly than her dress.

2. She left while the party was still going on.

Who leaves their own party early?! Usually the hostess stays until the end to make sure everyone had a good time and leaves safely. However, Dorinda’s early departure may have been for the best considering how many bubbles she was losing with each glass of bubbly. Thankfully, a member of the SWAT team escorted her out before she could really embarrass herself.

As soon as Ramona walked in, the women excitedly called out to welcome her. But once Dorinda noticed Sonja, she just started ranting about her. Even worse, she got mad at Sonja for not walking over to the ladies, claiming the guest should greet the host. While that is certainly polite, it’s usually the other way around. It’s the hostess’ job to greet guests and make them feel welcome. Obviously Sonja felt out of the loop and felt uncomfortable walking over to all of the ladies at once. Dorinda’s behavior was just catty, literally. Dorinda and Sonja were like two cats staring each other down, wondering who was going to make the first move.

4. She gossiped about her guests.

Not only did she make fun of Sonja, but she also mimicked the sweetheart Rocco, who has never done anything to Dorinda (Frenchie was cute, but I’m #TeamRocco all the way). If Dorinda didn’t want them there, then she should not have invited them in the first place.

At least Dorinda makes fun of herself during her confessional and owns up to most of her behavior during the party. The fact that she doesn’t seem too embarrassed about repeating “SNL dress” about a thousand times is what I love about her, despite her less than perfect manners.

I would say take a lesson from the former Countess about manners, but after a stint in jail and a costume with a giant afro and what that looked like blackface (even though she claims it wasn’t), I don’t think Luann is in any position to be giving hostess advice. Although, at least Luann immediately greeted Sonja when she walked in, which is more than Dorinda did.

Apparently, money can’t buy you good hostess skills, but it sure can buy a lot of orange bubbly drinks.

What do you think about Dorinda’s behavior? Do you think she’s still “hostess with the mostest”? Comment below!

one Comment for Hostess with the Least-est: The 4 Things Dorinda Did Wrong at her Halloween Party