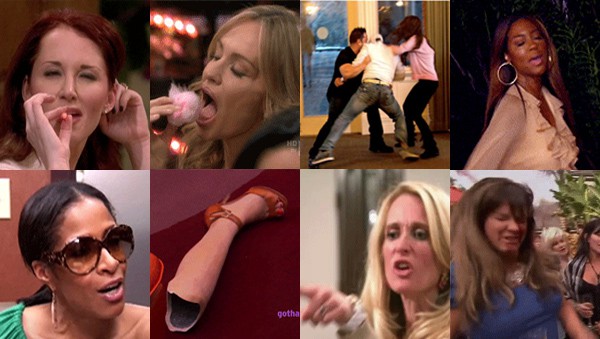 From unforgettable catfights to flying tables and legs… in no particular order, these are the most memorable moments in Housewives herstory!

1 . The Dinner Party from Hell

This Real Housewives of Beverly Hills Gif perfectly captures Season 1 Camille AKA everybody’s favorite Camille Grammer… and her psychic friend Allison Dubois was the cherry on top of that crazy cake! Check her out on our RHOBH Tour!

Who could forget this Real Housewives of Atlanta Gif? — Porsha. Sweet, sweet, Porsha Williams. Only she could make ol’ Harriet role over in her grave on The Freedom Trail Tour in Savannah, Georgia. Get tickets here.

In Real Housewives of New York Season 6 Episode 21, Aviva Drescher got a leg up on the other ladies… literally. Planned or not, she got us all to gasp with that flying fake leg at Le Cirque. Check it out on our RHONY Tour or make a reservation.

Tamra Judge started the wine/glass throwing tradition in this awesome RHOC Gif from way back on Season 6 Episode 13 with Jeana Keough . Here’s to hoping it doesn’t go anywhere soon! Also, check out all the wineries that have been on Real Housewives.

In this NeNe Leakes gif, she didn’t mind waving her so-called Trump checks around during her fight with Sheree Whitfield, but she has had less than flattering things to say about the “Orange Man” lately! BTW this happened in Atlanta’s upscale Atlantic Station.

Gotta love a morning after Real Housewives of New York gif. The guy LuAnne D’Whatever  hooked up with in Turks & Caicos may or may not have been married… but it’s cool. See all the places they went on their trip to the island during Season 7 Episode 13.

Who can forget this doozy from RHONJ Season 1?! If you visit, LuNello politely asks you save the table flipping for prison. Check it out on our RHONJ Tour! Also, who knew Teresa Giudice and Danielle Staub would be able to turn things around after this?!

A BIG part of us loved watching Alexis Bellino beat it after Tamra Judge threw her out of CUT Fitness. We could re-watch it on this Real Housewives of Orange County gif over and over! Sayonara Jesus Jugs! (Check out our visit to CUT Fitness with Eddy! (BTW he’s not gay btw, because Todd Chrisley said so.)

Clearly, kleptomania runs in the family for Kim and Kyle Richards. Re-watch the fight from RHOBH Season 1 Episode 16!

We’re kookoo for crazy Kelly Bensimon and the bizarre mental breakdown that happened on St. John island. You can stay at their lux villa: Presidio del Mar! Thanks for this silly RHONY gif, Kelly!

Congrats. Your eyes have an STD. Courtesy of Danielle Staub.

14. Let’s Talk About Your Husband

Classic case of what happens when you mix alcohols. That’s Lisa Rinna getting lippy with Kim Richards on RHOBH Season 5 Episode 15. Anywhoooo, see all the places they went in Amersterdam like this restaurant called Werck!

Holy molar! We knew Sonja Morgan was loose… but her tooth, really?! This Real Housewives of New York Gif is from Season 7 Episode 17. — Find out what it’s like in A Day in the Life of Lady Morgan!

The Real Housewives of DC might have just been a blip in the Housewives franchise (though we still love the fab Cat O’Manney), but there’s no forgetting Michaele and Tareq Salahi’s totally bizarro Obama obsession. They really made waves with that infamous White House breach!

Rumor has it you can still find smatterings of Joe Gorga’s black hair product on the walls of the Inn at Erlowest in Lake George, NY! Very few brain cells were lost during this kinda sexy moment from RHONJ Season 5 Episode 7.

This RHOA gif will make you giggle every time! The crazy fight in Cape Town, South Africa between Marlo Hampton and Sheree Whitfield even had NeNe Leakes scratching her head! The vacation rental was pretty sweet though!

20. Showdown in the Street

We live for this LeeAnne Locken gif! Yes, she might be a camera-attacking circus freak, but we love her for it! Re-watch the moment from RHOD Season 1 and then read our loaded interview with LeeAnne!

Thanks to Kenya Moore who went absolutely koo koo and left us with this little gem! This Gone With the Wind Fabulous gif happened at the Ani Villas in Anguilla – see all the places from their vacation here!

Bethenny Frankel has a special way of saying ‘Happy Holidays’. Why is it always Dorinda Medley’s house?! On that note…

This I Made It Nice Gif is appropriate for so many occasions!

Botox for brains! Adriana De Moura VS Joanna Krupa is the most surprising slap since Real World’s Irene/Stephen! According to TMZ, they’re bringing Real Housewives back to Florida!

Kandi Burruss’ not-so-sweet side came out at NeNe’s pajama party at the InterContinental Hotel in Buckhead. Things actually did get physical in Season 6 Episode 13 but that’s a whole ‘nother RHOA gif.

Quite possibly our favorite Ramona Singer gif! It’s from her eye-popping performance in RHONY Season 3!

29. You Will Never See My Face Again (until tomorrow)

The only thing scarier than Scary Island. The invariably awkward Alex McCord, everyone. — If this Real Housewives of New York gif isn’t enough for you, re-live her awkward beach moment with Kelly Bensimon here!

You might not recognize her, but that’s THE Shannon Beador gif! No shade, the girl is looking good again!

This magical moment between Ramona Singer and Kristen Taekman one of the better Real Housewives wine throwing gifs! But seriously, violence is about as cool as catching your husband on Ashley Madison!